Political Gerrymandering and the Midterm Elections

Will the recent political gerrymandering lawsuits affect the midterm elections?

Our two beloved political parties do what they can to take power. It’s no secret, and it’s often fair game. But this one method in particular has gained a lot of attention recently.

In the last several years, we’ve seen an increasing number of lawsuits challenging states’ line-drawing maneuvers. This report tracks five of these recent lawsuits and discusses how their results may affect the midterm elections.

First, let’s take a look at which states have competitive races for the 2018 midterms. This diagram analyzes only U.S. House races. 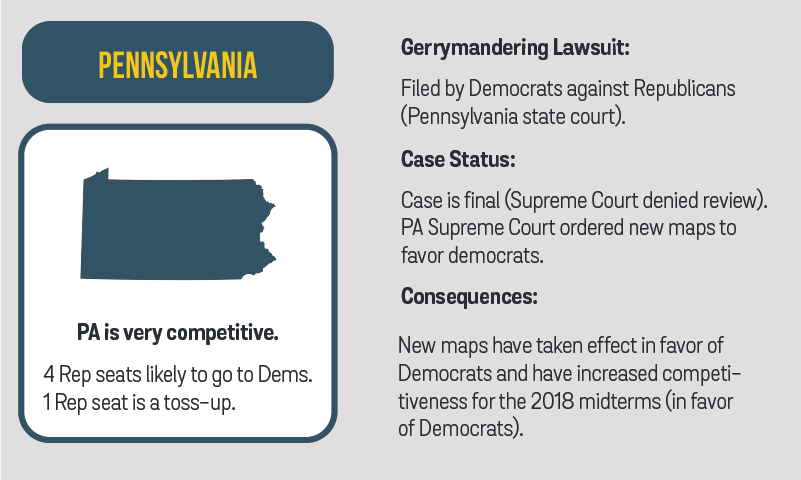 Pennsylvania is very competitive for the upcoming House elections, due in large part to the gerrymandering lawsuit.

The case in Pennsylvania has been decided in favor of the Democrats (the plaintiffs, or challengers). The PA Supreme Court ordered new maps that are, according to a political analyst from Cook Political Report, not just neutral but even pro-Democrat. The court not only reversed the Republican gerrymander but also helped Democrats reverse a disadvantage resulting from natural housing patterns.

With the new maps, the eighteen Pennsylvania U.S. House seats could go from 13-5 in favor of Republicans to an even split between the parties after the midterms.

The Republicans did resist the new maps’ going into effect, but they were unsuccessful at getting the Supreme Court’s attention. After the court’s order imposing the new maps in February, the Republicans requested an appeal from the U.S. Supreme Court. The Court declined the request, likely because the case was decided under Pennsylvania state law and not federal law — one step outside of the ideal realm for the nation’s highest court. 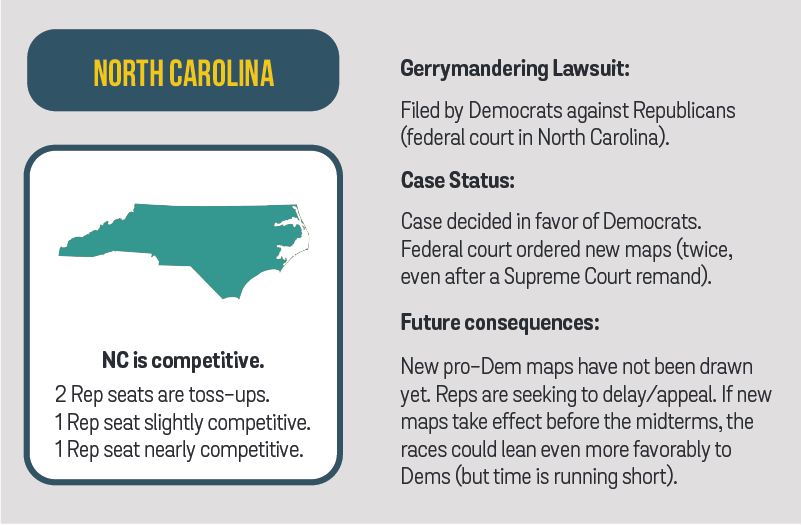 North Carolina could have been very competitive as a result of the gerrymandering lawsuit, but the court-ordered new maps will not take effect for the 2018 midterms.

This one will not affect the midterms, but it has already been decided in favor of the Democrats (the challengers). The ruling from the North Carolina court to draw new maps was pretty recent (August 2018), and the parties seem to have agreed that there isn’t enough time to get new districts set up for the 2018 midterm elections (Plaintiffs consented to holding off while the Republicans appeal to the Supreme Court).

For a full set of legal documents on this case, see the Brennan Center’s case page. 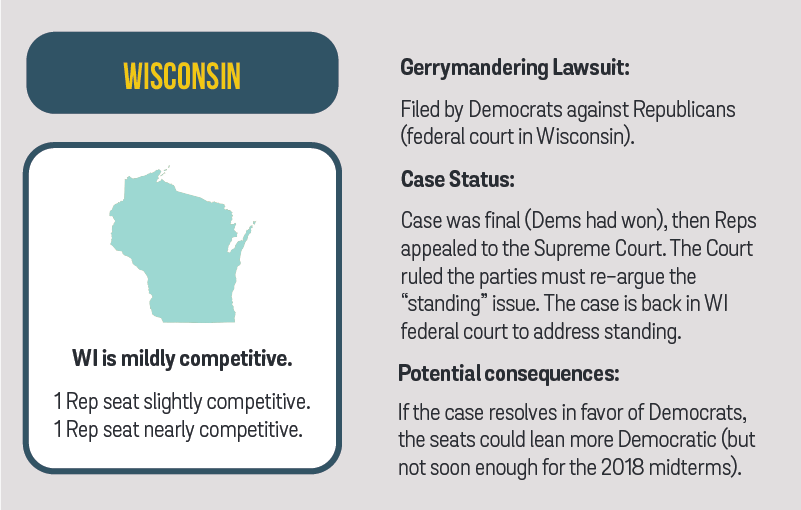 Wisconsin could have been more competitive if the Supreme Court hadn’t put the gerrymandering case ruling on hold. The trial court had ordered new pre-Democrat maps, but now the parties are back to resolve additional issues.

Wisconsin Democrat challengers to the Republican-drawn Wisconsin voting districts were in a pretty good spot, but after a Supreme Court ruling last term they’ve found themselves back in the lower court arguing again.

The Democrats had won this case. The federal court in Wisconsin had declared the Republicans had unfairly drawn district lines in violation of the Equal Protection Clause in the Constitution. New maps were to follow. Of course, the Republicans weren’t going to stop before attempting an appeal. So they went to the Supreme Court last term (Benisek v. Lamone).

Before the October 2017 term, the last word from the Supreme Court on political gerrymandering had been a 2004 case. The Court had actually said it may be impossible for courts to grant relief to plaintiffs. That’s what the Republicans were hoping to get – a ruling that political gerrymandering cases are “nonjusticiable.” Other court-watchers were excited about the alternative possibility — that the Court might once and for all declare how all courts should determine political gerrymandering cases. There’s still some confusion among lower courts about what tests to use. (More on this in Part II of our report, below).

Alas, however, the Court did neither. The Court decided the Wisconsin case appeal on a technicality. It did not say political gerrymandering cases are impossible to resolve; it did not tell lower courts how to resolve them. It just said: Well, in this case, it seems the lower court should re-evaluate an important issue called standing that it should address before we get into this big political gerrymandering standard-setting question.

So, the new maps will not affect the midterm elections. The parties are back in the Wisconsin lower federal court arguing about standing (same thing the NC parties had been sent back to do). And we’ll see how it turns out. The case could affect future elections in favor of Democrats. It could very well end up in the Supreme Court again. 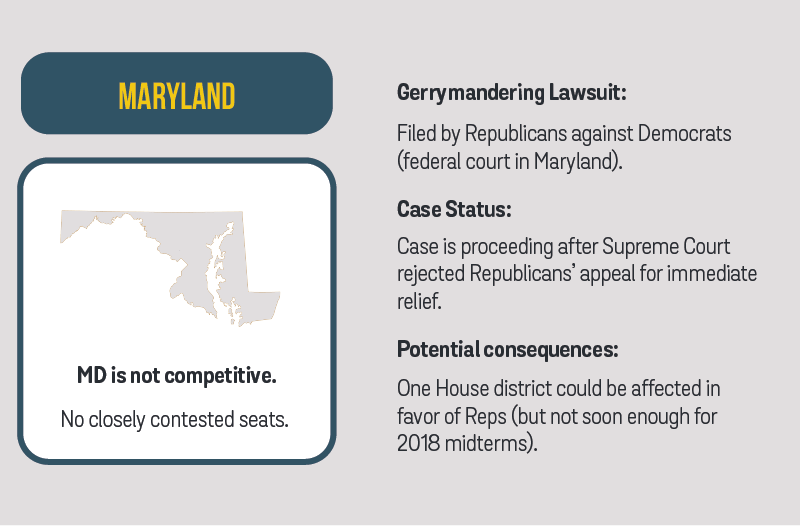 In Maryland, it was not the Republicans getting sued this time. It was the Democrats. The Democrats were in control of the re-districting process, and the Republicans accused them of illegal gerrymandering to effectively take away one particular U.S. House district.

The Maryland plaintiffs took an interesting route to arguing their case. Instead of using the Equal Protection Clause to frame the violation of law, they used the First Amendment’s right to Free Speech and Expression. By having their votes diluted through gerrymandering, the plaintiffs said they were having their First Amendment rights violated. We explained the difference between this argument and the Equal Protection argument here.

The case is still ongoing, but it’s already had some appellate action. The Republicans had sought a preliminary injunction from the Maryland lower court. They argued they had a good chance of winning and would face irreparable harm if the court did not stop the unfair maps from going into effect immediately. They lost (the request for temporary relief) in the trial court.

The Republicans appealed their failure on the preliminary ruling to the Supreme Court. This was the second political gerrymandering case the Justices decided to hear, so again, court-watchers were thinking: Ohhh maybe the Court wants to tell all the lower courts that they can use the First Amendment to decide political gerrymandering cases, and this case could tell us how!

But the Court did no such thing. The Court decided this case on other grounds, like it did in Gill v. Whitford (the Wisconsin case). This time, the Court used some factors that are only relevant to preliminary rulings in order to reject the appeal.

So the parties are back in Maryland federal court battling out all the important issues so that the Court can make a real (non-preliminary) decision on the case. And then we could see it back up at the Supreme Court.

But for now, no new maps. Maryland remains pretty expectedly blue for the midterms. 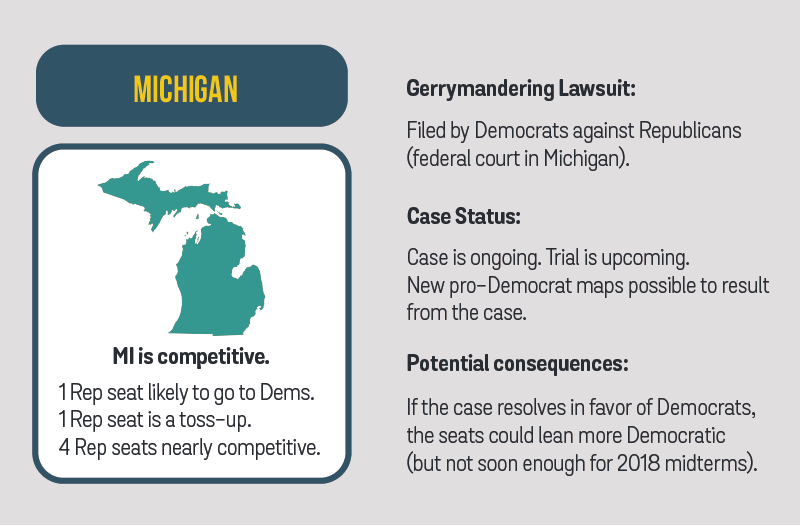 Michigan could end up very competitive if the Democrats can convince the court of their gerrymandering claims. The case is set for trial early next year.

Here we have the youngest of our political gerrymandering cases. Young but nevertheless maturing quickly through some appeals court action (nothing too major, and not in the Supreme Court yet).

In Michigan, Democrats alleged Republicans unfairly drew state legislative and congressional district lines so the Democrats’ votes would be diluted. The case was filed in December 2017, and the parties are proceeding with pre-trial stages. The Michigan state defendants already have successfully gotten one part of the challengers’ claims thrown out. The plaintiffs had alleged the lines were drawn unfairly on a state-wide basis and also on a district-wide basis, and the court has rejected the state-wide claims already. That all happened before the evidence was gathered.

This case will not affect district lines for the 2018 midterms, but we’ll see what comes of it.

For a full set of legal documents on this case, see the Brennan Center’s case page.

These political gerrymandering cases seem to have a lot of appeals and technical issues to resolve. What’s with that?

The obvious answer: They are big-deal cases. They could affect the distribution of political power for years to come. The parties will put plenty of resources into them and won’t give up easily.

The other answer: There is confusion within the federal courts about how to analyze the cases. Here’s why.

It’s fair until it’s not

The biggest question for a court in deciding whether gerrymandering is legal or illegal is the extent to which the partisan line-drawing happens. Parties in power can’t be expected to completely ignore politics (party affiliation) when they draw district lines. At least, that’s how it’s been for all of our nation’s history. To some extent, political gerrymandering is allowed. But it’s hard to know when gerrymandering goes too far. And the Supreme Court has hard a hard time articulating the rule.

How much is too much political gerrymandering?

The last couple of decades has exhibited the Supreme Court’s impotence in addressing political gerrymandering in the courts. While some lower courts have attempted to stop in-power parties from being too excessive about their selfish line-drawing, the cases that have reached the Supreme Court have been met with uncertainty.

The Justices usually are good about setting nationwide standards on how courts can determine legal claims. For example, as similar claims start to get appealed from different jurisdictions around the nation, and if lower courts are deciding the cases with inconsistent rules, the Supreme Court will take the issue and tell all the lower courts how to deal with it from then on.

So in this context, a political gerrymandering claim takes the form of:

The question is, then, what about the line drawers’ actions crosses the line from legitimate selfish line drawing (just a part of politics) to unfair line drawing (violating the Equal Protection Clause)? How can courts make one single rule that determines exactly when gerrymandering becomes invalid?

That is the question that the Justices have failed to answer. In 2004, it looked like the Court was going to admit defeat (Vieth v. Jubelirer). And this recent term, the 2017-2018 term, the Court addressed two cases in which it might have taken another stab, but the Court decided the cases on technicalities (Gill v. Whitford and Benisek v. Lamone).

We got our competitiveness ratings from Cook Political Report. Here is the list of House races that the organization has labeled “competitive” for the 2018 midterms.

We wanted a clearer way to label states as a whole (rather than by race specifically), so we analyzed the number of seats open in each state to determine how competitive the state is as a whole. Because Cook characterizes some races as not quite competitive but decided they were important to note nonetheless because of their potential to swing, we wanted to give those races credit, just not full credit.

Political Gerrymandering and the Midterm Elections 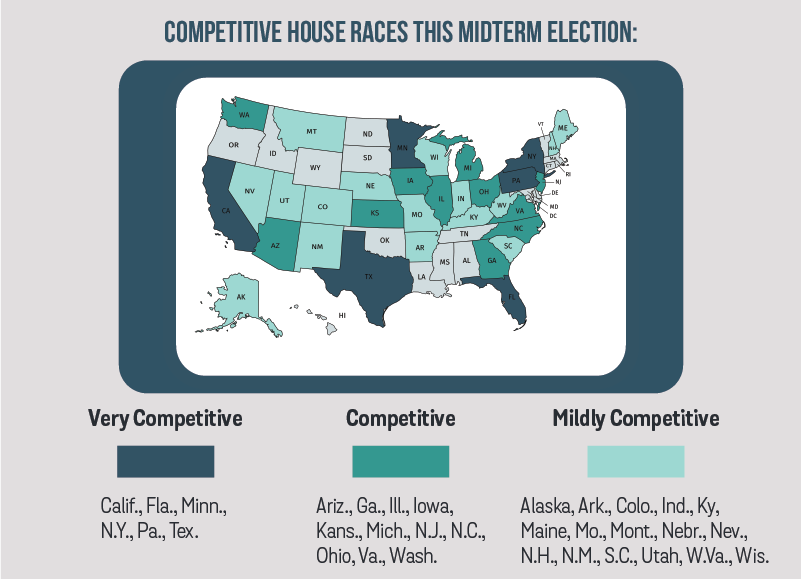