All that research on political gerrymandering… tuck it away for another term.

One of the biggest issues before the Supreme Court this term was political gerrymandering. Court followers anxiously awaited decisions in Gill v. Whitford and Benisek v. Lamone, both of which could have told the nation when political influence in districting goes too far.

In this case, the Democrats were complaining that the Republican authorities in Wisconsin drew the lines to ensure a Republican advantage. To demonstrate: Before the districting process at issue, Republicans with 43% of the vote won 46/99 seats (just over 46%) and after the process, Republicans with, at that time, 47% of the vote won 60/99 seats (just over 60%). See a helpful graph: NYTimes. The plaintiffs in this case – Democrat voters – said they were put into voting districts so that their votes would be wasted.

The problem with judicial interference in political gerrymandering is that state officials have always done it. It’s always been acceptable, at least to some degree. That’s different from racial gerrymandering, which is never acceptable – not to any degree.

But isn’t there a point at which political gerrymandering goes too far? Most people, including the Justices, would say yes. A political party cannot completely control the political process by drawing voting districts so obviously in its favor that the opposing party will never get a chance.

Turns out, though, as we explained here and here, it’s not so easy to determine when a party has drawn the lines so obviously – or too much – in its favor. Gill and Benisek asked the Supreme Court to articulate when political gerrymandering has crossed the line, and that’s the ruling everyone was hoping for.

You can save all that knowledge for another term. The Court didn’t even address how it would – or if it could – articulate a standard for controlling political gerrymandering. But it did make a very fancy ruling on “standing.”

Check out the infographic for more explanation of the injury issue and the ruling.

So what happens next?

Without an adequate showing of injury, the case cannot go on. But the Court did not say the plaintiffs have no chance of showing adequate injury. The Court sent the case back so the plaintiffs could have another shot.

Thus, although the Supreme Court did not have to address the big political gerrymandering question this time, this very case could come back. 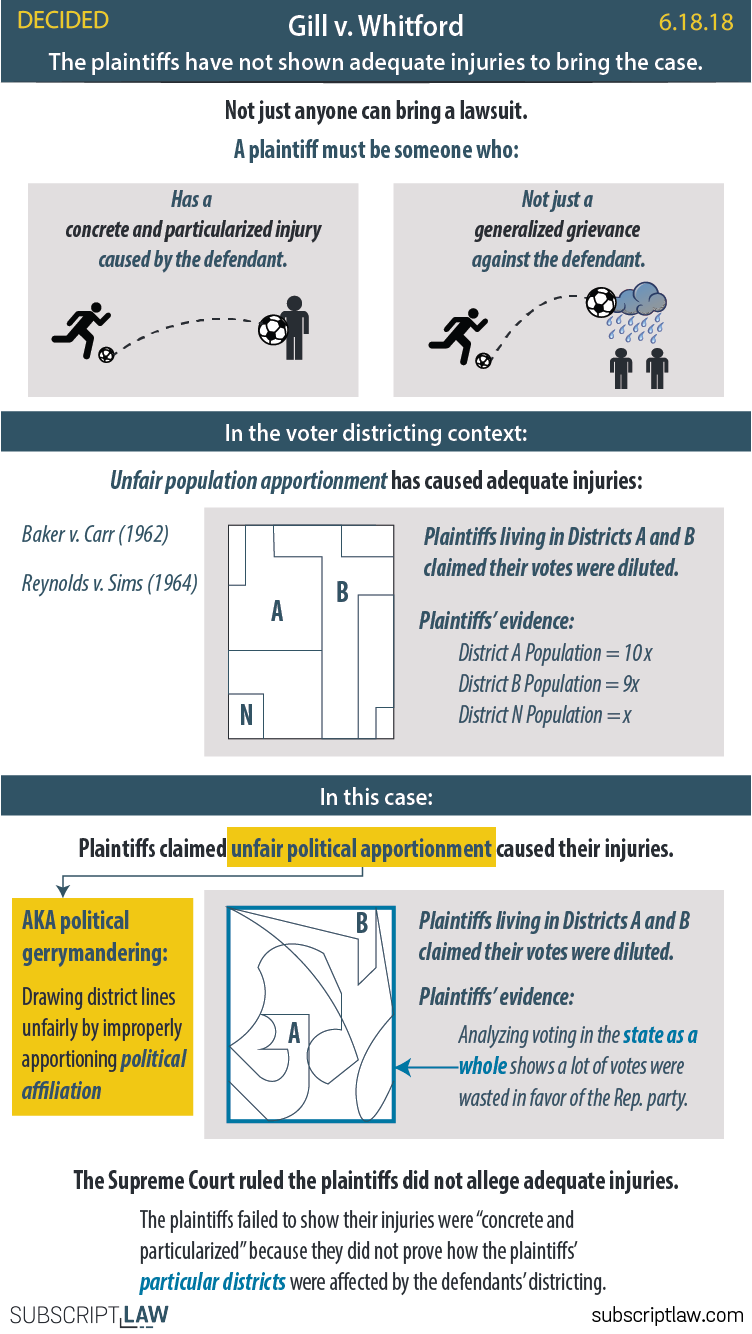