Political gerrymandering: Supreme Court, come and get me!

The Justices of the Supreme Court are experts in legal articulation. In fact, it’s fair to presume that no one in the country is better suited to spit legal game than the Justices. Yet the concept in this case has stumped them for years.

What is political gerrymandering?

Political gerrymandering is a sly method that state officials may use to draw district lines so they can influence election results. Officials in charge of drawing voting districts have used it for years. It’s a common part of politics, and it’s acceptable – to a degree. When one party is in control of the districting process, it will try to ensure the voting districts are lined up to give itself more political power for the next election. That’s just part of the game.

But when does the game go too far? Everyone agrees the point-of-excess exists, but the Supreme Court has failed to identify it.

The Maryland Republicans brought a new argument to the political gerrymandering lawsuit. Past challenges against political gerrymandering argued that the practice (in excess) is a violation of the Equal Protection Clause of the Constitution. Equal Protection is about discrimination, and the argument says that excessive discrimination on the basis of political affiliation is illegal – particularly when it harms an individual’s right to vote.

But the Maryland Republicans did not make an Equal Protection Clause argument. Instead, they tried a different tack. They urge the Court that the First Amendment has the legal standard to resolve political gerrymandering claims.

The First Amendment is about free speech and exercise. It protects political speech, which would include voting. One corollary of protecting speech is making sure that your speech choices cannot be held against you. In other words, the government cannot “retaliate” against you because you exercised free speech.

What’s the difference? It’s all about how the Court evaluates Equal Protection versus First Amendment Retaliation claims. The Maryland Republicans thought, if the Court has gotten stuck with the Equal Protection evaluation (i.e. it has not been able to articulate a standard), then let’s help the Justices view it in a different way. They might have gotten this idea from one of the Justices anyway. Justice Stevens, dissenting in one of the earlier political gerrymandering cases (Vieth v. Jubelirer), indicated the First Amendment route could have some merit.

The infographic: a comparison

In our infographic, we’ve compared the Equal Protection arguments of other cases with the First Amendment Retaliation argument in this case. The Equal Protection arguments highlighted include Vieth v. Jubelirer and Gill v. Whitford. In Vieth, the Court issued a Plurality opinion saying political gerrymandering could not be evaluated because it was too hard to determine a standard. The Court rejected the plaintiffs’ attempted methods of showing intent to discriminate and discriminatory effect.

Gill, however, has not been decided. The case was heard earlier this term, and the decision will come out by June. The Court has not identified whether it has a problem with the various issues the infographic highlights. It may be important to note, however, that one of the choices in the effects prong for Gill (the first choice), is the only articulation that attempts to identify the point at which political gerrymandering becomes excessive. That articulation comes from the lower court in Gill. The Wisconsin district court actually added a temporal indicator to determine when political gerrymandering becomes excessive: if it is likely to persist throughout the decennial period. Maybe that’s what the Court will need.

Lastly, consider how the evaluation differs in this case, Benisek v. Lamone. While the First Amendment looks at the issue through intent to retaliate and harm + causation instead of intent to discriminate and discriminatory effect, it’s hard to say the elements are too different in practice. The standard still may fail for lack of determinacy and/or failure to identify the point-of-excess. Note, also, another difference between this case and Gill: In Gill, the lower court used the Equal Protection standard to invalidate the political gerrymandering plan. In this case, the court would not, under the First Amendment standard, put a hold on the plan. Of course, that difference could just indicate that the plan in this case was not as glaringly bad; or it could indicate that the standard is not useful. 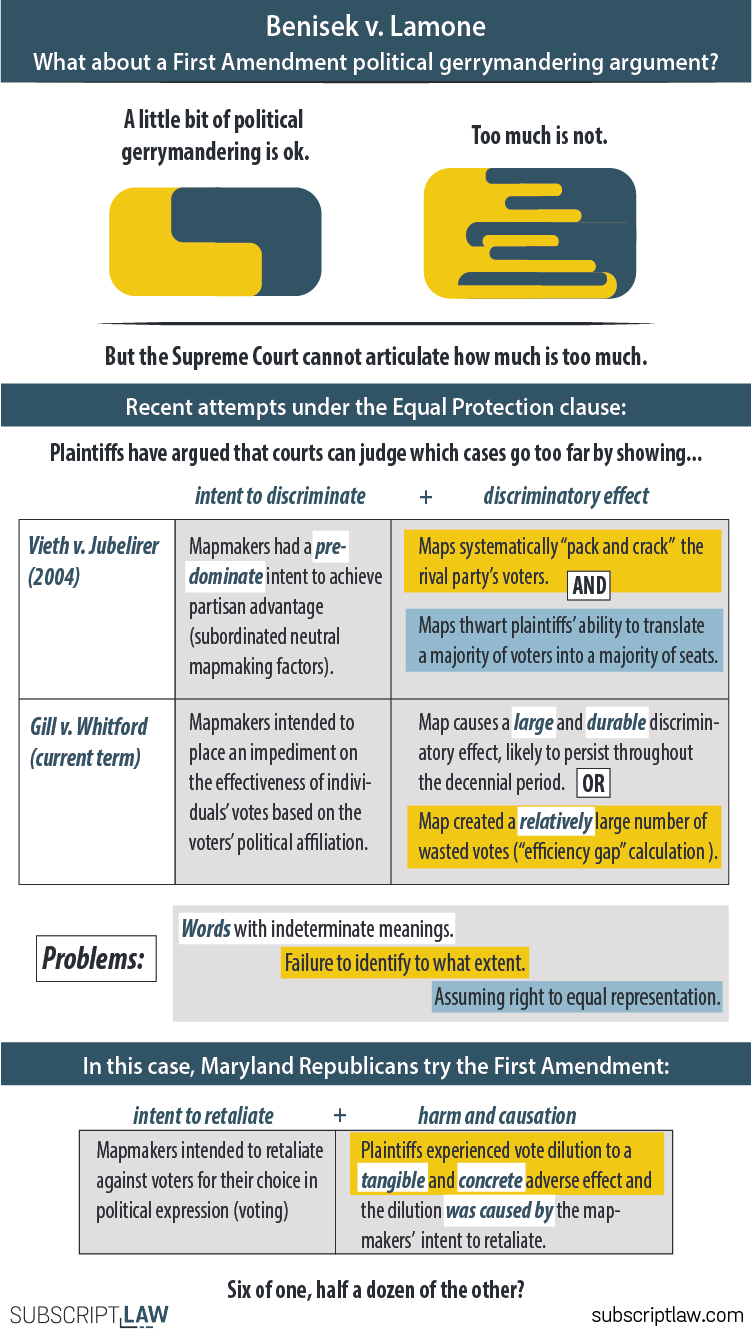