Remember when the Supreme Court declared that corporations get First Amendment protections?

We highlight this controversial case as we anxiously await several important Supreme Court decisions of the current term. Citizens United stands at the intersection of two of the term’s main themes:

Another topic getting a lot of hits this term is the First Amendment. The Justices will be outlining the boundaries of free speech in several different cases. Citizens United determined who can claim First Amendment protections, while four cases of this term (Masterpiece Cakeshop, NIFLA v. Becerra, MVA v. Mansky, and Janus v. AFSCME) will decide what types of expression deserve strong protection. Of course, that list doesn’t even include the Travel Ban Case (Trump v. Hawaii), which considers the First Amendment’s separation-of-church-and-state requirement (similar to a religious discrimination argument).

Citizens United was a nonprofit corporation that funded a movie trashing Hillary Clinton in the lead-up to a primary election. Federal law at the time would have stood in Citizens United’s way because the law (the BCRA) prohibited corporations from funding “electioneering communications.” A corporation (including a nonprofit) could not fund – at least not outside of a PAC – any broadcast, cable or satellite communications that refer to a candidate for federal office. The Federal Election Commission had further qualified that any communication – like a movie – that would be publicly distributed to a bunch of people (50,000+ in the relevant state) would be included in the ban.

Citizens United sued to keep the government from banning the movie. The litigation was an offensive action on the part of the nonprofit (i.e. it sought a declaratory judgment). Among its arguments was the Big One – that a corporation could claim First Amendment rights just like a person could. If that’s the case, Citizens United claimed, the BCRA’s ban on electioneering communications was a violation of Free Speech.

The BCRA ban was indeed a ban on corporate speech.

The Justices started by clarifying that yes, the BCRA was a ban on corporate speech. It said of course, the purpose of the ban was to limit the amount of speech that was out there. That came by virtue of the ban’s limitation on spending by corporations. Spending was considered intrinsically instrumental to speech.

What about the PACs? It’s true that a corporation could avoid the ban by setting up a PAC, a Political Action Committee, to fund its communications. However, the Justices reasoned that a PAC was too burdensome. First a corporation would have to set it up (not a trivial task), and then it would have to maintain it with tons of regulatory and filing requirements, and furthermore, PACs can’t accept money from everyone; they are limited in that regard. So a PAC wouldn’t do it. Corporate speech was still burdened.

The Justices gave the following examples of communications that would have been banned under the BCRA, as if to suggest the absurdity of the ban:

Corporate speech is as good as personal speech.

The majority went on to outline the importance of speech in America:

“Speech is an essential mechanism of democracy, for it is the means to hold officials accountable to the people. The right of citizens to inquire, to hear, to speak, and to use information to reach consensus is a precondition to enlightened self-government and a necessary means to protect it. The First Amendment ‘has its fullest and most urgent application’ to speech uttered during a campaign for political office.’ ”

The majority, thus, was very skeptical of any regulation that would try to limit speech based on the identity or the viewpoint of the speaker. And when it thought about identity, it made no distinction between corporate identity and natural identity (real personhood).

The majority reviewed whether corporations enjoyed the constitutional privileges of natural persons in past cases. It turns out, the Court noted, corporations often did. First, there is a line of cases starting in the 1800s that allowed corporations to take advantage of the 14th Amendment’s “equal protection” guarantee. And more recently, regarding the First Amendment, yes: the Supreme Court had decided in 1978 (First Nat’l Bank of Boston v. Bellotti) that corporations are entitled to Free Speech.

That would basically do it for the Justices.

Ah, in fact they can. Even when a court decides to look very skeptically at a law/regulation, the law could still pass muster. In order to do so, the government would have to prove it had a compelling interest and that the law is narrowly tailored to achieve that interest.

Turns out, in 1990, the Supreme Court had ruled the government did have such a compelling interest to regulate corporate speech in politics. That case was Austin v. Mich. Chamber of Commerce. In Austin, the Michigan Chamber of Commerce wanted to fund an ad in a local newspaper supporting a certain candidate for political office. The ad would have been banned by a state law restricting corporations from using their general (non-PAC) funds from funding such communications. So, aside from the law being a state law ban instead of the federal law ban in this case, the case was pretty similar. (Note: the First Amendment applies equally to state versus federal law bans.)

The Supreme Court in Austin declared that the government had a compelling interest that justified its ban. Keeping corporate money out of politics, it said, was an important way to keep money from distorting the political process. Furthermore, the ban’s restriction was narrowly tailored to achieve this anti-distortion rationale.

But the Supreme Court in Citizens United decided to overrule Austin. It said that the anti-distortion rationale wasn’t good enough. The Court said that compared to burdening free speech, keeping money out of politics wasn’t important enough. It noted that everyone (consider wealthy individuals) use money to further their speech. And corporations shouldn’t be singled out as different, just because they are very different than people.

The dissent noted some of the differences between corporations and people, in arguing against granting corporations equal First Amendment protections:

“Although they make enormous contributions to our society, corporations are not actually members of it. They cannot vote or run for office. Because they may be managed and controlled by nonresidents, their interests may conflict in fundamental respects with the interests of eligible voters.”

“The financial resources, legal structure, and instrumental orientation of corporations raise legitimate concerns about their role in the electoral process. Our lawmakers have a compelling constitutional basis, if not also a democratic duty, to take measures designed to guard against the potentially deleterious effects of corporate spending in local and national races.”

This issue continues to divide the country today. 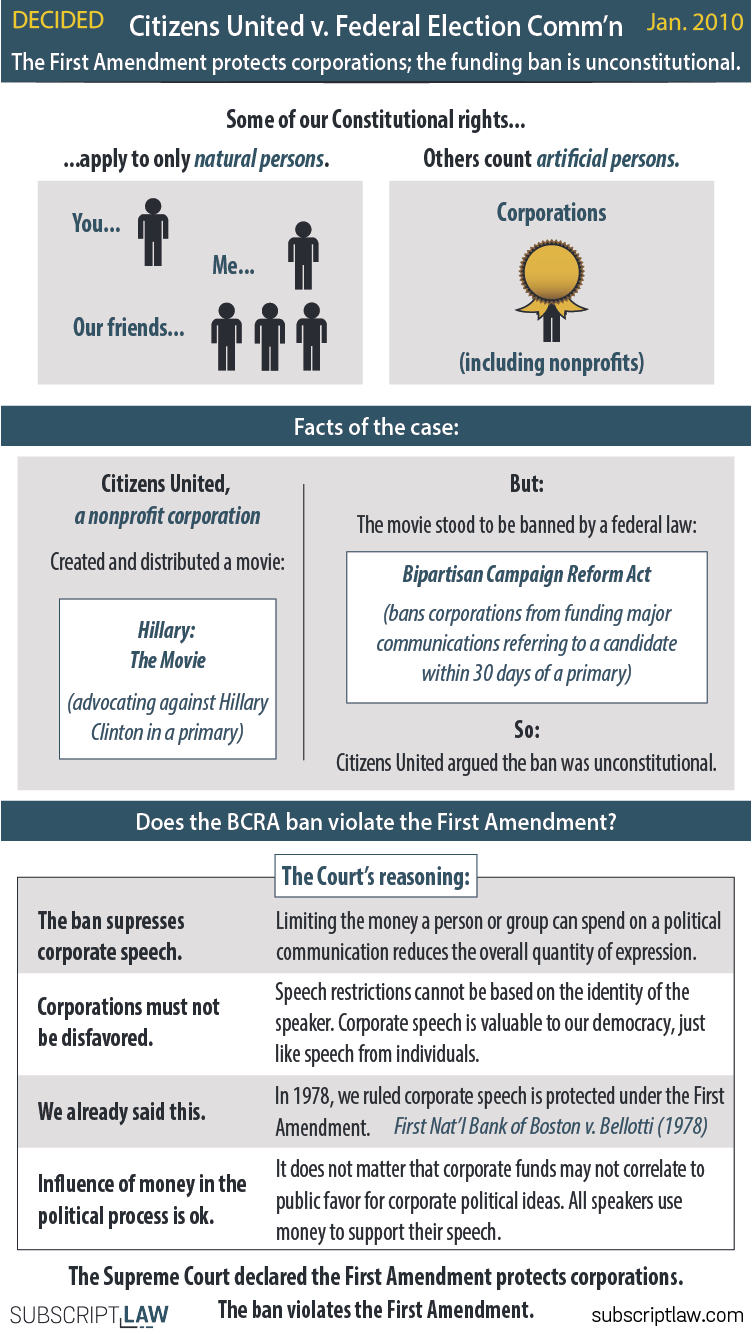