This case has been decided. See how it turned out!
View Infographic

The federal court in Texas denies giving Texas legislators the stamp of approval for the state’s 2013 voting maps.

Texas’ recent issues with its voting maps started in 2011. The 2010 census had shown enormous population growth in Texas which required the state to update its voting districts. Texas also had received 4 additional Congressional seats, so it needed to fit 4 more districts into its Congressional map. In 2011, Texas legislators drew up new voting district maps which sourced the first of several litigations, including this one in the Supreme Court today (Abbott v. Perez).

After Texas approved the 2011 maps, several civil rights groups (primarily African-American and Latino groups) challenged them as racially discriminatory. They argued Texas engaged in racial gerrymandering: drawing the maps with the intent to dilute the votes of people in certain race classes (i.e. not allow African-American and Latino voters equal participation in the voting process). The practice is illegal under federal law.

Both the Voting Rights Act and the Constitution prohibit states from discriminating based on race when they set voting standards, practices or procedures. The civil rights litigants pointed out that the new plans showed a dilution in voting strength for Latinos and African-Americans, when in fact the maps should have evidenced the opposite because Latino and African-American populations accounted for around 3/4 of Texas’ recent population growth (Perry v. Perez, Supreme Court, 2012).

In 2011, when the racial gerrymandering challenge was filed, the Voting Rights Act contained a provision which required Texas (and certain other historically racist states) to get federal “preclearance” (approval) before making any voting procedure changes, such as changing the voting maps. So Texas had – at the same time – set off to get its approval in federal court in D.C., which was the court authorized to give pre-clearance.

While Texas sought federal preclearance, the racial gerrymandering case, which had been filed in federal court in Texas, was placed on hold. The court in Texas would have to defer to the ruling of the court in D.C., so it was waiting for the outcome.

While the case in Texas was on hold, the state was left without a valid voting map. By February 2012, the court in D.C. still had not made a ruling, and the 2012 elections in Texas – at least the primaries – were coming up quickly. The court in Texas was given the task of approving temporary – interim – maps that would cover for the upcoming elections. The court would not be able to make these up entirely on its own. It had to defer to the judgments of Texas’ legislators (i.e. basing its maps on a Texas-legislature-created map), but it also had to “take care not to incorporate into the interim plan any legal defects in the state plan,” (Perry v. Perez, Supreme Court, 2012).

In reviewing Texas’ 2011 maps, the court conducted an expedited analysis on whether the maps were discriminatory. It did not have the time, nor the authority, to dig as deeply into the facts as it would do for a full analysis. It made “only preliminary conclusions that might be revised upon full analysis.” It used the preliminary conclusions to make the interim maps – imposing revisions on certain areas of the maps and specifically stating that certain other areas were okay. In the end, it reconfigured 9 of the 36 districts in the Congressional map and reconfigured 28 of the 150 districts in the State House map.

When the court approved interim maps, despite that it was a preliminary ruling and not final, it still made some specific conclusions about the 2011 Texas map. It said that certain districts were not drawn discriminatorily. And the court’s opinion spent a considerable amount of text to explain that. For example, Congressional District 27, around the city of Corpus Christie, was declared acceptable, and so was Congressional District 35, between Austin and San Antonio. “The court spent six pages explaining why CD27 did not [discriminate],” and “seven explaining why CD35 was not a racial gerrymander,” (Texas’ brief).

This will become relevant to Texas’ argument in the case before the Supreme Court now. And the part above – the difference between a preliminary review and a regular full analysis review – would become important to the opposition.

What happened in the D.C. preapproval case?

The whole reason interim maps were necessary was because the case in D.C. was expected to answer the same questions that were in the case in Texas. So what did it rule?

The federal court in D.C. ruled against Texas. It rejected Texas’ request for preclearance. It said it could not approve the 2011 maps because – as the court in Texas recognized – the maps were drawn with discriminatory intent. The ruling meant that Texas would have to either go back to the drawing board, or finish the proceedings in Texas. Or both, until the civil rights litigants and the court in Texas were satisfied.

The litigants in the court in Texas – those who challenged the Texas maps from the start – now had the D.C. federal court ruling in their favor. The D.C. court had agreed the maps were discriminatory. They would hope to get the maps reconfigured even more dramatically than the interim maps had done.

However, the D.C. federal court ruling would not have an impact for long.

In 2013, the Supreme Court ruled in a case you may have hard about. Shelby County v. Holder was a major challenge to the Voting Rights Act, specifically the section that required federal approval of certain states’ voting structures. In Shelby County, the Supreme Court ruled that the federal government no longer had the right to require pre-approval on states’ voting maps. With Shelby County, out went the D.C. federal court ruling. It became irrelevant immediately.

After Shelby, the Texas legislators had gotten around a significant hurdle. But now what to do about that pesky litigation in Texas that was continuing to argue the same question?

Texas – knowing the court in Texas had already approved the interim maps – decided simply to approve those plans.

It figured – hey, the court has already approved these maps; so it can’t overrule itself and say they’re discriminatory now. After all, the court is the one that drew them up! The legislators’ thought process was revealed in a letter from then-Attorney General Abbott to Texas’ Speaker of the House, who said that adopting the interim maps was the “best way to avoid further intervention from federal judges” and to “insulate the State’s redistricting plans from further legal challenge” (Western District of Texas opinion at 35).

The Texas legislature’s lawyer also advised this route, although he recognized the potential hiccup. He noted that the court had not made final determinations when it approved the interim plan, and that there were still unsettled issues the court would have to review, (Western District of Texas opinion, at 35-36).

The court would have none of it.

Once the court conducted its full review of Texas’ 2013 intent, it declared the 2011 discriminatory intent could very well – and did – carry over. The court said, “The discriminatory taint [from 2011] was not removed by the Legislature’s enactment of the Court’s interim plans, because the Legislature engaged in no deliberative process to remove any such taint, and in fact intended any such taint to be maintained but be safe from remedy,” (Western District of Texas opinion, at 39).

Then, the court got specific at which areas needed to be fixed – above and beyond those fixed by the interim plan. It concluded that two of the districts it said were fine in 2011 – Congressional Districts 27 and 35 – are actually not. To justify its change of heart, the court said, “In light of all the evidence and a full consideration of the record, the Court found that its preliminary conclusion concerning race predominance was erroneous,” (Western District of Texas opinion, at 101).

And that was that. That’s the decision that is being appealed now.

Texas objects to both the general conclusion that the 2011 intent can carry over and also the specific conclusions about Congressional Districts 27 and 35. It says the court is overruling itself and acting inconsistently without good justification. 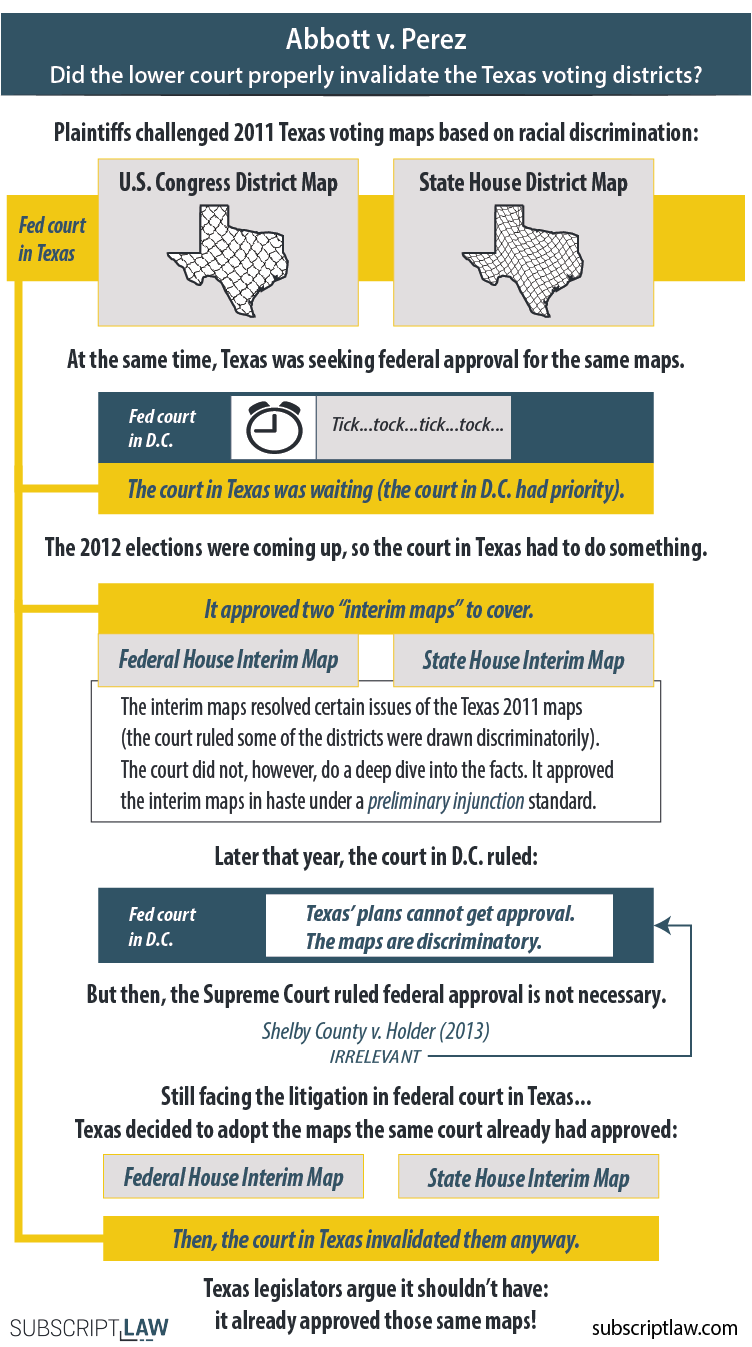