Some cases are just complicated.

Abbott v. Perez has a complicated “procedural history.” That means it had a lot going on in various courts. We reported fully on it here, but in short:

Texas got sued for drawing its voting districts unfairly – by discriminating based on race. The case got paused because there was a bigger case in the federal courts related to the federal law at issue. During that time – while the case was on hold – the court went ahead and approved some interim voting maps so that Texas could at least hold elections.

After the big deal federal case was resolved, the Texas case got going again. When Texas was preparing for the case (the re-start), the districting authorities said, You know, let’s just approve the maps that the court approved for the interim period. It was possible that the maps were still unlawful for a couple of reasons: 1) the court had only reviewed them under a temporary standard; and 2) a federal court had – during that holding period – found a couple issues of discrimination that might have persisted in the interim maps.

But nevertheless, Texas decided that would be the best way to resolve the case quickly.

In the Supreme Court

In the Supreme Court, Texas argued the lower court had no right to invalidate the districts that it had already approved. If the districts were ok in 2011, they must have been ok in 2013 when Texas re-approved them.

The majority vs. the dissent

Our infographic describes the conflict between the conservative and the liberal wing of the court in resolving the issue. The conservative justices came away with the win. To understand better the procedural rule guiding the dissent, see our infographic on Standards of Review.

We’ve outlined the main question the Court decided in the case. That is, any legislative districts that the lower court ruled invalid just because it distrusted Texas’ intent are ruled valid. However, after answering that question, there were still 4 districts that the lower court invalidated for different reasons (on independent grounds). Of those four, the Supreme Court found that only one of them was actually an impermissible racial gerrymander.

If you want to see how the Court whittled down those four, you can read the opinion starting at page 32. Or, as always, SCOTUSblog does an in-depth argument analysis. 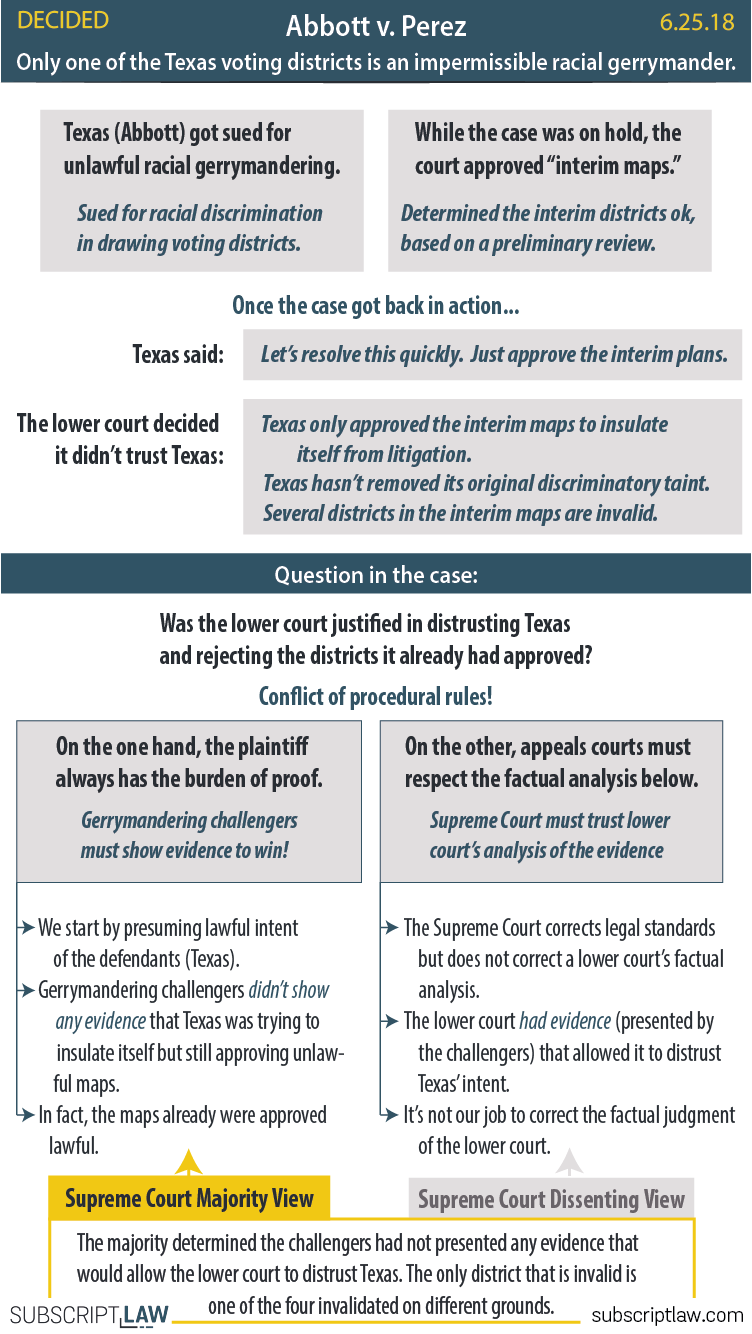