WesternGeco owns four patents relating to a process for oil discovery that is used to perform surveys for oil companies. WesternGeco charges a fee for providing the surveys.

The presumption against extraterritoriality

U.S. patents generally do not prohibit actions abroad. A patent in the U.S. is only good to keep others from copying your technology in the U.S. This applies to other areas of law too. Unless the law specifically says it applies abroad, it does not. For example, in 1991 the Supreme Court ruled that U.S. employment protections do not apply to workers abroad (EEOC v. Arabian American Oil).

But this rule – the “presumption against extraterritoriality” – gave rise to a loophole in the patent context. Companies started doing what ION did here. They would develop parts of the technology domestically and then send those parts abroad to complete the copy. In 1972, the practice appeared in the Supreme Court, and the Court – bound by the presumption against extraterritoriality – declared that existing patent law was unable to stop it (Deepsouth Packing  v. Laitram). Congress responded by closing the loophole with the provision that is relevant in this case, the prohibition against “combination.” Section 271(f) said you cannot send parts of a patented product abroad with the intent that the parts be combined into a U.S. patented product.

Damages under the “combination” provision

The appellate court applied the “presumption against extraterritoriality” to deny WesternGeco the massive amount in foreign lost profits. But does the presumption apply to damages?

The Supreme Court ruled in favor of WesternGeco, that the damages award for foreign lost profits was acceptable.

The Supreme Court analyzed the case under the framework set out in a 2016 case, RJR Nabisco v. The European Community, 2016. In RJR Nabisco, the Court determined that it would first analyze whether the statute’s text provides a “clear indication of an extraterritorial application.” In this case, the Court skipped this step and went straight to Step 2. Step 2 asks whether the case involves a “permissible domestic application of the statute, even if other conduct occurred abroad.”

In Step 2, the Court analyzes the “statute’s focus” – the provision in light of its function for the whole statute – to determine if the conduct in the case is domestic or foreign.

The Court determined the statute focuses on domestic conduct AND the infringement that occurred was the domestic act of supplying components in or from the U.S. Thus, the case involves a domestic application of the statute and the presumption against extraterritoriality  will not keep WesternGeco from getting damages resulting from the infringer’s conduct abroad. 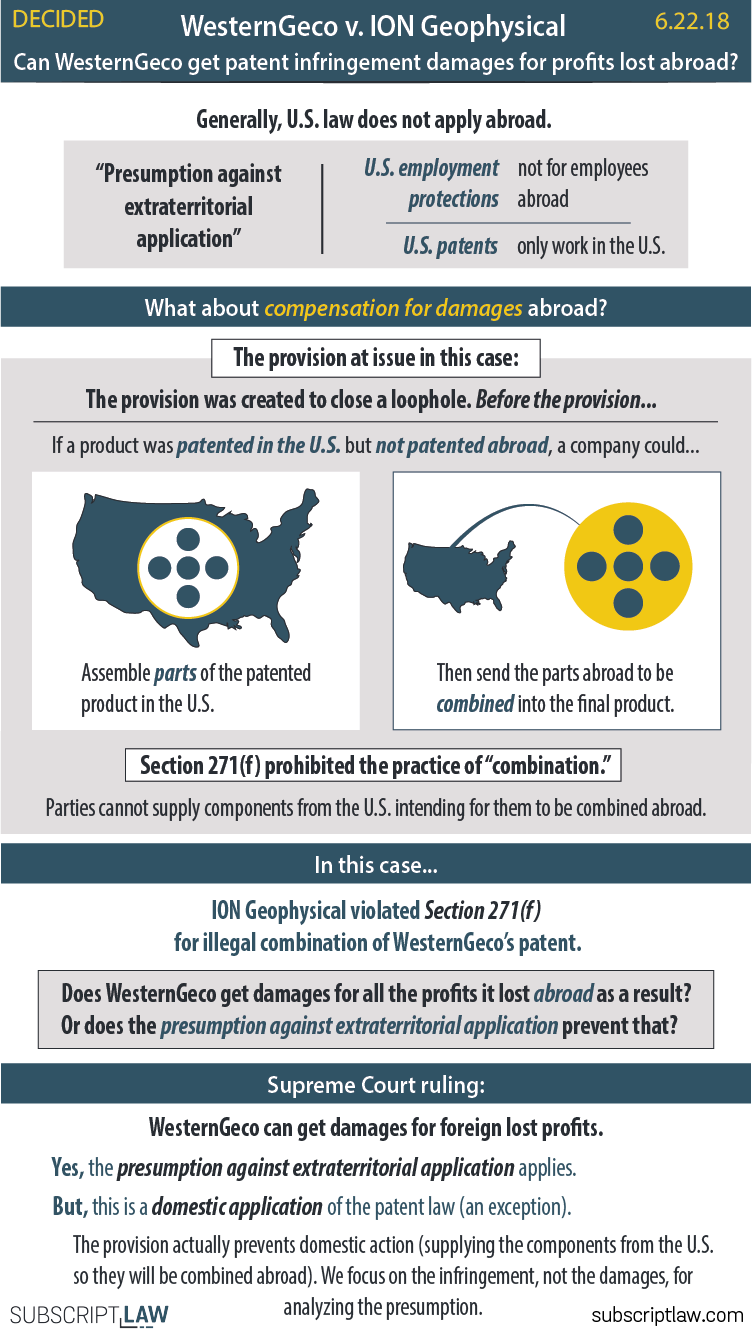