The Supreme Court ended a challenge to a court shackling policy, declaring the case “moot.”

One of the federal court districts in California has a policy of placing full shackles on people during court proceedings. Criminal defendants must wear chains (handcuffs attached to a waist chain attached to foot shackles) before they are even convicted of crimes. The U.S. Marshals Service, responsible for court safety, justified the practice with “safety concerns arising from understaffing, past incidents of violence, and the high volume of in-custody defendants produced in the Southern District.”

Four people who faced these practices (supported by public defenders who see the issue affect many more) challenged the practice as unconstitutional. The Supreme Court wasn’t poised to determine the constitutionality of the shackling practice. The appeals court (9th Circuit) had already ruled in favor of the challengers (Sanchez-Gomez and three others) and ordered the practice to be stopped. However, the U.S. argued the case shouldn’t have gotten that far in the first place. The U.S. argued the challengers’ case was “moot.” And they were right.

According to the Constitution, courts can only hear live “cases or controversies.” When a person brings a case, the person complains of an illegal practice and then asks the court to grant relief. A person cannot request relief on behalf of someone else. The complainant must have a personal stake in the outcome. Furthermore, the need for the relief must remain throughout the case. Once the relief is no longer necessary, the case becomes “moot.”

The Class Action Exception: But so many other people still need the relief.

It’s true that this case was brought by four people, but the resolution of it would have benefited many more: namely, all of the people who will face pre-conviction shackling. So, in a sense, it’s like a class action case. It seeks to create large-scale change.

Class actions have a special feature that allows them to avoid mootness. In a class action, the court allows certain class representatives to seek relief on behalf of a whole group of people. Once a class is certified, even if the class representatives’ issues are “mooted out,” the case does not get dismissed as moot because there continue to be people in the larger group who need relief.

The Capable-of-Repetition Exception: The practice is inherently short-lived; It’ll never last through a litigation.

Because legal proceedings take a while, there are some practices that’ll never continue long enough to make it past mootness. The capable-of-repetition-yet-evading-review mootness exception covers that. Consider Roe v. Wade, for example. Pregnancy only lasts nine months. And a major litigation could take much longer. But because Roe was capable of getting pregnant again and facing the same issue (being prohibited from getting an abortion), the case avoided mootness under this exception.

That’s the other mootness exception the challengers tried for. But the Court was unwilling to grant it. The court said we cannot assume the four people in this case will get arrested again and be subject to pre-conviction shackling. It’s too hypothetical. No exception here.

The Supreme Court dismissed the case. Here is a link to the opinion. 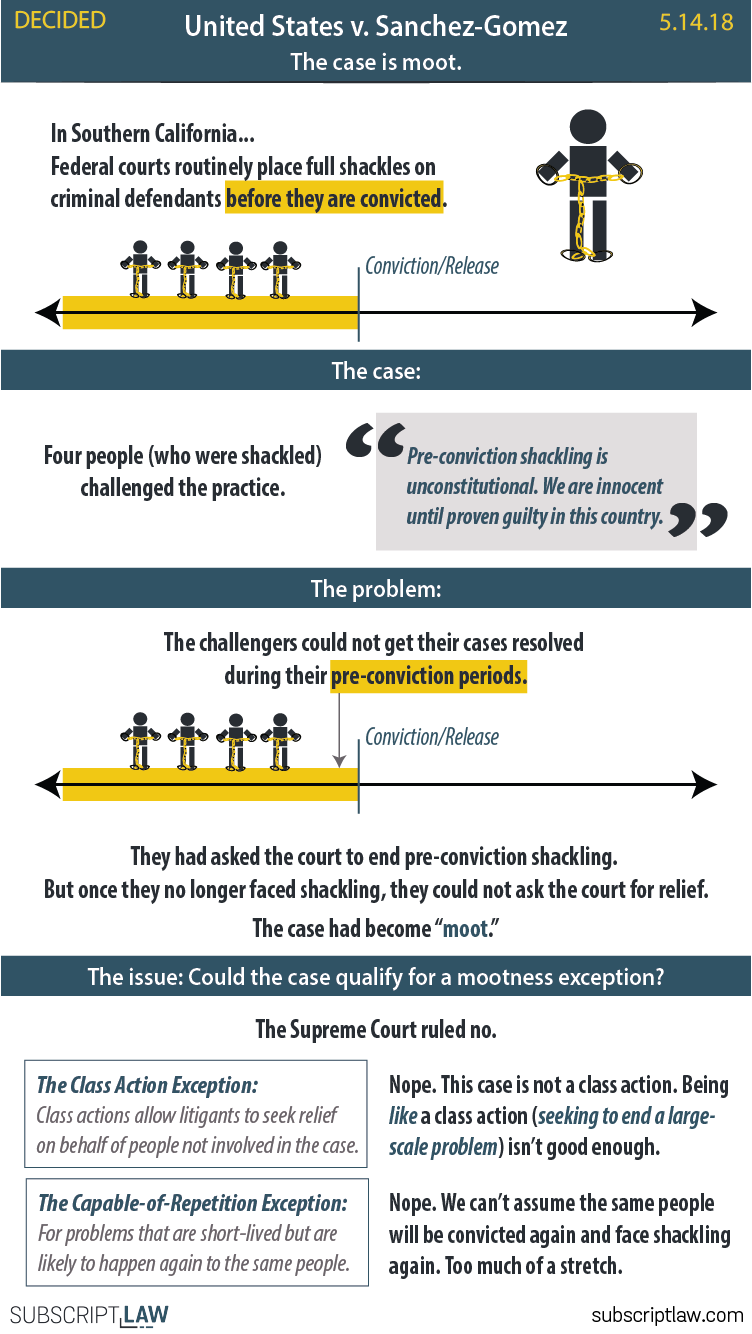