This case has been decided. See how it turned out!
View Infographic

The appeals court counted the detainees’ lawsuit as a class action to avoid a procedural failure. What will the Supreme Court think of that move?

The 9th Circuit Court of Appeals gave the plaintiffs a break in this case. Detainees in a federal court region sued the government for a district-wide practice of shackling defendants during court proceedings. People are supposed to be innocent until proven guilty in this country, so unless the judge believes a defendant is likely to cause harm by being unrestrained, un-convicted people should not be shackled. However, the Southern District of California decided that it would institute a district-wide policy of routinely shackling detainees, without determining first whether each shackle is justified. The court region said it was understaffed, so it would be safer that way.

First, what if I was harmed and the person stopped harming me, but I suffered damages. I still need money to repair the damages. In that situation, your case is not moot. You still need the relief, so you still have a case. But if all you were asking the court to do was to tell the person to STOP harming you, then the case is over. After all, what good would a court judgment be, if the relief is not necessary?

Now, consider an exception. Suppose that although the person has stopped harming you, the person is likely to repeat the practice. For example, a stalker lives in the neighborhood and although the person has stopped following you right now, there’s nothing stopping the stalker from doing it again. In that case, you can qualify for an exception: “capable-of-repetition-yet-evading-review.” This exception is for a case in which the defendant could stop and start the practice, and you really need the court to issue an “injunction” against the person, a legal decree declaring the action illegal.

“Capable-of-repetition” is easier to get for an entire class

Often, class actions – especially civil rights class actions (against the government) – are asking the courts to force the government to STOP engaging in a harmful practice. A class for class action purposes represents all of the individuals who are suffering from the challenged practice. Getting a class “certified” can be critical to avoiding mootness. Let’s use this case as an example.

In this case, a handful of detainees are plaintiffs. They brought the case, and they are asking the court to tell the government to stop the shackling policy. They aren’t the only ones suffering from the shackling policy, and they want the court to stop the practice for everyone. For each individual plaintiff, however, that person will only face shackling during the pendency of the person’s criminal proceedings. Once a given detainee’s process is over, the detainee will no longer be an un-convicted detainee anymore.

Generally, that would make the case “moot” as to the particular detainee. The detainee no longer needs relief. However, if we think about the entire class of people who are being exposed to the practice (being shackled on an ongoing basis), of course someone still needs the relief. Thus, on a class-wide consideration, the case is not moot. But a class was not certified in this case…

From the government’s perspective, a group of plaintiffs cannot get a class-wide consideration of mootness without having a class properly “certified.” Proper class certification is not trivial, and it was not done in this case.

There is Supreme Court precedent for this – kinda. The 9th Circuit hinged its ruling on a 1975 case, Gerstein v. Pugh. Gerstein was a case in which defendants in criminal cases challenged the right of the government to hold them while they awaited trial. Thus, like this case, it was a challenge-to-pre-trial-detention-procedures. The Supreme Court addressed mootness in that case in a footnote (n. 11). Although Gerstein was a class action (a proper class was certified), the footnote appears to consider mootness without regard to the class certification and solely in regard to the nature of the harm (its temporariness and its broad applicability).

So, the 9th Circuit used the logic in that footnote, as the 9th Circuit had done before (admittedly, also in a class case) to rule Sanchez-Gomez and other detainees’ case not moot. 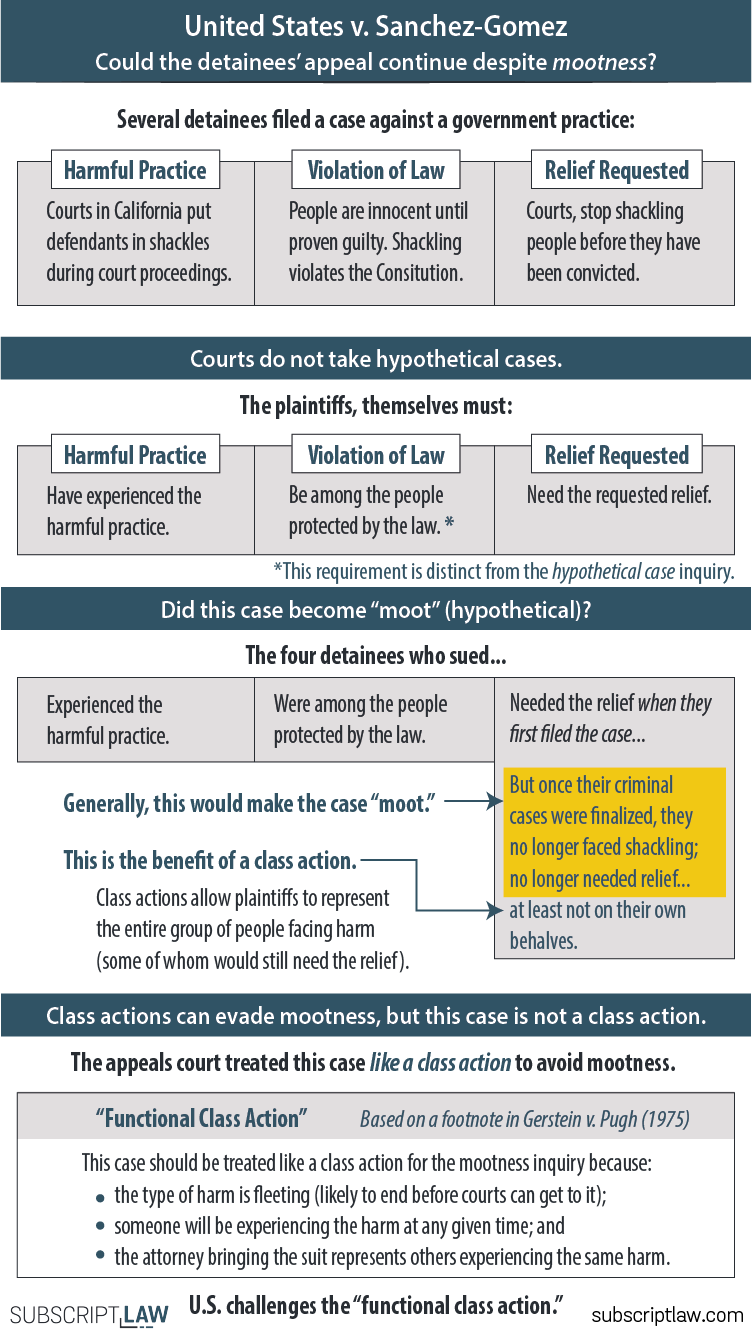