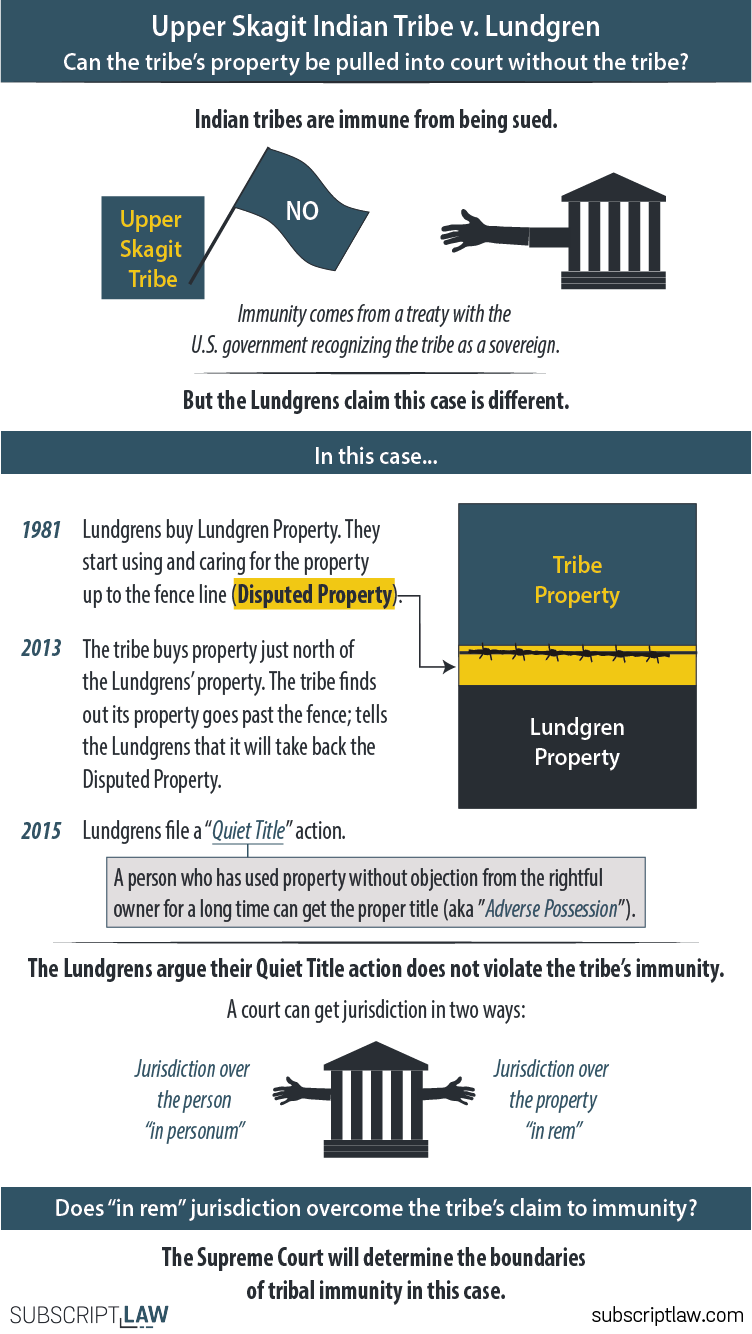 The Supreme Court will determine the boundaries of Indian tribes’ immunity from litigation.

When the U.S. government recognizes an Indian tribe, it agrees to the tribe’s sovereignty. That means the tribe can rule itself, particularly on land formally entrusted to the tribe. That also means the Indian tribe cannot be sued in U.S. or state courts. There are two accepted exceptions to a tribe’s immunity from suit: 1) the tribe consents to the suit, or 2) an act of Congress permits suit against the tribe (federal laws may state the situations in which a tribe may be subject to suit). The Upper Skagit Indian Tribe purchased a piece of land in 2013 and found out later that the property line was actually past the southern fence. The previous landowners and southern landowners, the Lundgrens, had always acted like the fence marked the property line. The Tribe told the Lundgrens that it would take back that strip of land and put up a new fence.

Property law does not like wasted land. It sounds like a strange statement, but property law includes some rules to ensure that land is never wasted, or just sitting. One of the rules of the “no-waste” principle is called “Adverse Possession.” If a property owner does not use the owner’s land for a period of time and someone else does, the user of the property can actually take ownership after a period of time.

That’s what the Lundgrens did. They filed a claim for “Quiet Title” (the type of filing to get property through Adverse Possession). “We have been using (and taking care of) this property since 1981, and our extended family has been using it since 1947, so the strip is ours.”

The Tribe objected to the suit, claiming it cannot be sued because of its sovereignty. “You can’t sue us, and you can’t take our property because we do not consent to entering in this proceeding.”

The Washington state court denied the Tribe’s request for immunity. The court said the tribe itself can be immune from suit, but this case is about the tribe’s property. In fact, in Adverse Possession actions, the court doesn’t need the owner of the land at all (the owner has been absent!). The court just needs jurisdiction over “the thing” (in rem jurisdiction).

The Washington court and the Lundgrens believe that tribal sovereign immunity is not implicated for “in rem” jurisdiction. The Tribe and the federal government (which has filed a brief in support of the Tribe) would call this an additional “exception” to immunity, which is improper.

Some Indian tribe property is actually entrusted to a tribe from the federal government. These are the “reservations” that have some of their own governing rules. But a tribe can own property outside of the entrusted land too. The disputed land here is of the latter sort. The Tribe purchased it under regular Washington state law, and it is not part of federally-entrusted land (although it may be at some point).