Supreme Court decides not to rule on tribal immunity because the oral arguments raised a new question.

The Upper Skagit Indian Tribe purchased a piece of land in 2013 and found out later that its property went beyond the fence to the south. But for years, the fence had always been treated as the property line. The southern landowners, the Lundgrens, cared for the property for a very long time, without objection by anyone. But the Tribe wanted its property. It told the Lundgrens that it would take back that strip of land and put up a new fence.

The Lundgrens were not going to give the property up without a fight. So they filed a claim to “Quiet Title” in court.

Property law does not like wasted land. It sounds like a strange statement, but property law includes some rules to ensure that land is never wasted, or just sitting. One of the rules of the “no-waste” principle is called “Adverse Possession.” If a property owner does not use the owner’s land for a period of time and someone else does, the user of the property can actually take ownership after a period of time.

That’s what the Lundgrens were attempting with the claim for “Quiet Title.” In short, “We have been using (and taking care of) this property since 1981, and our extended family has been using it since 1947, so the strip is ours.”

One hiccup for the Lundgrens: Indian tribes enjoy a special status when it comes to being sued. In general, they can’t be. “Tribal immunity” comes from treaties between the U.S. government and Indian tribes. Treaties “recognizing” a tribe’s status would give them the right to be immune from lawsuits in the U.S. It’s one aspect of sovereignty (self-rule) that the U.S. gave to tribes, in exchange for other things (like property).

So the Upper Skagit Tribe claimed its right to immunity, and the Lundgrens argued against it.

The Lundgrens won on their exception-to-immunity argument in the lower courts. Our earlier report on the case outlines the in rem versus in personum jurisdiction distinction. But during oral arguments at the Supreme Court, the Lundgrens acknowledged that the Washington courts (the lower courts) had improperly relied on a case to reach the conclusion. Instead of continuing to argue the same exception, the Lundgrens argued for a different exception to immunity.

Supreme Court sends the case back

Instead of analyzing the new exception to immunity, the Supreme Court decided to send the case back to the Washington courts to consider it. The parties will have to wait – and continue in the lower courts – for resolution of their land dispute. 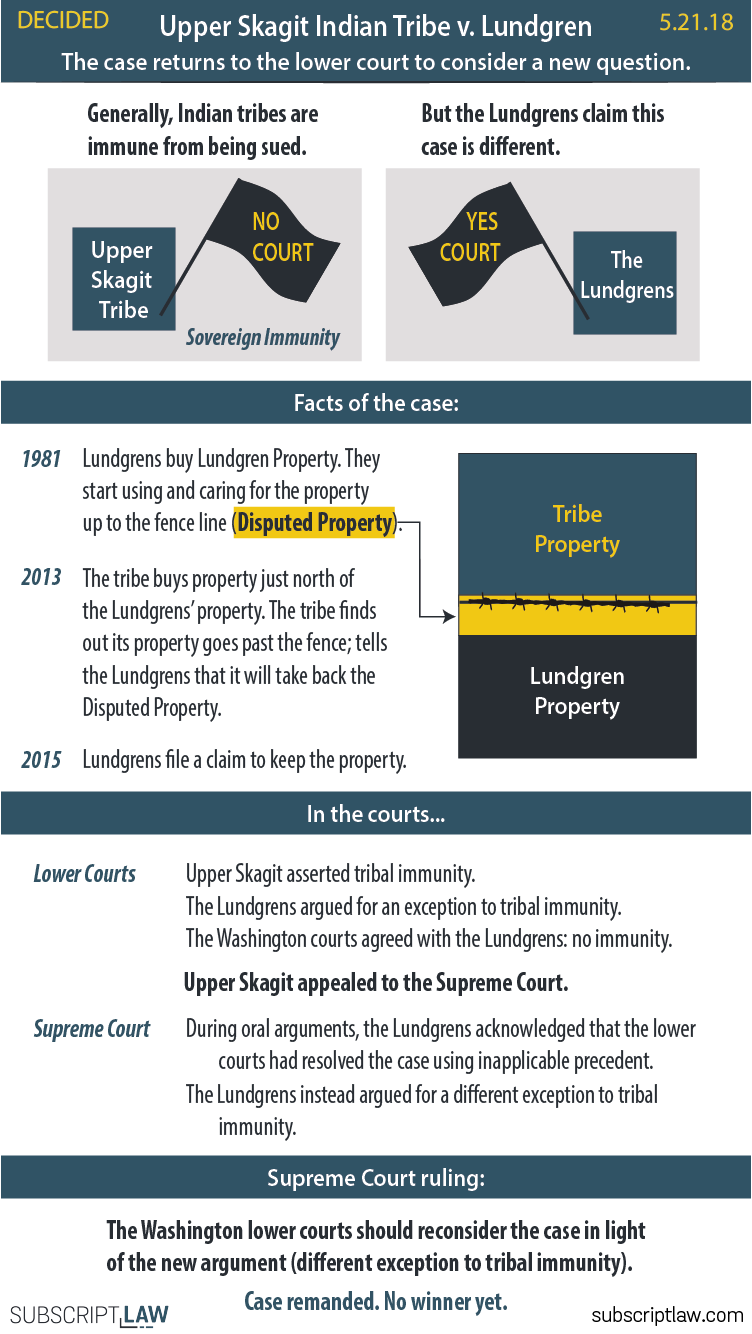