Can the Court strike the travel ban without addressing religious persecution at all?

The Supreme Court is gearing up finally to hear arguments over Trump’s Travel Ban. The parties – Trump and co. versus Hawaii and co. – will stake out their positions before the Court on the last day of the argument schedule, April 25, 2018.

Onlookers will be waiting to see if the Supreme Court rules the executive order (that is, the Travel Ban) is discriminatory towards Muslims and Muslim countries. However, there are two main arguments against it, and one of them isn’t based on discrimination. It’s based on Presidential/executive authority. We want to outline the “authority argument” – especially because the lower court (the 9th Circuit Court of Appeals) ruled it the winner – in addition to explaining the religious discrimination argument.

What version are we on?

In case you are confused about what version of the “travel ban” is still alive and in the Supreme Court this term, start here:

Not the first version. That one was amended after Trump got adverse rulings from several federal courts. It never reached the Supreme Court.

Not the second version. That one expired in September 2017 while litigation against it was pending in the Supreme Court. Because it expired, the Justices threw out the Supreme Court case (dismissed as “moot”).

Yes, the third version. Trump’s third version of the “travel ban” made a few little tinkers to Version 2. The changes were intended to help Version 3 get past the inevitable future legal challenges. Indeed, one of these Version 3 challenges has arrived at the Supreme Court this term. The Court will hear the case on the last day of arguments, April 26, 2018.

For one change, the government responded directly to a preliminary order made by the Supreme Court. While the Supreme Court was considering Version 2, it said the ban was not likely to pass muster to the extent that it applied to travelers who had a “bona fide relationship with a person or entity in the United States.” The Court explained that people who had close family in the U.S. or had been admitted to a U.S. university probably should not be subject to the ban. Thus, in Version 3, the government carved out an exception for people in this category.

The other two main changes that showed up in Version 3 were issues that other (lower-than-Supreme-Court) federal courts had pointed out about Version 2. The two appeals courts that got their hands on Version 2 (the 4th and the 9th Circuits) each rejected it, but for different reasons. Trump and co. made edits to try to address – at least on a surface level –  the issues that each court found.

The 9th Circuit said V2 was likely to violate federal law because the President did not make good or clear enough findings that national security interests justified the particular travel ban policies. It said the Immigration and Nationality Act gives the President authority to create emergency orders, but it must show its rationale with specific findings. Thus, when the administration went back to the drawing board for V3, it did a more clear documenting of its rationale.

The 4th Circuit took a different route – a more direct route – in ruling against Version 2. The 4th Circuit said V2 was plainly discriminatory against Muslims in violation of the First Amendment’s Establishment Clause (the Constitution). It did not dilly dally with the President’s authority under federal legislation. It said, nope. The Constitution doesn’t allow discrimation, and that’s clearly what this is. Thus, surprisingly enough, when Trump and co. went through their new and thorough V3 policy process, they happened also to add a few non-majority-Muslim countries to the list. That would relieve any suspicion that V3 was religiously-motivated.

Enough about the past. What’s up now?

To no one’s surprise, Version 3 ended up back in the courts, and V3 was rejected afresh by the 9th Circuit Court of Appeals. Remember, the 9th Circuit is the one that rejected V2 based on federal law and NOT the Constitution. It used federal law again in regards to V3, but for a different reason:

Before, in regards to V2, the 9th Circuit said the President didn’t make strong enough findings for its travel ban policy (i.e. did not show that people from the countries it had chosen were likely to be problematic for U.S. national security). For Version 3, however, the President went back and showed the policy’s rationale with stronger documentation. This time, the policy determined that travelers from countries that have bad “information-sharing” practices and bad “identity management” practices would be blocked. This policy – the government decided – would catch the terrorists. Based on this policy, the government pulled together a bunch of country reports to determine which countries to apply the ban to. The new policy caught five of the six Muslim countries originally targeted (Iran, Libya, Yemen, Somalia and Syria), plus North Korea, Venezuela and Chad.

With this difference, the 9th Circuit could not as easily take issue with the President’s findings. But Version 3 seemed suspicious in a different light.

Trump obviously appealed. And that’s where we are today. The Supreme Court will decide if the 9th Circuit was right.

And the discrimination argument?

The Supreme Court also has agreed to address the Establishment Clause argument, despite that it’s not the basis of the 9th Circuit’s ruling. Remember the 4th Circuit  – the other appeals court – ruled against V2 on grounds of religious discrimination. In accepting to hear the Establishment Clause question, the Court has brought the Constitutional discrimination argument to life again. That means the challengers, Hawaii and co., will have an additional route of challenging Version 3. Trump must win on both arguments in order for Version 3 to proceed. The challengers only need one.

For more information on the Establishment Clause argument, see our earlier “retro” explainer on the issue (created when V2 was in the Supreme Court). Forgive us for lacking a coherent color palette at the time.

Other immigration Supreme Court cases of this term: 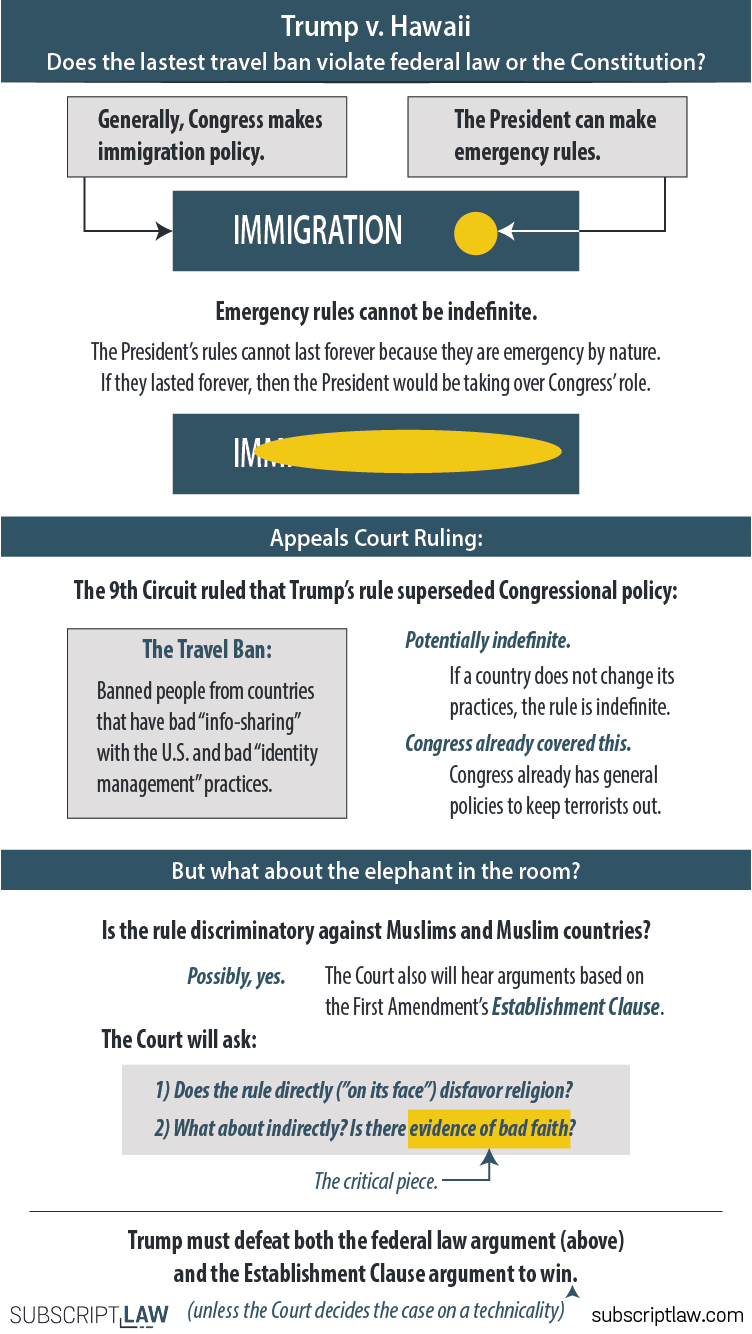