Trump’s travel ban stands. We broke down the heart of the Justices’ disagreement.

There were two main arguments challenging Trump’s travel ban. That is, the third version of it. But it was the Constitutional argument that brought out the gloves.

Was the government really out to discriminate against Muslims and Muslim countries?

The Constitution’s Establishment Clause prohibits the government from discriminating on the basis of religion. So the Court was set to determine whether Trump’s executive order passed the religious discrimination test.

And the “test” is really what made the difference. How harshly would the Court review the President’s rationale supporting the executive order?

The majority of the Court (Roberts writing with the support of Kennedy, Thomas, Alito and Gorsuch) set the winning standard. The Court ruled as long as the executive order was religiously neutral “on its face” – meaning, it did not directly discriminate against religion, the Court just needed to make sure that the regulation was “rationally related” to a “legitimate government interest.”

This is called rational-basis review, and it’s notoriously easy for a government to pass.

And pass, it did. Trump’s executive order was justified for national security interests – certainly a legitimate government interest. And the order had plenty of reasons in there relating the specifics of its order to national security. That ended the inquiry for the majority.

There were two separate dissents, one written by Breyer with Kagan’s support. And the other was written by Sotomayor and signed-onto by Ginsburg. The Sotomayor dissent was the lengthy one.

Sotomayor said the Court should not have given the Constitutional question such a “watered down” standard of review. The opinion cited several cases in which the Court has applied a heightened standard. In any case, she went on after outlining numerous accounts of anti-Muslim sentiment by the President and his team, it wouldn’t matter. The executive order wouldn’t even pass rational-basis, in her view. Simply, the executive order is “inexplicable by anything but anything but animus.”

The case asked whether Trump’s executive order should be stopped temporarily while the full trial continues. So the decision determined, no, it shouldn’t be stopped in the interim. The challengers could still have a chance at proving discrimination in the full trial, but it’s not looking good. 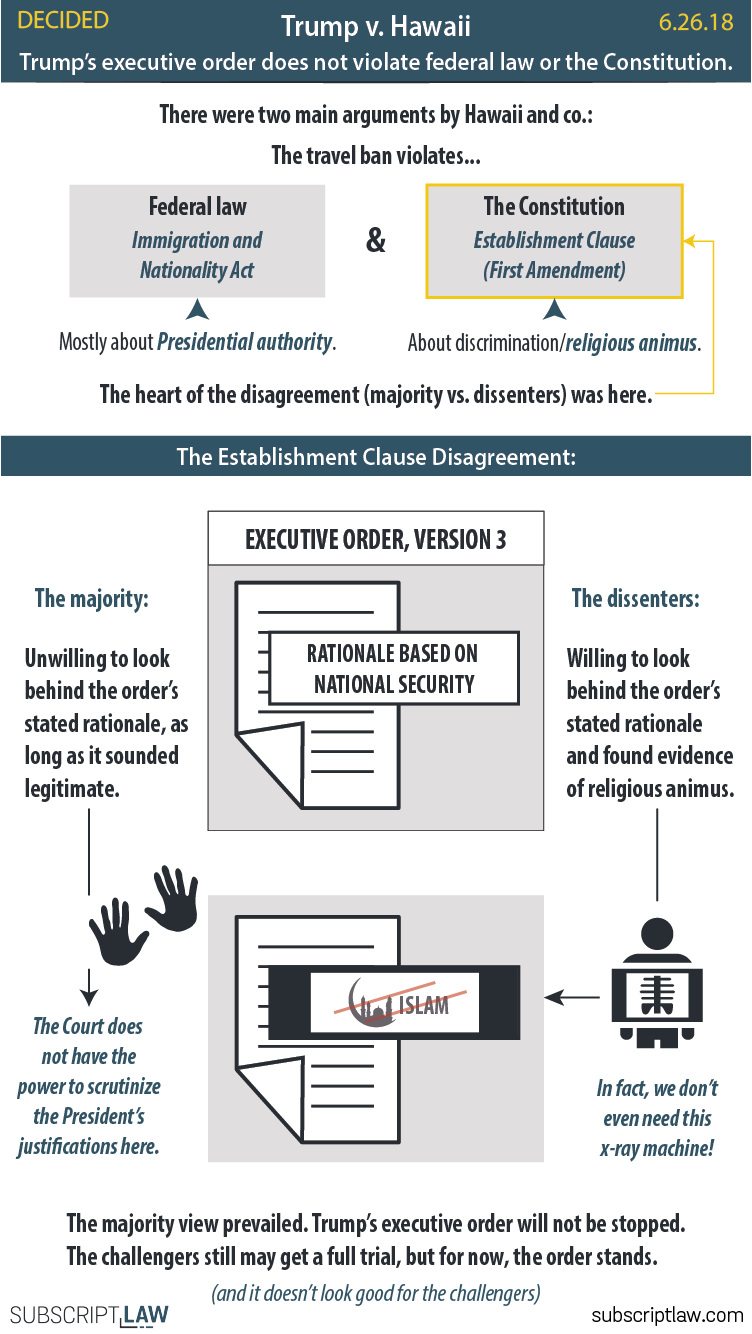