Sveen’s ex-wife loses out on the life insurance proceeds after the Supreme Court rejects her argument.

The Supreme Court ruled against Kaye Melin’s Constitutional argument yesterday, leaving a Minnesota law in tact. The result: Mark Sveen’s kids get the life insurance money instead of his ex-wife.

Minnesota passed a law in 2002 trying to help people ensure their life insurance proceeds went as intended. The law made the assumption that when people divorce, they don’t intend to leave their ex-spouses as life insurance beneficiaries. So the law will automatically revoke your ex-spouse designation when you get divorced. If you want to leave the ex-spouse listed, you’ll have to take affirmative action to work around the law.

When Mark Sveen and Kaye Melin got divorced, the Minnesota law applied to Sveen’s life insurance policy. Melin’s name got kicked from the policy, and Sveen’s kids (now adults) stepped in line.

But Melin had an argument that the law shouldn’t have applied in this situation. That’s because Sveen’s life insurance policy was written and signed before 2002, when Minnesota passed the law. She argued that Minnesota doesn’t have the right to go back in time to affect contracts that were not aware of the law. That’s a retroactive effect, and it violates the Constitution.

The Constitution’s Contracts Clause says that states can’t interfere with private contracting. Of course, there are limits, especially nowadays. For examples, states can ban contracts for servitude and the more more modern examples of unfair contracting that you’ll see consumer and employment laws restrict.

But Sveen argued that in this case, the state was not justified.

There’s a two-step analysis that the Court considered to determine whether the Minnesota law (its retroactive effect) violated the Contracts Clause. Turns out, the Court didn’t need to reach Step 2.

Step 1: Does the law substantially undermine the contractual bargain, interfere with a party’s reasonable expectations and prevent the party from safeguarding or reinstating his rights?

To this question, the Court responded no. And for several reasons. First, the Minnesota law is intended to reflect the intent of the policyholder. The state makes a sensible judgment about what that might be, and legislated to help the intent fall into place. So the Minnesota law actually supports the contractual bargain. Next, parties cannot have reasonable expectations that spousal designations will last after a divorce. Divorce courts always change things up with marital property after a divorce, so there’s no big surprise. Lastly, any party who wants to work around the automatic revocation can simply file a change-of-beneficiary form with the insurance company. The Court calls this a minimal paperwork burden that the state is justified in imposing.

So without reaching Step 2, the Court ruled for Sveen – Sveen’s kids, who opposed Melin in this action and will now reap the benefit.

And if you’re curious, Step 2 would have asked whether “the state law is drawn in an ‘appropriate’ and ‘reasonable’ way to advance “a significant and legitimate public purpose.'” 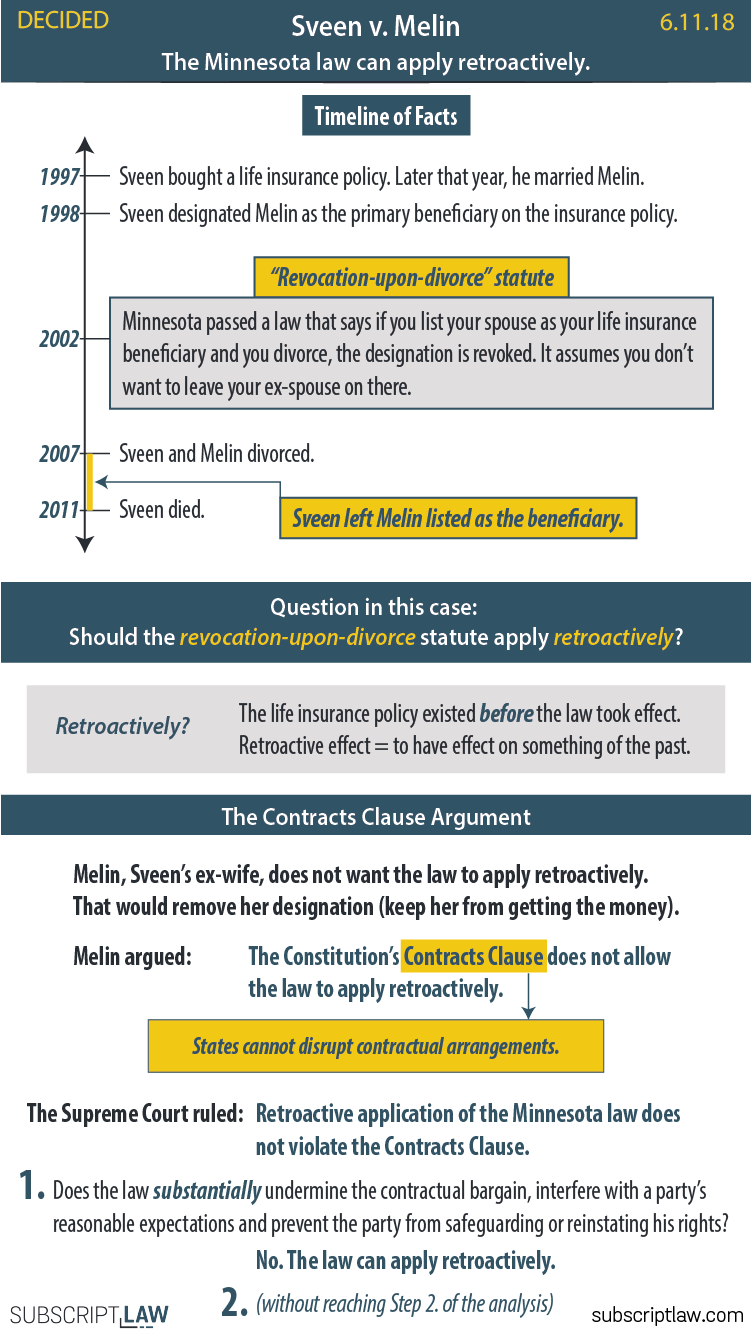