Can states pick up an annual $28 billion in sales taxes from online-retailers?

It’s no secret that online retail is where it’s at. Even better, a 1992 Supreme Court ruling says that a business doesn’t necessarily have to pay sales taxes to fulfill orders in a state. Only if the business has a physical presence in the state.

States have been fighting back, and now South Dakota has a chance to overturn the precedent in the Supreme Court.

The 1992 case is Quill v. North Dakota. North Dakota had tried to force Quill, a mail-order shop based outside of the state, to pay taxes for sales shipped into the state. The Supreme Court ruled that states cannot charge sales taxes to a “vendor whose only contacts with the taxing State are by mail or common carrier.”

Although the ruling was made in a different era, it would seem to apply to online retailers. But has the nature of the game changed so that the Supreme Court needs to reconsider the rule?

What are the Constitutional boundaries?

However, the Commerce Clause does not forbid taxes on any interstate sale. It only prohibits those taxes which would interfere with the federal government’s plans to regulate the national economy. That still sounds too abstract, and the Supreme Court has tried to narrow it down over time. In 1977, the Court came up with a four-factor analysis to determine whether the Commerce Clause is being violated by a state tax (Complete Auto Transit v. Brady). Those are the four factors that are listed in our infographic.

The fourth “substantial nexus” factor is where this case’s controversy lies.

Quill decided that having a substantial connection with a state at least must include having a physical presence there. The Court thought the clarity of the physical presence requirement outweighed its potential arbitrariness. The Court admitted that the rule “appears artificial at its edges” but said the artificiality “is more than offset by the benefits of a clear rule.”

Impact of the case

Will it affect my Amazon purchases? Actually, no. Amazon already has agreed to pay sales taxes in all of the states that charge it. After years of fighting states on the issue, it threw in the towel. Of course, that means the company passes the taxes on to customers.

Walmart and Target also comply with sales tax requirements for their online orders because they each have a “physical presence” in every state.

But what about the tons of other online retailers?

The companies that brought this case (Wayfair, Overstock and Newegg) do not have physical presences in every state. They and businesses like them generally only pay sales taxes in states in which they have a physical presence.

If the Court overrules Quill, or otherwise reformulates the substantial nexus requirement to include broader relationship between companies and states, consumers could pay slightly more for online purchases. And states will gain a significant amount of money to spend on general budget items like public schools, departments and programs. 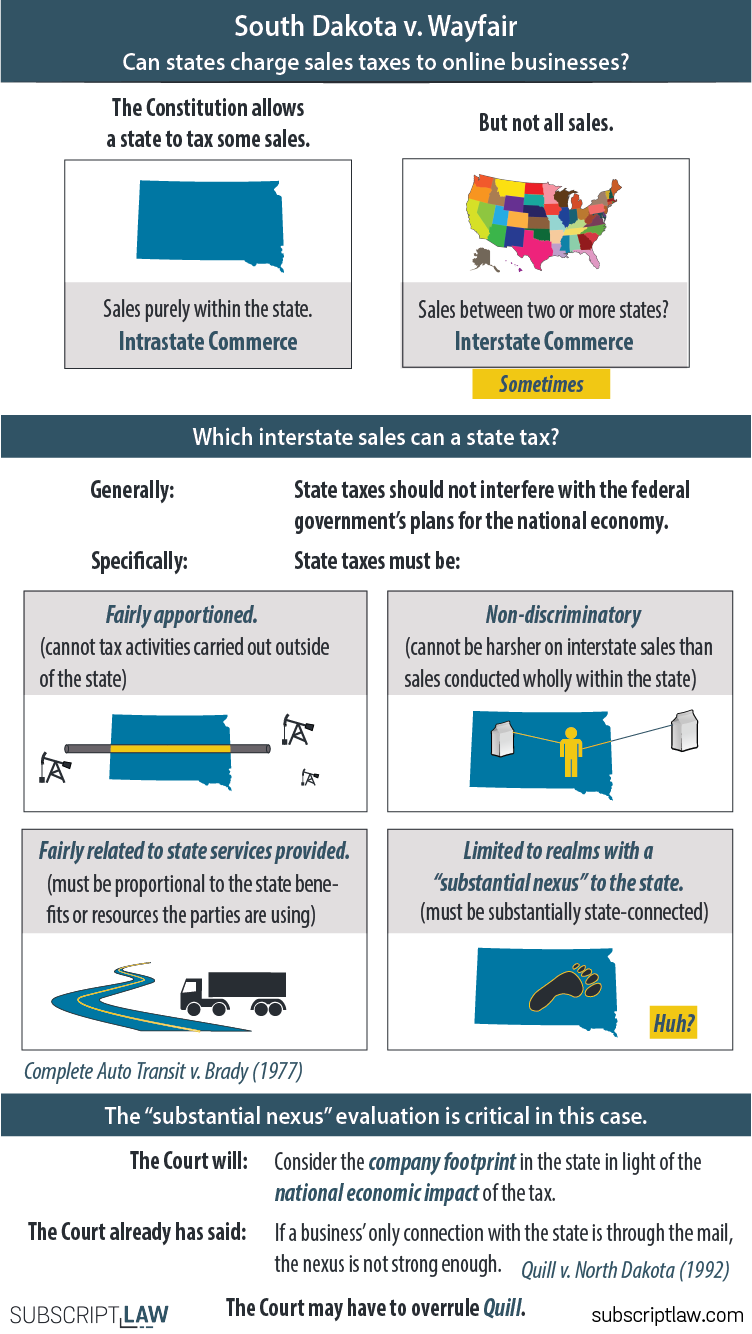