Significance of the Trump administration’s policy reversal on affirmative action

What is the significance of the Trump administration’s recent policy reversal on affirmative action?

Last week, the Trump administration reversed Obama-era guidelines on how public schools should use race in their admission policies. Under Obama, the federal government urged schools to use race as one among several factors to promote diversity in schools. Trump’s team reversed the policy, scrapping support for using race and encouraging schools to use only “race neutral” factors in their acceptance considerations.

Each side of the debate has its roots in the 14th Amendment. The “Equal Protection Clause” says states cannot deny any person the right to “equal protection of the laws.” This means states can’t discriminate in their policies (like admissions policies) on the basis of race, color, religion, or country of origin.

Historically, Equal Protection has been used to ensure African Americans and other minorities don’t face discrimination by state governments. For example, the Supreme Court used Equal Protection to rule that segregation in America’s public schools is illegal (Brown v. Board of Education). The federal government is bound by a different version of the same clause.

Recognizing that African Americans and other minorities historically faced discrimination in this country, certain state and federal policies not only protect against discrimination, but they seek to give a stronger push towards members of minority classes. These policies – Affirmative Action policies – go farther by actually promoting minorities against the rest of the population.

This is where the flip side of the Equal Protection clause comes into play.

Baake‘s “one among several factors” ruling

A policy promoting minorities can disadvantage other members of the general population. That’s what a white applicant to UC Davis’ medical school argued in a precedent-setting case (Regents of the Univ. of California v. Baake, 1978). UC Davis reserved 16 of its 100 spots in medical school for minority applicants. Allan Baake argued he had higher academic credentials (GPA and test scores) than any of the minority applicants admitted, and the policy was unfair. The Equal Protection Clause, Baake argued, says you can’t deny anyone equal protection of the laws, and that includes me – even though I’m not considered a minority.

The Supreme Court ruled for Baake. Specifically, UC Davis’ policy had a strict quota reserved for minority population members. The Court said strictly excluding other applicants from those spots violates Equal Protection. The Court did say, however, that a school could use race as one among several factors for admissions considerations.

The Baake “one among several factors” ruling is how schools have been shaping their affirmative action policies ever since. That’s the position also echoed by the Obama-era guidance recently overturned.

The Supreme Court stood by its Baake decision for years, despite several chances to overturn it. Most recently, the Supreme Court had a chance to review the University of Texas admissions policy which considered race as a factor (Fisher v. University of Texas, 2016). First, Texas – prescribed by its legislature – has a rule that all applicants who graduate high school in the top ten percent of their class are automatically accepted into the state universities. That rule is meant to promote diversity, but it is “race neutral.” It does not consider race directly. However by the nature of “natural” housing patterns and school geography in the state, it ends up with a large number of minority students admitted who may not have been admitted otherwise. The 10% policy actually takes up a huge percentage of enrollment (e.g. 81% of all freshmen spots were booked in 2008). That leaves others – including Abigail Fisher in 2008 – to fight for a small number of spots.

After the “Top 10% Policy” is when the consideration of race came into play. For the final spots, UT Austin would take some academic and personal factors into consideration. Race was among the personal factors the university considered. But race was not given a strict numerical value. It simply would factor into an analysis of whether an individual was a good student as a whole.

Although the Supreme Court evaluated UT’s policy through a harsh lens (strict scrutiny), the policy passed. The Court noted that the most impactful part of UT’s policy on the UT applicant who brought the suit, Fisher, was not the race factoring but the Top 10% Policy – the “race-neutral” part.

But what if there had been a more conservative court?

Guess which Justice sided with the liberals in favor of UT’s policy in Fisher? It was Justice Anthony Kennedy, the one who recently announced his retirement.

Trump now has the chance to appoint a more conservative Justice in Kennedy’s place. Considering Trump’s recent policy change in opposition to Affirmative Action, his selection of the incoming Justice certainly may change how the next Affirmative Action case will turn out.

And there is a next case already.

You might have guessed there are more than a few people disenchanted by Harvard’s admissions policies. But one group of Asian American applicants in particular is lining up the challenge which may be sympathetic to a new – more conservative – Supreme Court.

A number of Asian-American Harvard applicants joined together to sue as a group called Students For Fair Admissions (SFFA v. Harvard). They argue that Harvard’s admissions policy considers race too strongly, and the process treats Asian-Americans unfairly. The allegations against Harvard could be in some ways unique to Harvard, but on the other hand, the case may give the Justices a chance to consider the legitimacy of Affirmative Action policies as a whole.

The Trump administration already has filed a brief in the case in support of the Asian-American litigants. The government urged the court – during the pre-trial discovery period – to require Harvard to reveal certain admissions records that Harvard claims are “highly sensitive” and “highly proprietary.”

Significance of the Trump administration’s policy reversal on affirmative action 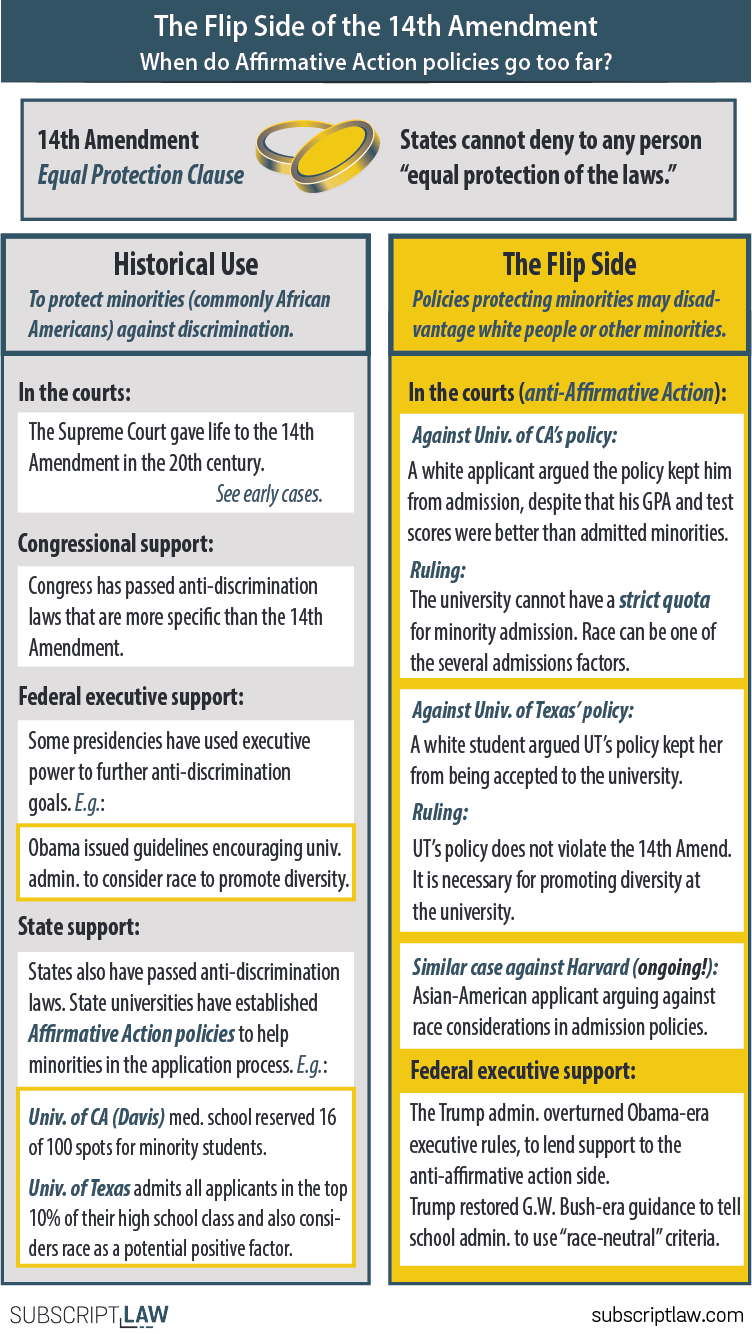