Segregation “generates a feeling of inferiority . . . in a way unlikely ever to be undone.”

Nearly 100 years after the 14th Amendment was passed, the nation came to recognize that racial segregation was an impediment to equality. The turn came with the Supreme Court’s ruling in 1954 in the now well-known case Brown v. Board of Education of Topeka.

Brown v. Board of Education was actually 4 different cases consolidated. The same issue had arisen in 4 different states: black applicants had been denied entrance to all-white schools and the lower courts had ruled segregation in public schools is acceptable, as long as the schools offering spots to black students were “equal” – that is, “equal” in all tangible factors.

In three of the cases, the lower courts had determined: yes, the alternative schools are equal. They are equal in their physical structures, in the curricula offered, and in the qualifications and salaries of the teachers. In the fourth case, the lower court determined the school admitting black students was not equal, so only in that case was the black applicant admitted to the all-white school. But that wasn’t the point. The point for these students was that state-imposed segregation should be illegal. The American Constitution provides that all men are equal under the law, so how can they be excluded from schools solely on the basis of their race?

Where “separate but equal” came from: Plessy v. Ferguson

“Separate but equal” came from an 1869 Supreme Court ruling, Plessy v. Ferguson. That case was about segregation in public transportation. Homer Adolph Plessy had been arrested for refusing to move from a “whites-only” rail car. At the time, Louisiana had a law supporting segregation of rail cars. When Plessy challenged the law under the 14th Amendment, the Supreme Court ruled that “separate but equal” was still equal. It did not violate the 14th Amendment.

So that’s the law the lower courts had been following in each of the cases underlying Brown v. Board of Education. In each of the cases, the respective state had a law either supporting or mandating segregation. Now, it was finally time to reevaluate that ruling.

Society was becoming slightly less racist by the 1950s as African Americans began achieving economic and educational success. As it became feasible for people to see the inherent equality in the races, people (like the Justices) were able to recognize what it could mean to give everyone a fair shot at education.

Of course, the Court didn’t say this outright, but this is what it said (paraphrased in most part):

When the 14th Amendment was passed, public education didn’t exist. Education in the white community was private, and there was nearly no chance for education in the black community. “In fact, any education of Negroes was forbidden by law in some states.” It wouldn’t be for years that the public education system as it exists today [in 1954] — supported by general taxes and available – even compulsory – to all — would become essential to a person’s opportunity to live a successful life. By 1954, education had become “a principal instrument in awakening the child to cultural values, in preparing him for later professional training, and in helping him to adjust normally to his environment.”

The Court needed to figure out what was intended at the time the 14th Amendment was passed, so it recounted this revolution in public education to justify why it’s possible that for so many years there could have been confusion about what “equal protection” means. The Court was preparing to say that “equal protection” always intended for shared facilities among all races, but there hadn’t been precedent for it because the system had been so different.

Fast-forward though, and the Court in 1954 was able to acknowledge that “many Negroes have achieved outstanding success in the arts and sciences, as well as in the business and professional world.” So, where the 14th Amendment always intended for “equal protection,” which meant zero government-imposed discrimination (Slaughter-House Cases, 1873), society just hadn’t noticed what it meant to give African Americans a real (equal) chance.

In 1954, it finally was clear that a real chance meant opening up all the public educational institutions to all races equally.

In evaluating equality, the Supreme Court finally took into account “intangible” factors. So, instead of stopping the analysis at the tangible factors like buildings, curricula, and teacher qualifications, the Court said the following considerations also mattered: “[a student’s] ability to study, to engage in discussions and exchange views with other students, and, in general, to learn his profession.”

The opportunity to access all institutions regardless of race was essential to a student’s fair shot at education.

The Court said, “To separate [students] from others of similar age and qualifications solely because of their race generates a feeling of inferiority as to their status in the community that may affect their hearts and minds in a way unlikely ever to be undone.” Continuing, the Court incorporated a passage in full from the lower court in Kansas, which had – despite feeling compelled to rule against the black applicants because of Plessy – noted the psychological harm possible from segregation:

“Segregation of white and colored children in public schools has a detrimental effect upon the colored children. The impact is greater when it has the sanction of the law, for the policy of separating the races is usually interpreted as denoting the inferiority of the negro group. A sense of inferiority affects the motivation of a child to learn. Segregation with the sanction of law, therefore, has a tendency to [retard] the educational and mental development of negro children and to deprive them of some of the benefits they would receive in a racial[ly] integrated school system.”

And then the magic words: “Any language in Plessy v. Ferguson contrary to this finding is rejected. We conclude that, in the field of public education, the doctrine of “separate but equal” has no place. Separate educational facilities are inherently unequal.”

The Supreme Court ruling ordered immediate desegregation of public schools, but we all know the fight for equality was not over. States resisted desegregation with various legal measures to avoid effectuating Brown’s ruling. And racial violence erupted, along with membership to the Ku Klux Klan. Racial minority groups also equipped themselves in opposition. Here is an account of the years following Brown in North Carolina, for example. The Library of Congress outlines many accounts of issues following the ruling, including the 1955 arrest of Rosa Parks in Montgomery, Alabama (refusing to give up her seat on a bus to a white passenger), threats and violence against black students admitted to previously all-white schools, resistance from political leaders, and more violence. The federal government often was called upon to protect students in exercising their right to attend previously all-white institutions. In Alabama, the Governor even brought out his State Troops to block off the doors of the University of Alabama, finally standing down to the federal National Guard, sent to assist in the integration process.

Although the Supreme Court mandated public school desegregation in 1954, public schools today still are racially segregated in large part. Housing patterns – natural in part but perpetuated by racist policies following Brown – have been a major contributor. Here is an audio discussion on NPR describing how government policies after Brown contributed to the segregated housing we see today.

The Fair Housing Act, which was passed in 1968, has been used to challenge discriminatory housing practices, from development and zoning to rentals and sales. The Act forbids both government actors as well as private parties from discriminating. There are still a large number of lawsuits today alleging (and proving) discrimination under the Fair Housing Act, which combats even indirect (well-hidden) racism by looking at the effects of the allegedly discriminatory policies. 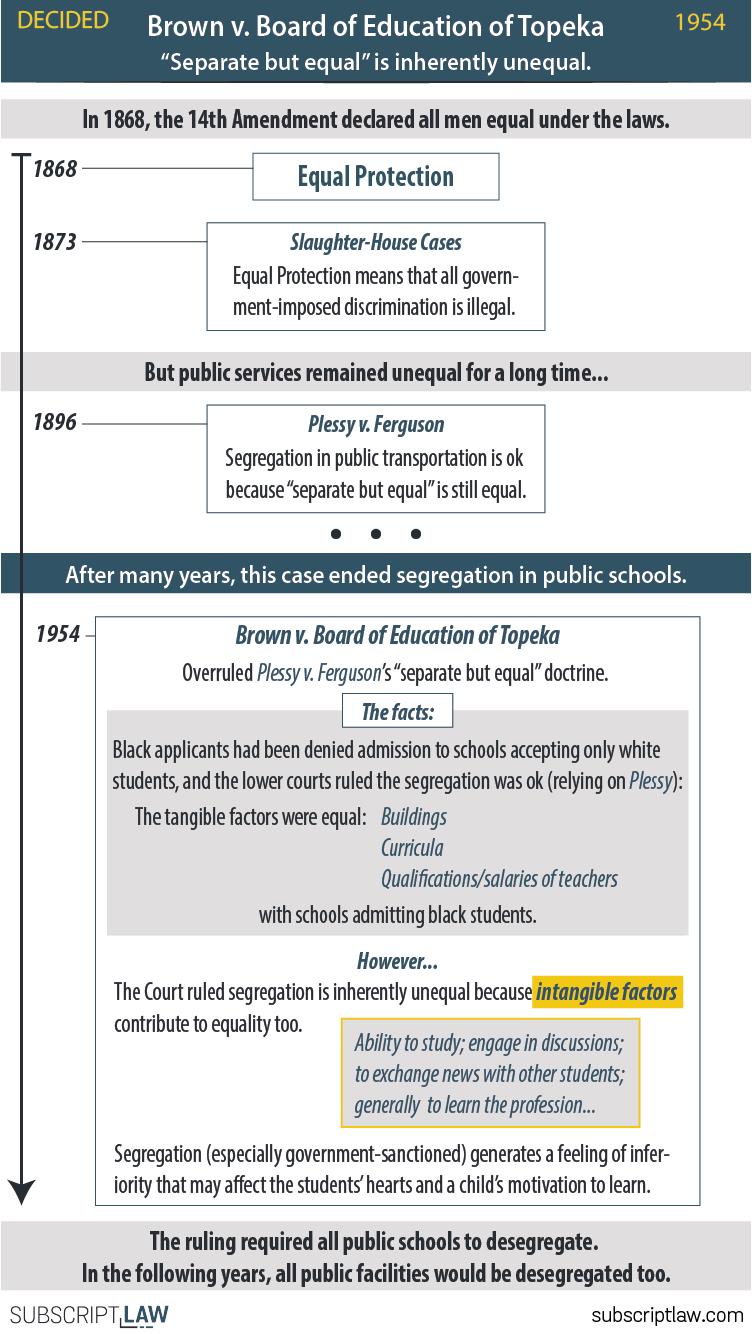