It’s no secret that merchants pay credit card companies a fee. Merchants accept credit cards because paying with credit is easy on the consumer.

American Express makes a large portion of its money off of this fee. Visa and MasterCard – which profit mainly from consumer debt payments – charge lower merchant fees than Amex.

That’s why Amex builds self-protection into its contracts with merchants. If a merchant accepts American Express, it agrees that it will not steer consumers into using the other cards.

Many years ago, the government decided that anti-competitive conduct is not good for consumers. Monopolies and other restraints on trade drive up consumer prices, and without regulation, the companies would take advantage.

The Sherman Antitrust Act was passed in 1890, banning contracts and conspiracies that restrain trade. The Supreme Court recognized the power of the Sherman Act (the federal government’s right to regulate monopolies) in 1911 when it ordered the break-up of the Rockefeller Standard Oil conglomerate.

The lawsuit against Amex by state attorneys general

Ohio and several other states sued Amex arguing the Sherman Antitrust Act bans the contract between Amex and the merchants because the contract is anti-competitive.

To prove a violation of the Sherman Act, the states must prove the contract produces anticompetitive effects in the market.

Question to the Supreme Court

The issue before the Supreme Court was how the Sherman Act would define the “market” in this case.

The Supreme Court affirmed the appeals court (Second Circuit) that the market for antitrust analysis must include the cardholders. The Sherman Act will not bar a contract that produces anticompetitive effects for the merchants only. Plus, the court cannot infer negative effects on cardholders by using general economic theory. Specific evidence presented in the case would have to show it.

Because Ohio et al. had not shown that Amex’s contract produces negative (anticompetitive) effects on the cardholders, the contract does not violate the Sherman Act. 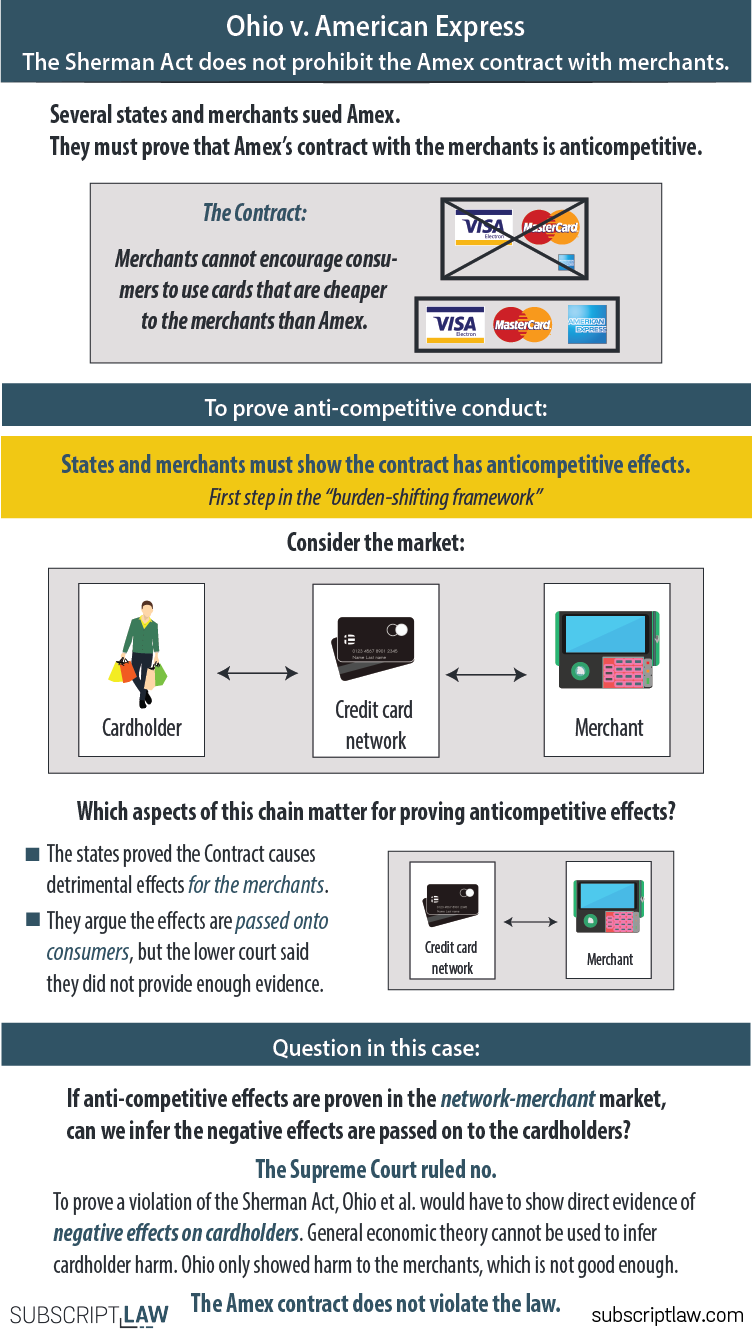