Not all Supreme Court cases make the big league news. You can tell that to the other three decisions that came out today. This one, however, had the eyes of many.

The Masterpiece Cakeshop case brought a major civil rights question to the Supreme Court. It presented a conflict between religious freedom and LGBT rights. Does a religious cake shop owner have the right to refuse creating a same-sex wedding cake because he does not agree with gay marriage?

The Supreme Court could have decided whether the Colorado law binding the cake shop was unconstitutional. Does a state have the authority to craft a law that may have the effect of controlling a cake artist’s expression like that? The question would have required a direct face-off between the two important principles.

But the Court didn’t tackle the big question. The Supreme Court ruled for the cake shop owner in a more limited way. The Court refrained from judging the Colorado law generally and instead rejected how Colorado adjudicated this specific case. The effect? Colorado will get another chance at reviewing the dispute. It’s only a temporary win for Masterpiece Cakeshop.

Charlie Craig and David Mullins walked into the Masterpiece Cakeshop seeking a custom cake to commemorate their (same-sex) wedding. The cake shop owner, Jack Phillips, refused. Phillips said same-sex marriage goes against his religious beliefs, and he would not create a custom cake to serve the couple.

Colorado has a law preventing a store owner from discriminating in the store’s sales on the basis of sexual orientation. Craig and Mullins filed a complaint against Phillips and the cake shop, citing CO’s anti-discrimination law.

The conflict between free speech/exercise and LGBT rights

The big issue between these parties is not trivial. It presents a conflict between two very important principles.

One principle is that gay people and gay couples should not be discriminated against. The laws – federal, state, and even the Constitution – can protect them in exercise of their civil rights.

The other principle is the all-important First Amendment, which protects people’s expression. The First Amendment can protect someone’s “religious and philosophical objections to gay marriage.”

The conflict is easy enough to see. The gay couple demands equal access to custom wedding cakes, and the cake shop owner demands to be free from expressing support for gay marriage.

However, the Supreme Court found – without getting into all that – that Colorado violated the First Amendment. The Court’s 7-member majority ruled that the Colorado Civil Rights Commission discriminated against Phillips’ religious rights during the adjudication. The Court said the Commission treated Phillips’ religious views and argument with hostility. The Court pointed out that the Commission “disparaged Phillips’ faith as despicable and characterized it as merely rhetorical, and compared his invocation of his sincerely held religious beliefs to defenses of slavery and the Holocaust.”

Thus, the Court said, we don’t need to look at the validity of the general law (at least not today). We can look more specifically at the Colorado adjudication to end the case. The Court did not, then, consider the strength of the First Amendment versus LGBT rights. It merely sent the case back to Colorado to adjudicate it fairly. That leaves room for Colorado to make the same ruling against the cake shop, but this time the CO Commission will have to be careful that it does not disrespect Phillips’ religious arguments.

Ginsburg (with Sotomayor) would have tackled the big question and ruled to support the Colorado law. Ginsburg said that the record did not evidence hostility on the part of the Colorado Commission that should have overshadowed the plain issue: that the cake shop owner was discriminating against the gay couple on the basis of their sexual orientation. The Colorado anti-discrimination law is sensible, generally applicable, and does not violate the First Amendment. The cake shop owner should not get out of his obligation to refrain from discriminating. 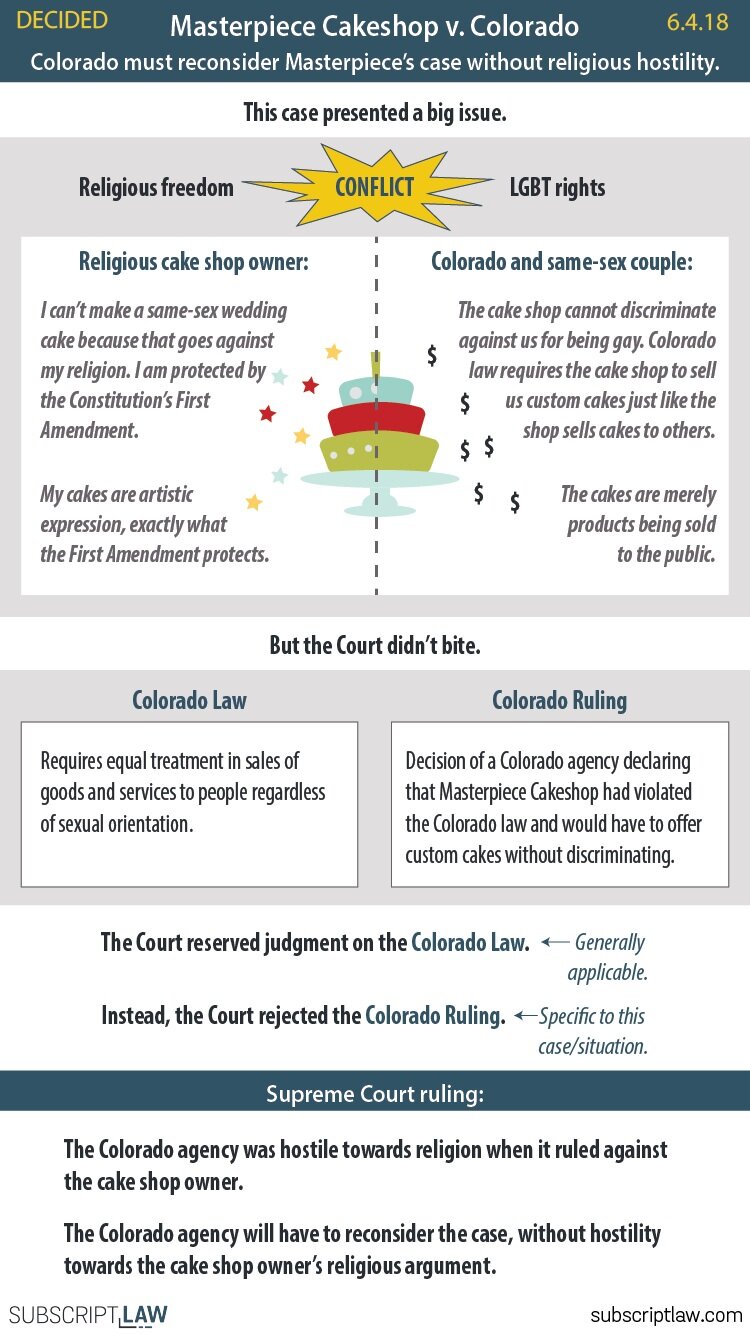