This case has been decided. See how it turned out!
View infographic

This case is about a judge in the executive branch – a judge in the Securities and Exchange Commission. Does the judge have enough authority that he should have been appointed in a specific way?

“Officers” are those with significant authority

Certain officials in the executive branch must be appointed in the way the Constitution specifies. They are called “Officers”; they are people with  “significant authority.”

In this case, the Court will determine whether the SEC judge had enough authority that he should have been appointed formally.

First, what happened to Lucia?

In this case, the SEC decided to investigate Lucia under the Investment Advisors Act. The agency was concerned that Lucia and his investment advisory company were advertising a misleading investment strategy (called “Buckets of Money,” of course). The administrative judge determined Lucia had violated the law by presenting misleading figures about how the strategy would have performed. The Commission (the judge’s higher-ups) requested the judge to get more information because it determined the case to be of particular importance. In the end, the judge ruled that Lucia should be disbarred from investment advising for life.

Lucia then asked for review by the Commission (the higher-ups), and he lost. The Commission backed the judge.

Now, Lucia – to the real judicial federal courts – argues the SEC judge was exercising too much authority for someone who was not formally appointed. That would throw out the SEC judge’s ruling against Lucia.

Federal government workers are divided into a couple of classes of importance: the very important and the less-important. The very important people are Officers. They include, for example, the President’s cabinet members, who must be appointed by the President with advice and consent of the Senate.

Also within that very important category are the “inferior Officers.” These are people below the Cabinet Members but who also exercise “significant authority pursuant to the laws of the United States,” (Buckley v. Valeo, 1976).

More on what makes an Officer?

Unfortunately, we don’t have much more than the vague statement the Supreme Court made in 1976: inferior Officers are those who exercise “significant authority pursuant to the laws of the United States,” (Buckley v. Valeo, 1976).

To give the phrase more meaning, we can make a comparison with other cases in which the Court has ruled people to be Officers. We’ve made the comparison with two other Supreme Court rulings in the infographic.

The tax court judges in Freytag sound like they have a similar level of responsibility as the SEC judges in this case. So the argument on the SEC’s side will have to distinguish the SEC judges from the tax court judges in Freytag. The ruling will probably come down to oversight: to what extent are the SEC judges able to exercise authority on their own, versus with the permission of higher-ups? The party arguing for the SEC says: if the judge can’t bind the agency with the judge’s own name (i.e. sign the order alone), then the judge is not an Officer and Lucia will have to face the consequences.

Turns out, the SEC is not arguing against Lucia in this case. In a not-so-common move, the SEC decided that it agrees with Lucia, so it filed a brief also arguing that the SEC judge should have been formally appointed. Because the SEC would no longer be arguing its side of the case, the Supreme Court appointed someone else to do it. Anton Metlitsky is the chosen one. He filed the brief on that side of the argument and will be arguing the SEC’s position before the Court. 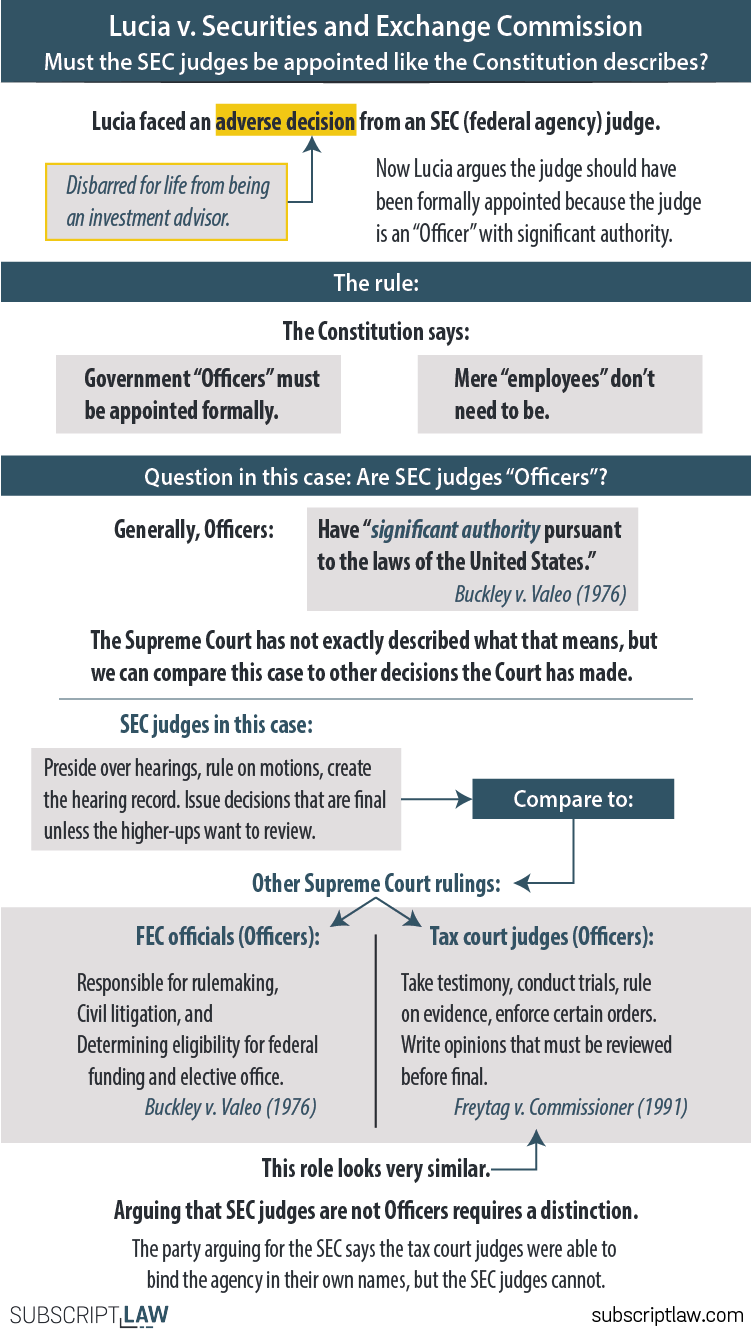