In Lucia v. SEC, the Court took Constitutional issue with the way the agency’s administrative judges are appointed. The ruling ordered a change which may have consequences across all federal agencies.

The Constitution specifies that certain roles within agencies must be appointed formally. This case asked if the SEC judicial roles are significant enough to require formal appointment.

The case started with an SEC investigation against Lucia. The agency was concerned that Lucia and his investment advisory company were advertising a misleading investment strategy (called “Buckets of Money,” naturally). The administrative judge determined Lucia had violated the law by presenting misleading figures about how the strategy would have performed.

The decision disbarred Lucia for life from being an investment advisor. Lucia in turn brought this dispute complaining that the judge hadn’t been appointed correctly.

Question before the Court

The Supreme Court was asked to determine if the judge – and other SEC judges with the same role – were appointed in the manner the Constitution demands.

So are they “Officers”?

The Constitution itself does not specifically state which agency roles fall into the “Officer” characterization. But the Supreme Court has extrapolated. An Officer is an agency official who exercises “significant authority pursuant to the laws of the United States,” (Buckley v. Valeo, 1976).

The Supreme Court ruled that the SEC judges have roles very similar to the roles of the tax court judges in Freytag. The SEC judges even have slightly more authority. Our infographic outlines the comparison.

So what does that mean for Lucia? Lucia will get a chance to have his case heard by someone who was properly appointed. It turns out, the SEC already has gone through a formal appointment process for its judges (the SEC jumped ship on its own side of the argument and agreed with Lucia already). However, the Court specified that Lucia will have to get a hearing from a judge other than the one who already decided his case.

This case could have far-reaching consequences because the decision did not limit the ruling to SEC judges. It could affect administrative judges in other agencies, like the Social Security Administration. Even limiting to the SSA, there are a lot. Certainly, the ruling leaves the door open for additional lawsuits to challenge the appointments of other agencys’ judges. 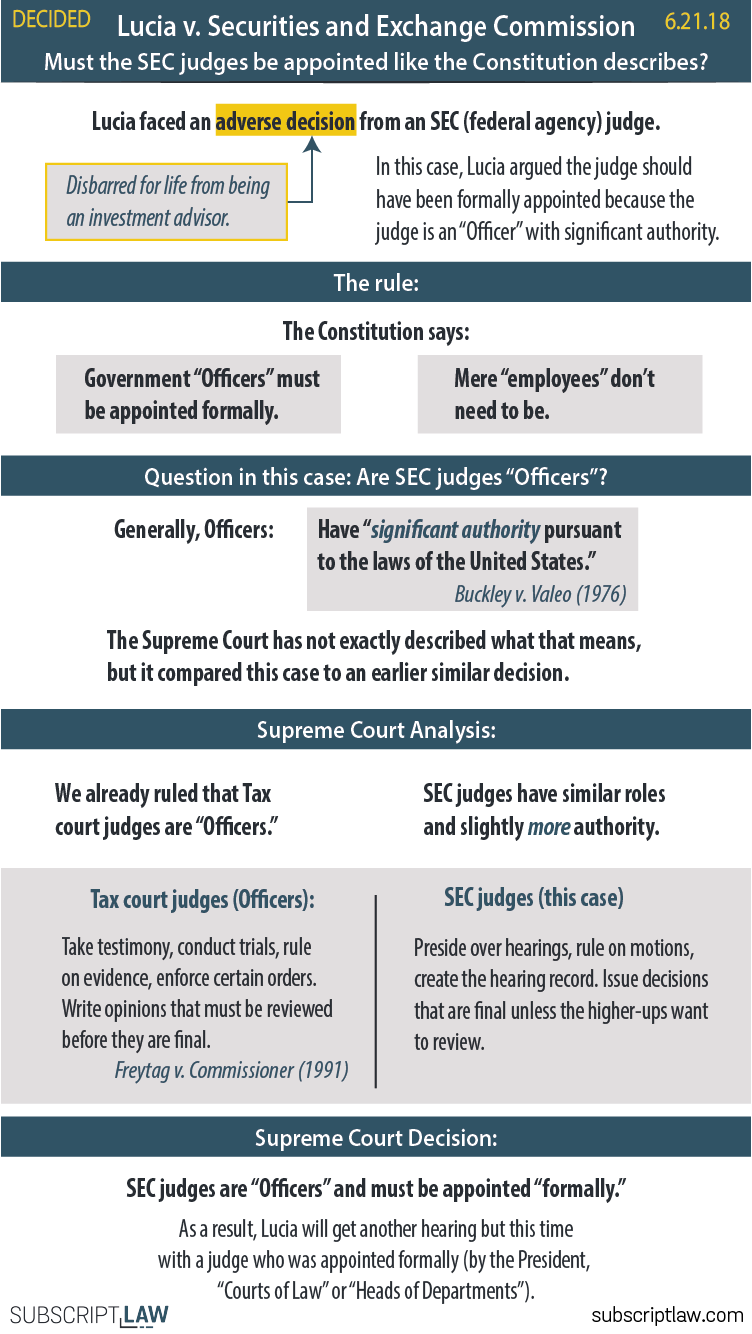