Foreign terrorist attack victims will not be able to use the U.S. courts to get money damages from the Jordanian bank.

Both parties in this case are foreign. Jesner and the rest of the plaintiffs (from Israel) sued Arab Bank (of Jordan) claiming that the bank facilitated certain terrorist attacks in Israel, the West Bank and Gaza. The plaintiffs filed a suit in U.S. federal court under the Alien Tort Statute to recover monetary damages resulting from the attacks.

Why were the Plaintiffs using U.S. courts? Because of the Alien Tort Statute.

And – the more particular question of this case – does the Alien Tort Statute work against a foreign corporation?

First, to explain the statute generally…

The Alien Tort Statute was established in 1789. A couple altercations had arisen to illustrate that Congress might want to address whether foreigners could use U.S. courts to sue for damages. For example, a French adventurer had assaulted a French diplomat in Philadelphia. The dispute seemed sufficiently connected to the U.S. that U.S. courts should be able to get involved.

There are a few important limitations here. One, jurisdiction under the ATS is only for civil actions (monetary damages). Two, the foreigner must allege that the defendant has broken an international norm. And three, the dispute must “touch and concern” the U.S. (Kiobel v. Royal Dutch Petroleum Co. (2013).

From the 18th Century to today

At the time the ATS was passed, international norms spoke about things like piracy on the seas, slave trading, and diplomatic rights. They didn’t include some of the more modern norms of international law, like the one alleged in this case: facilitation of financial support to terrorist activity.

After the ATS was passed, it wasn’t used much. Not until the 20th Century, when international law became more recognized (think WWII and crimes against humanity). By the time cases started appearing in the courts under the ATS, it had been so long, that the courts had to figure out what types of cases the law actually allowed into courts.

This case gave the Court an opportunity to declare a limit to the Alien Tort Statute’s jurisdictional grant. The question was: does the statute allow plaintiffs to pull foreign corporations into court?

The Court said no.

The Alien Tort Statute, it reminds us, is only meant to provide a right to get into court for violations of international norms recognized at the time the ATS was passed. And the statute was meant to resolve potential issues of diplomacy, not to cause more complications. Bringing foreign corporations into it changes the entire nature of what was intended.

For one, what was meant to be a right to use U.S. courts for things uniquely connected to the U.S. would – with the inclusion of foreign corporate liability – “ha[ve] the potential to involve groups of foreign plaintiffs suing foreign corporations in the United States for alleged human-rights violations in other nations.” Furthermore, the international norms the statute intended were a mere modest set. The types of actions that the U.S. could get itself into redressing in relation to multinational corporations is vast.

When it comes down to it, the Court said, it’s not the judicial branch’s role to extend the ATS to suits against foreign corporations. It would be Congress’ role to consider all of those implications, if Congress so desired. 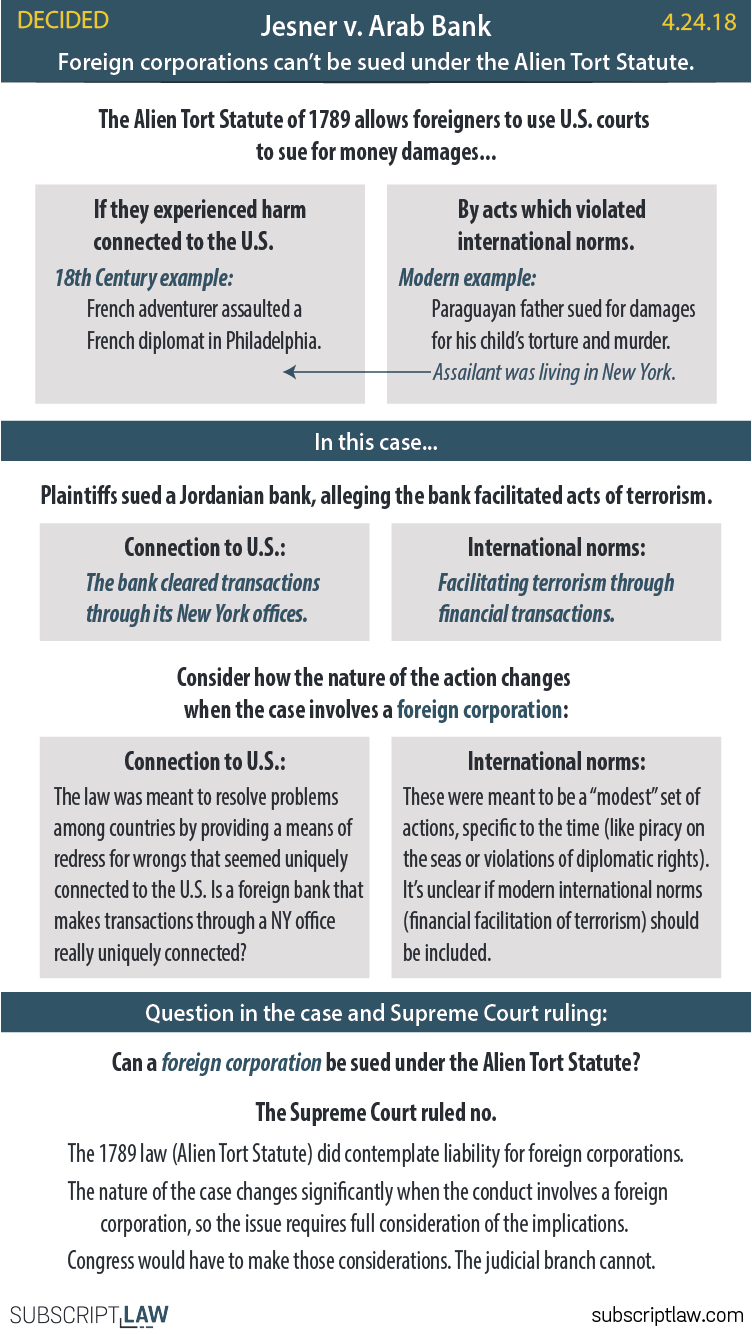