Ohio, like other states, is responsible for maintaining its voter rolls (including the rolls for federal elections). Federal law sets boundaries on the processes the states can use, and one of those limits is at issue here.

Limit on removal of voters

Years back, states – in efforts to keep their voting lists current – would review the lists of inactive voters (people who hadn’t voted in a while) and remove them. Congress decided that was unfair – harming people who should still be entitled to vote – and told states they couldn’t do that anymore. That rule is in the National Voter Registration Act. The NVRA also says that states should make efforts to remove people off of their voting rolls if they’ve moved out of the relevant voting district.

Turns out, these two requirements came into conflict.

Ohio’s process for removing people who have moved

Ohio set up a process to remove people who had moved from the voting rolls. Ohio’s process starts by reviewing which voters have not voted in a while. Then it sends those people letters and asks if they’ve moved. If someone both fails to respond to that letter AND again fails to vote in a couple of elections, then Ohio will remove that person, assuming the person has moved.

Two advocacy groups (including A. Philip Randolph Institute) and an Ohio resident challenged the Ohio process. They said the process is triggered by exactly the thing that the federal law says it can’t be triggered by: a voter’s failure to vote. The challengers say the state will have to find another way to remove people who have moved because this route is barred by the NVRA.

But – Ohio (Husted) says: We are actually following a process that is outlined in the NVRA itself.

And that would be true. The NVRA does describe a process as acceptable that looks very much like Ohio’s process. The only thing it’s not quite clear on is the interaction between that provision and the “can’t remove by failure to vote” provision (i.e. whether using the failure to vote as a trigger for the process is acceptable).

The Supreme Court, with a majority of the 5 conservative-leaning justices, put an end to the dispute. The Court ruled that Ohio’s process is acceptable. The “can’t remove by failure to vote” provision is not supposed to “cannibalize” the provision that outlines the acceptable process.

Justice Breyer wrote the dissent supported by the liberal wing. He provides a complicated statutory analysis to conclude that the “can’t remove people for not voting” provision does in fact prevail over the other relevant provisions. The dissent is concerned with outlawing state voting registration practices that “keep certain groups of citizens from voting” and “discourage participation,” which Breyer says the NVRA does in banning the challenged practice here. 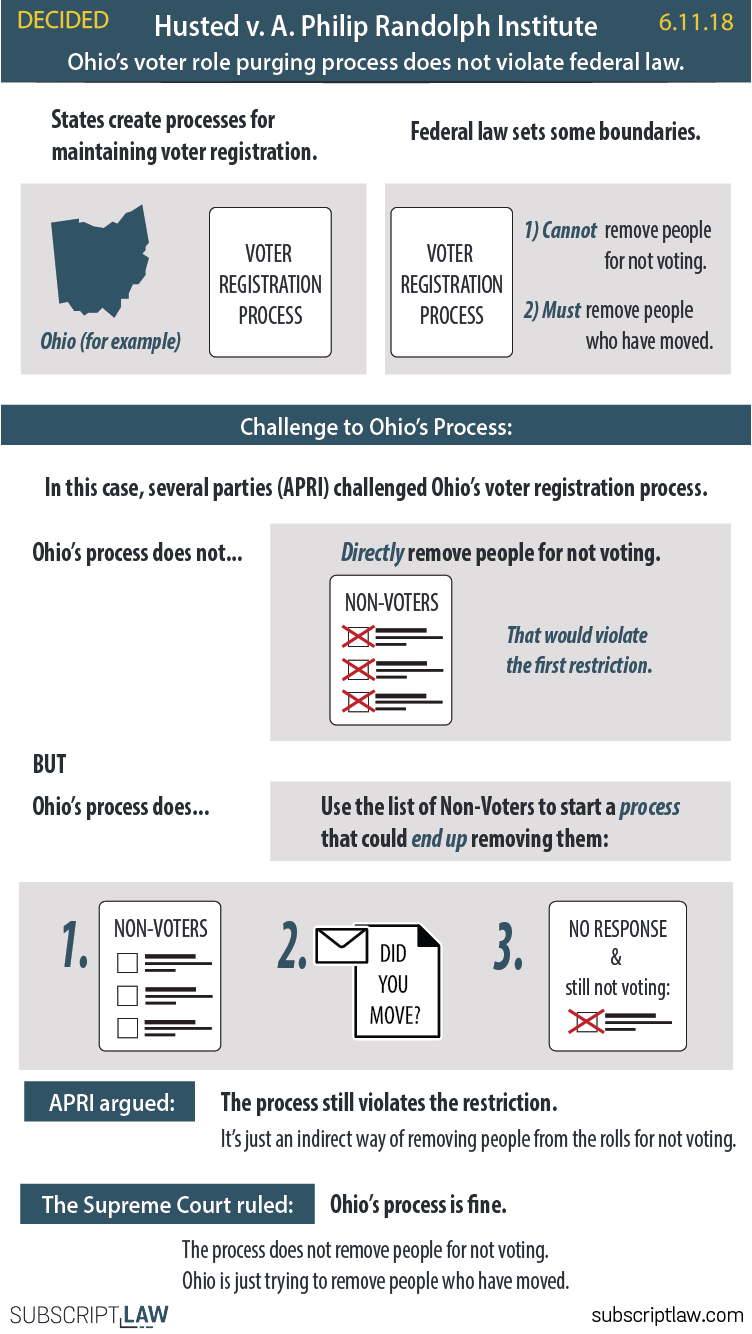