The Supreme Court has a chance to clear up confusion it started in 1977.

To the Petitioner, Erik Hughes, this case is about whether he can get a reduced sentence. But people who follow the Supreme Court may care more about how the Court decides it.

Now for the issue that court-followers are interested in:

What is the precedential value of a split decision? Let’s break down how the Justices sided in Freeman to highlight how it can be confusing.

4 Justices supported the plurality opinion. Kennedy wrote the opinion (joined by Ginsburg, Breyer and Kagan). The Plurality said a sentence in a plea deal always accounts for the Sentencing Guidelines. So plea deal sentences always can qualify for the reduction rule.

1 Justice (Sotomayor) wrote a concurrence. That means she agreed with the Plurality as to who won the case (here, she ruled for Freeman too), but she did not entirely agree with the Plurality’s reasoning. Sotomayor said she believes the plea sentence is always “based on” the plea deal itself, and generally not on the Sentencing Guidelines. However, she said, in certain situations, the plea deal makes clear that the Guidelines were used, like in Freeman’s case. So, she agreed that in Freeman’s case the sentence was “based on” the sentencing guidelines, so he qualified for the reduction rule. But the plea deal must actually reference the Guidelines.

4 Justices supported the dissenting opinion. Justice Roberts wrote it (joined by Scalia, Thomas and Alito). The Dissent said the sentence in a plea deal is always “based on” the plea deal itself, and never on the Guidelines, not even in the circumstance Sotomayor outlined. The Dissent would reject all attempts to qualify for sentence reductions by people who were sentenced based on plea deals.

Four Justices isn’t good enough to make precedent. So what are lower courts supposed to do when there are only four in agreement?

In 1977 in Marks v. United States, the Supreme Court articulated how we can extract value from a split decision. It said:

“When a fragmented Court decides a case and no single rationale explaining the result enjoys the assent of five Justices, the holding of the Court may be viewed as that position taken by those Members who concurred in the judgments on the narrowest grounds.”

The quote has caused confusion. Lower courts and individual judges have disagreed about what it means.

One option: find where five Justices can agree

One way to interpret the Marks rule is to look at the opinions that agree in the result (“concurred in the judgment”) and find at least some narrow rule that they can agree on. Looking at Freeman, that means to round up both the Plurality and Sotomayor’s Concurrence and find the common grounds.

That seems logical, but it will not help in Hughes’ case in which the plea deal does not specifically mention the Guidelines.

The interpretation of Marks that the lower court in this case has taken (and which is held by the majority of the other appeals courts in the nation, surprisingly) is one that neglects to make five Justices in agreement. The lower court here decided that Marks says to simply find a narrow rule that supports the result in the case. So in Freeman, of the 2 opinions that we poll (Plurality and Sotomayor Concurrence), the Plurality’s rule was broader, and Sotomayor’s rule was narrower. Ta-da, found it. This interpretation does not care that the rest of the 8 Justices did not agree with Sotomayor’s logic.

Perhaps the Court will clarify

The Supreme Court has the chance to clarify the Marks rule in this case. Let’s hope they do away with the version that doesn’t care about 5 Justices agreeing.

And as for Hughes? If the Court goes with the “Find-5” rule, then he will have a temporary win. The 11th Circuit will have been incorrect in allowing Sotomayor’s opinion to control. That does not mean Hughes will be entitled to the sentence revision. Rather, it means that either the Supreme Court will create a new aligned majority opinion about the “based on” issue, or the Supreme Court will tell the 11th Circuit to make its own judgment (without any precedent in control). The Court could also agree that “Forget-5” is right, in which case Hughes will be stuck with his sentence of 180 months.

And is there a wildcard option? Of course there is. The Court could make up a new path to interpreting a split decision. 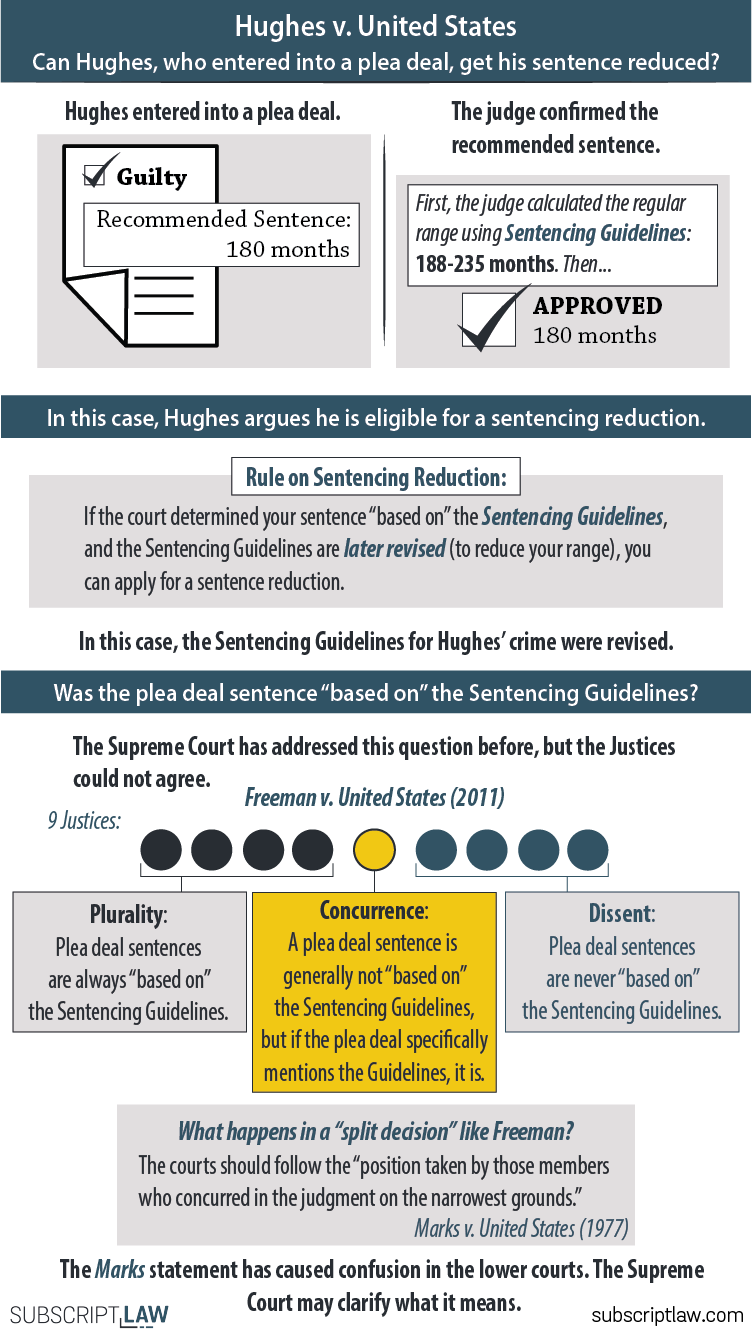