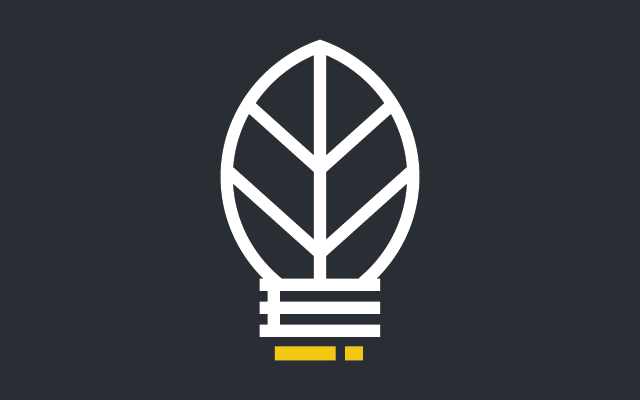 With Kennedy gone, the Court may align with the views of Scalia and Kavanaugh on the issue of climate change regulation.

Kavanaugh believes climate change is a real issue, but he is not convinced the EPA is supposed to be acting on it. Not without legislation from Congress specifically giving the agency power to regulate greenhouse gases. As we reported in our Introduction to the Kavanaugh Series, agency power is a complicated issue.

This report takes you through two Supreme Court cases relating to the EPA’s power to regulate emissions of greenhouse gases which contribute to climate change.

The first and critically important case, Massachusetts v. EPA, said the 1970 Clean Air Act uses a very broad definition of “air pollutants,” a definition which should adapt to changing evidence. That meant the EPA has the authority to regulate greenhouse gas emissions, and in fact, if the EPA decides greenhouse gases may endanger public health, the agency must take action to control the emissions.

The next case, UARG v. EPA, limited the EPA’s attempt to modify the Clean Air Act even further. As the EPA started regulating, the agency sought to adapt an additional aspect of the Act’s policies to greenhouse gases (a permitting scheme), but in this situation, the Court said the agency had overstepped its boundaries.

Kavanaugh would have limited the EPA’s authority in both cases. If he had been on the Court instead of Kennedy in 2007, the EPA might still be waiting on a Congressional act to take action to control greenhouse gases emissions.

In 1999, the EPA under George W. Bush faced a petition from a group of private organizations to address climate change. The petition expressed concern with greenhouse gas emissions from new motor vehicles and requested the EPA to do something about it. It called upon the EPA’s authority under the Clean Air Act to regulate to control air pollutants. 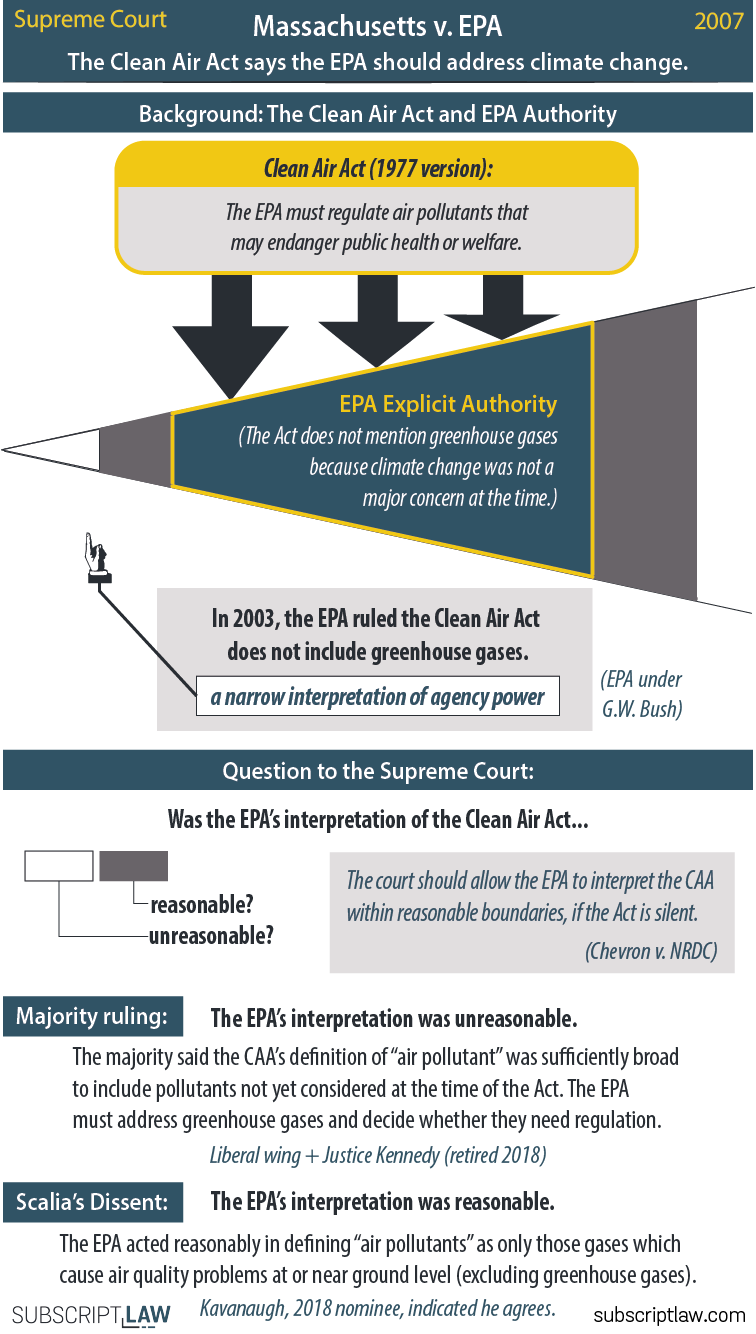 Kennedy sides with the liberal wing for an environmental win

The Supreme Court concluded that the EPA does have the authority to address greenhouse gas emissions. In fact, the Court ruled, if the agency finds that greenhouse gases endanger public health, the agency must regulate to control emissions.

Kennedy sided with the liberal wing of the Court on the issue. Here is the opinion by Justice Stevens.

Kavanaugh would have agreed with Scalia’s dissent

Scalia dissented, arguing several reasons in which the EPA acted reasonably in deciding not to regulate. Federal agencies are allowed to make reasonable interpretations of the statutes they administer (Chevron Deference), and the EPA certainly had acted reasonably. It was not at all clear that the statute covered greenhouse gases, he wrote. And the agency had explained itself very well. When it came to interpreting “air pollutant,” Scalia went to the dictionary, looked at definition of “pollution” and concluded the EPA’s interpretation of air pollutants as gases at or near ground level (not “higher up in the atmosphere”) was entirely reasonable.

Kavanaugh has indicated he would have sided with Scalia. In 2017, Kavanaugh wrote that federal agencies should not be expanding their authority to include major regulatory issues that Congress has not expressly delegated to them:

Thus, Kavanaugh appears to take issue with Chevron Deference, as far as it applies to major regulatory issues.

Shortly after Massachusetts v. EPA was decided in 2007, Obama took office and was happy to lead the EPA in regulating greenhouse gas emissions. But there would be a few more problems as the agency tried to adapt the Clean Air Act to greenhouse gases.

Once the EPA declared that greenhouse gases were a problem, the EPA started regulating emissions from motor vehicles. The “Tailpipe Rule” faced its own issues, but it was a different issue that was brought to the Supreme Court in Utility Air Regulatory Group v. EPA. 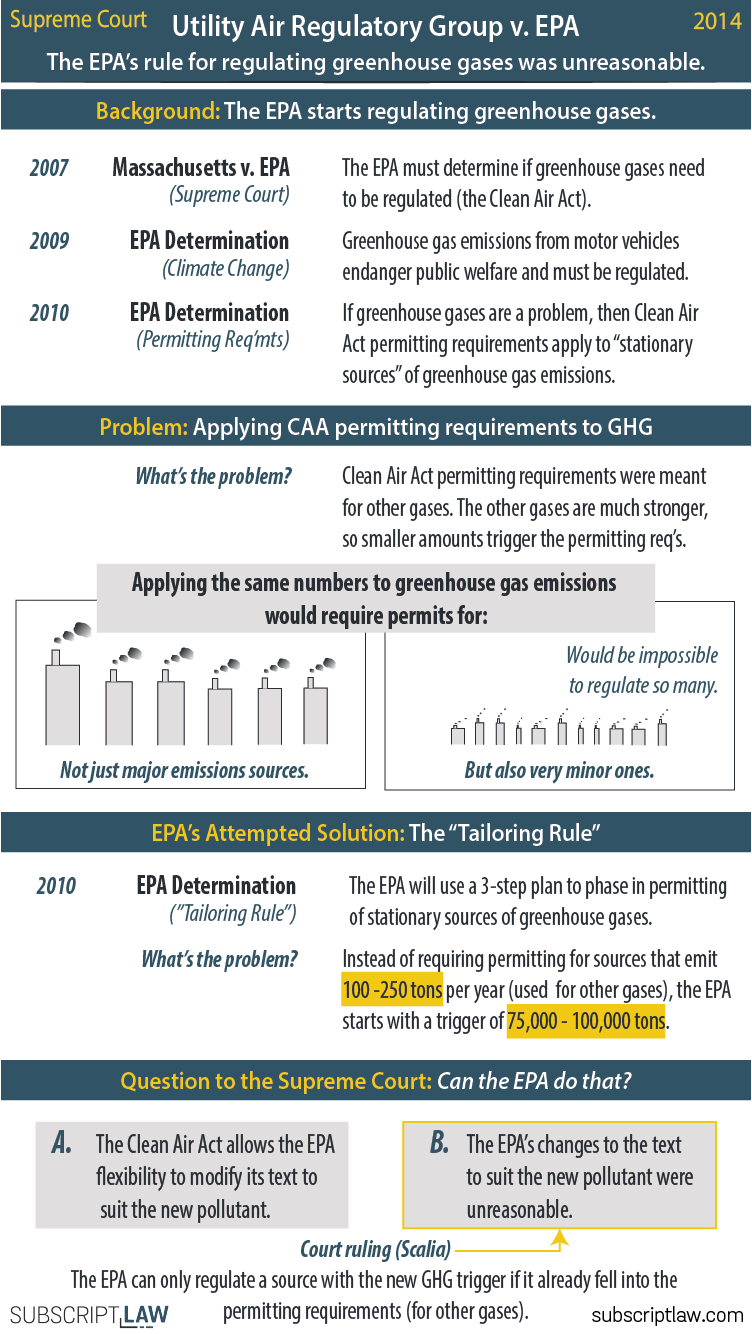 The 1977 amendments to the Clean Air Act established certain permitting requirements on stationary sources of air pollutants. Plants, for example, and other stationary sources that emitted polluting gases between 100 and 250 tons per year would have to get permits for any modifications or new constructions. But the polluting gases that the 1977 amendment had in mind were not greenhouse gases. They were polluting gases that are intolerable when they are much less in number than greenhouse gases. In other words, 100-250 tons as a trigger for greenhouse gas permitting would be impractical. The EPA admitted it could not regulate so many facilities anyway.

Not so fast, said more than 70 business groups, advocacy organizations and a group of state governments. The EPA cannot just change the numbers in the Clean Air Act. If the Clean Air Act contains numbers that are so absurd, then obviously, the permitting program cannot apply to greenhouse gas regulations. The absurdity, the challengers claimed, points out the unreasonableness of the EPA’s interpretation.

Scalia got to write for the Court this time

The decision in UARG v. EPA is tricky to analyze because five Justices (the number it takes for a win) could agree on only part of the opinion. The conservative wing (including Kennedy this time) ruled that the EPA did not have the authority to change the emissions numbers to suit the new pollutant. The fact that the numbers in the Clean Air Act were way too low to suit greenhouse gases meant that greenhouse gases could not trigger the permitting requirements.

However – and this is where some of the conservatives fell away and the liberal wing joined Scalia to get to five Justices – the EPA was allowed to use the permitting scheme, as long as a given stationary source was already subject to it. So, if a stationary source (like a major plant) was already required to get a permit under the Clean Air Act Amendments because of its emissions of other gases, then the EPA could require it to satisfy greenhouse gas standards too.

Here is the opinion.

Before reaching the Supreme Court, UARG v. EPA had come through the D.C. Circuit – Kavanaugh’s home. The D.C. Circuit ruled in favor of the EPA, allowing the EPA to have authority to edit the permitting program to suit greenhouse gases. However Kavanaugh was not on the 3-judge panel that decided the case.

The challengers asked the full panel – this time including Kavanaugh – to rehear the case (basically a second chance to get more judges involved), but the full panel rejected the request. In dissent, Kavanaugh had a chance to state his views. It would turn out that Scalia would take note.

Kavanaugh started his dissent by acknowledging the two sides of the issue:

“This case is plainly one of exceptional importance. A decision in either direction will have massive real-world consequences. The U.S. Chamber of Commerce describes the EPA regulations at issue here as ‘the most burdensome, costly, far-reaching program ever adopted by a United States regulatory agency.’ On the other hand, EPA issued these regulations to help address global warming, a policy issue of major long-term significance to the United States. Put simply, the economic and environmental policy stakes are very high.”

And directly following, Kavanaugh stated that it’s not the role of a court to make policy choices. It’s not a court’s job to make the choice on economic versus environmental interests.

The role of a court, he continued, is “to ensure that EPA has acted within the authority granted to it by Congress,” and he concluded the EPA had gone too far with respect to its “tailoring” of the permitting scheme.

Kavanaugh was most impressed by the absurd results that all parties (including the EPA) admitted would result from taking the permitting scheme triggers (the 100-250 ton numbers) and applying them to greenhouse gases. He reiterated in his dissent that the absurd consequences should indicate the EPA was taking the wrong route.

Kavanaugh also included some notes indicative of the view he espoused in U.S. Telecom v. FCC: that for such a major regulation, a court must find some explicit indication in the statutory text that Congress wanted it regulated.

“[The regulation would] impose enormous costs on tens of thousands of American businesses, with corresponding effects on American jobs and workers; on many American homeowners who move into new homes or plan other home construction projects; and on the U.S. economy more generally. Yet there is literally no indication in the text or legislative record that Members of Congress ever contemplated – much less intended – such a dramatic expansion of the permitting requirement of the Prevention of Significant Deterioration statute. Courts do not lightly conclude that Congress intended such major consequences absent some indication that Congress meant to do so.”

The result left EPA in a decent position to regulate

Because the Supreme Court ruled that the EPA still could apply permitting requirements to stationary sources that were already bound by the permitting scheme, the EPA came out retaining significant authority to regulate on greenhouse gases. The agencies already subject to the permitting scheme accounted for a huge percentage of those the EPA was seeking to regulate as a whole (an estimated eighty-three percent).

It is not clear that Kavanaugh would have voted for this essential piece, but the decision on this part was 7-2, so the liberal wing might still have had a hold.

Kavanaugh has made clear that agencies should not be able to pull major issues of regulation into statutes that weren’t explicitly designed to address those issues. Thus, he likely would not have voted as Kennedy did in Massachusetts v. EPA, which would have left the EPA unable to regulate emissions from greenhouse gases.

Then in the follow-up case (UARG v. EPA), Kavanaugh may have taken a more conservative stance on agency authority than Scalia did. He might not have given the EPA the power to apply the stationary source permitting scheme to greenhouse gases, even for sources that were already bound by the scheme.

Would Kavanaugh’s limits to agency power be good or bad for governance? In the comments section below, leave specific examples on how the change could affect other realms of law!