How does the nature of administrative power relate to conservative and liberal differences on regulation?

President Trump’s 2018 Supreme Court nominee Brett Kavanaugh has made a number of decisions relating to agency power. That’s because he sat on the appeals court in the D.C. Circuit, which is where a lot of challenges to federal agency action are filed.

Administrative law is a field of law that is both very important and very confusing. We want to give you some background before we dive into Kavanaugh’s voting tendencies on the issue. So here it is.

Today’s federal agencies control many responsibilities of the federal government, but they weren’t always such a large part of governing. The first agencies were the Departments of War, State, Navy, and Treasury. They were each established through a Congressional act in the 18th century. Then came a few more: the Department of Interior in 1849; the Department of Justice in 1870; and the beloved Post Office in 1872.

Some say the next set of agencies to come along were inherently different. All agencies help the government govern, or to carry out tasks. But in 1887, the Interstate Commerce Act established an agency to control over private industry.

The Interstate Commerce Act controlled the shipping rates that railroads could charge to farmers and merchants for sending freight between states. Congress determined the rates had gotten out of hand (the railroad industry was monopolizing), and it decided that the government would need an agency – the Interstate Commerce Commission – to help carry out the laws. Perhaps some would say it was the Pandora’s Box of agencies that started meddling in private economic affairs.

After the Great Depression, under President Roosevelt, the country saw a surge in administrative agency authority. Roosevelt and his Congress established an “armada” of government bureaus so the government could take control over many issues previously left to regulation by states and local governments.

Reining in the agencies

Increased industry costs makes industries unhappy and potentially unable to carry as large of a workforce. And by the way, they said, why are these federal agencies making all the rules? Congress is the law-maker. They argued the legislative branch isn’t supposed to delegate its law-making authority. That’s the “non-delegation doctrine,” which was put to rest by the Supreme Court in 1928 (J.W. Hampton Jr. v. United States).

Congress is allowed to delegate legislative authority to the executive branch, as long as it provides some guidance (an “intelligible principle” to guide in policy-making) – not just an open-ended statement to make laws on a topic. In 1934, the Supreme Court struck down two New Deal delegations of agency authority under the “intelligible principle” rule (Panama Refining Co. v. Ryan; A.L.A. Schechter Poultry Co. v. United States).

In 1946, the Administrative Procedure Act emerged, and it is still a major check on agency power today. Agency policy-making and other actions must be done fairly.  More specifically, agencies must follow certain procedures when they make policies and issue decisions. And those procedures are set out in the “APA.”

As it relates to policy-making, the APA requires agencies to follow an open public process, which includes giving the public notice when they consider a rule, accepting public comments, and publishing records of the process. Publication of the final rule must show the agency reasonably addressed the comments (See Federal Register, The Rulemaking Process).

But what about substance?

The APA governs the processes by which agencies can make rules but what about the substance of the rules coming from the agency?

Those are set by Congress, in the act of delegating authority to the agency. That would be the law which tells the agency it has the power to make policies in a certain area.

Consider the Clean Air Act. It delegates authority to the Environmental Protection Agency. The Clean Air Act sets out general guidelines for the EPA’s policy-making, and then it says, Ok, EPA, it’s up to you to decide how, specifically, to get this done. Determining the agency’s boundaries, however, can get a bit tricky. For example:

In the Chevron case, the Supreme Court had to decide whether the EPA appropriately interpreted a particular term, “stationary source of air pollution.” The EPA had determined that an industrial plant as a whole could be a “stationary source,” and NRDC argued a “stationary source” had to be a single source within a plant. NRDC wanted the stricter definition because it would have resulted in more stringent regulations on the plant’s emissions.

The Supreme Court ruled for the EPA: that the EPA acted within its boundaries when it interpreted the term. In doing so, it set out a way for courts to evaluate whether the agency was acting within bounds. That’s the “Chevron doctrine,” now infamous among law students and scholars.

The Chevron doctrine sets out steps for a court to follow in analyzing the agency’s authority. We made an earlier infographic with those steps. But we must say, today’s infographic does better.

The infographic in this report shows – in one snapshot picture – what Chevron allows vs. what is outside the scope of the agency’s authority. And it shows an additional reference, too…

As indicated by the mini-history lesson on administrative agencies above, agencies came into a lot of power at a time when progressive policies were being enacted. From the Pandora’s Box agency regulating the railroad industry through the New Deal and the agencies that carry welfare and economic regulation policies today, federal agencies tend to restrain industries (i.e. corporations) and thereby don’t get strong favor from economic conservatives. On the other hand, the liberals tend to appreciate them.

The spectrum in the infographic puts into context the opposing views on agency power. And the spectrum will help us analyze how judges with particular ideological leanings tend to make decisions.

Where does Kavanaugh fit in? That’s coming up next! Stay tuned for Part II of our Kavanaugh Series. 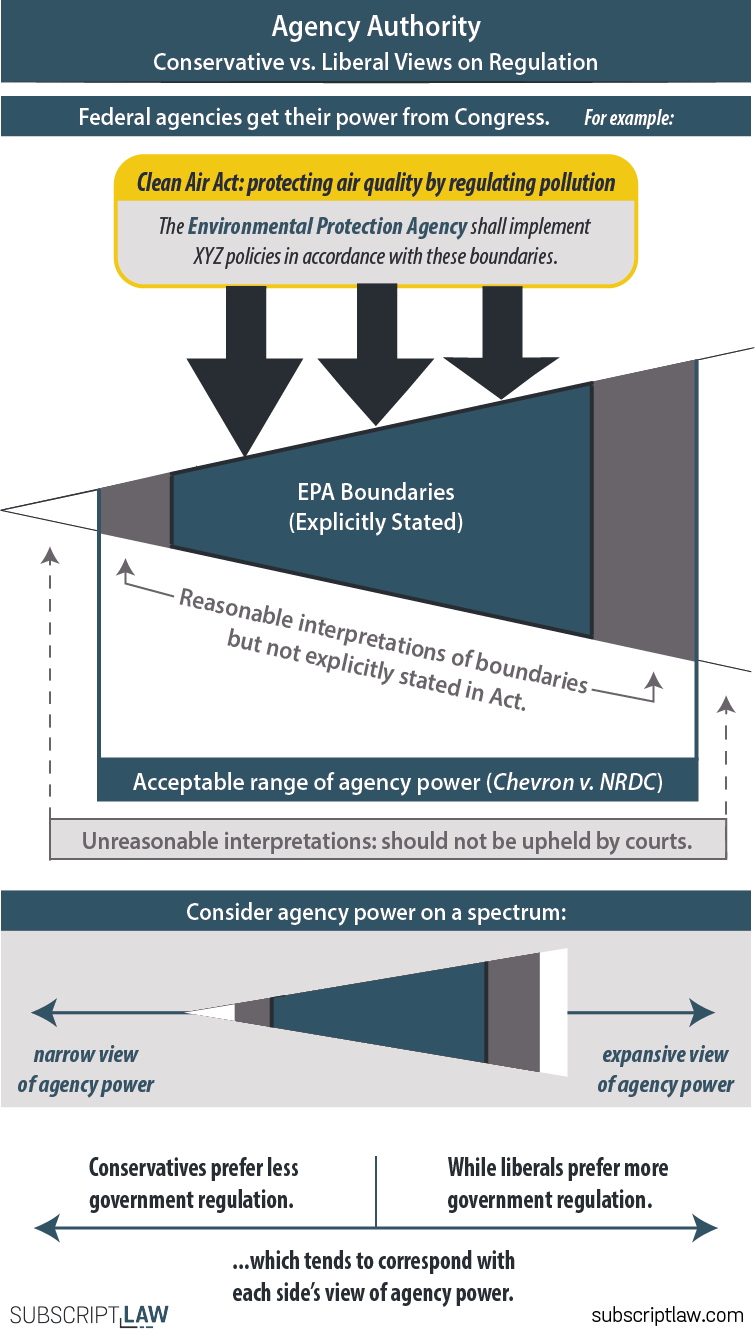