On June 30, 2020, the Supreme Court ruled in favor of Espinoza, reversing the ruling of the Montana Supreme Court. The Montana constitutional provision cannot prohibit the school scholarship program from benefiting religious schools. 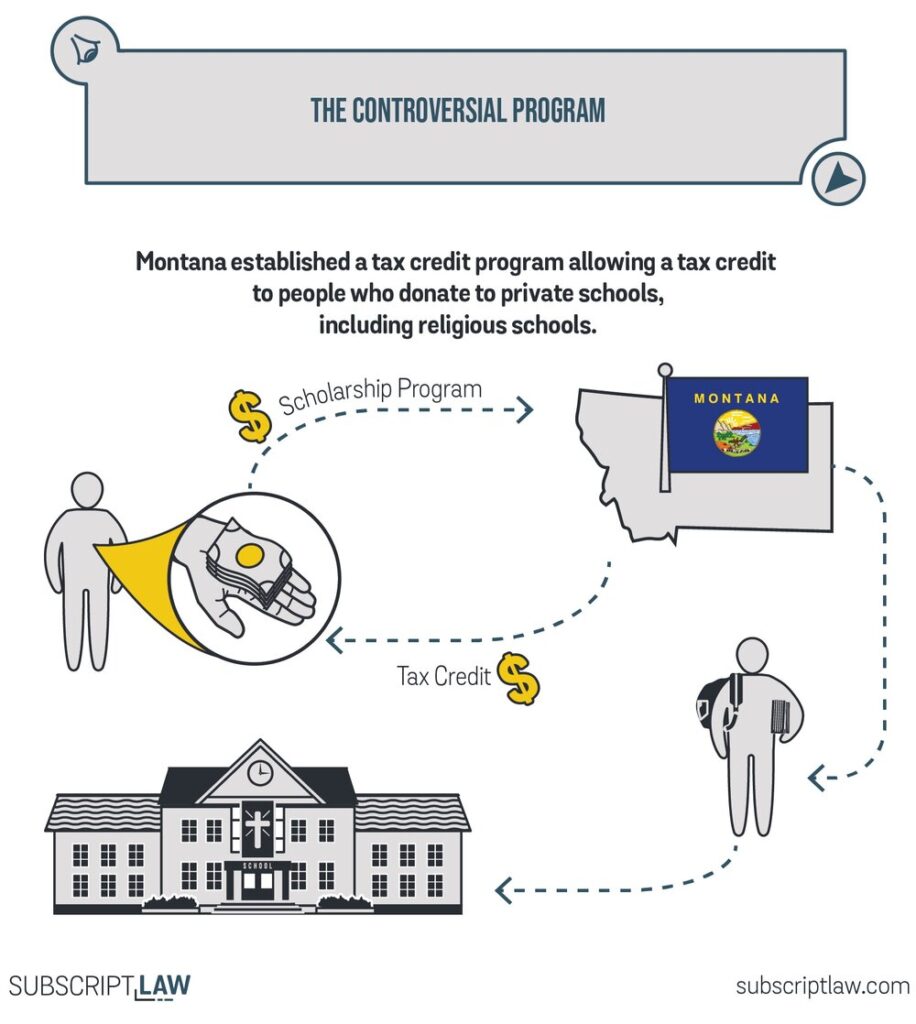 Montana’s Department of Revenue was tasked with administering the tax credit program. When it began working to carry out the program, it realized the program — as written by Montana’s legislature — came into conflict with the Montana Constitution.

The Montana Constitution includes a provision called the “Blaine Amendment.” The Blaine Amendment prohibits the state from using any state funds to “directly or indirectly” benefit a sectarian/religious purpose. The tax credit program planned to disburse scholarships to be used at private religious schools, which would indirectly benefit sectarian purposes.

Parents of children who attend religious private schools sued the Montana Department of Revenue. They argued that Rule 1 violates the U.S. Constitution. Rule 1 acts with hostility towards religion, which the Constitution does not allow. Of course, the plaintiffs admit, the Establishment Clause says the government cannot endorse religion or any particular religion, but the government can act neutrally towards religion. That’s what the tax credit program did originally, by not making a distinction of religion at all.

Plaintiffs continue that the First Amendment contains another requirement to ensure the Free Exercise of religion. Ensuring free exercise, thus, means the government cannot single out religious schools and forbid the tax program from benefiting them. Rule 1 does just that, whereas the original tax program acted neutrally towards religion.

The plaintiffs point to the Equal Protection clause too: the government cannot treat religious groups differently than non-religious groups. When the Blaine Amendment goes so far as to prohibit a neutral tax program from benefiting people based on their religion, then it has been used unconstitutionally. The United States Constitution prevails over the Montana Constitution, which means, as the plaintiffs argue, Montana’s Rule 1 is invalid.

Tension between the Free Exercise Clause and the Establishment Clause

The answer depends on how strictly one interprets the Establishment Clause. How strong must the “wall of separation” between the government and religion be?

Montana’s Blaine Amendment imposes a strong interpretation of the wall between the government and religion. No government money can cross the wall.

In the trial court, the plaintiffs won. The Montana trial court ruled that the Department of Revenue’s Rule 1 violated the U.S. Constitution by excluding religious schools from the tax credit program.

Question in the Supreme Court

Defending the Montana Supreme Court ruling, the Montana Department of Revenue says the plaintiffs cannot complain of being treated unfairly because now no one has a tax program. It’s not discriminatory towards religion because the program is erased. It can’t violate the Equal Protection clause because the non-program treats everyone equally.

This is different than the situation in Trinity Lutheran Church v. Comer, Montana argues, where the Supreme Court invalidated a Missouri rule prohibiting public funds from resurfacing a playground at a church daycare. In Trinity Lutheran, the public funds were going to resurface playgrounds at some schools, just not religiously-affiliated ones. In contrast, in this case, there’s no money going anywhere, so the current state does not offend the Constitution.

The Supreme Court will hear arguments on January 22, 2020.

Montana created a school scholarship program to help students attend private schools in the state. The state incentivized donations into the program by offering tax credits to donors.

The Supreme Court accepted the case to review whether the exemption of religious schools violates the Free Exercise clause of the U.S. Constitution.

Roberts stated that the First Amendment allows people to freely exercise religion. The Free Exercise clause prohibits the state from discriminating against people based on their religious views. Following from the Free Exercise clause, Roberts said, is that a state may not specifically exempt a person from benefiting from an otherwise generally applicable state program just because that person chooses to attend a religious school.

The opinion relied on a Supreme Court decision from 2017. In Trinity Lutheran Church v. Comer, the Court ruled that a state program which provided funds to nonprofits to resurface school playgrounds could not exempt religious schools from getting playground resurfacing aid. The Court said the law functioned to discriminate against a church simply because it was a church, a religious institution. In Trinity Lutheran, the Court applied the “strictest scrutiny to evaluate whether the prohibition could stand. Like in that case, the Court would apply the strictest scrutiny here.

To defeat the strictest scrutiny review, the Court stated, the government action “must advance ‘interests of the highest order’ and must be narrowly tailored in pursuit of those interests.” Roberts rejected the state’s contention that its exemption of religious schools from the program served the purpose of actually advancing religious liberty (i.e. that by separating church and state, the state advances a policy of religious neutrality and encourages freedom of religion). Roberts also considered whether the state’s purpose could be to advance Montana’s interests in public education by ensuring that funds go to state schools. But the program does benefit other private schools, Roberts said. Thus, once it does that, it must remain neutral toward religion and allow religious private schools to participate just like non-religious ones.

Lastly, the Court considered the current condition of the program. Before reaching the Supreme Court, the Montana Supreme Court actually struck the scholarship program in its entirety. It ruled that the no-aid provision did not allow the program to exist in its original form — the form that allowed religious schools to participate. So, given that the program benefits no schools, not religious ones, and not non-religious ones, isn’t it now religiously neutral?

Not so, the majority ruled. The only reason the program was stricken was because of the no-aid provision, an action this Court rules invalid based on the U.S. Constitution. So the rationale of the Montana Supreme Court in striking the original program cannot stand.

Based on the majority decision, the program exists in its original form. And the state cannot use the no-aid provision of the Montana Constitution to amend the program to exclude religious schools.

Justice Thomas concurred in the majority opinion and wrote a separate opinion joined by Justice Gorsuch. Thomas wrote to clarify his interpretation of the Establishment clause and his concern for the Court’s current precedent on the conflict between Establishment and Free Exercise.

Justice Alito concurred in the majority opinion and wrote separately to note the history of the no-aid provision, which emerged from a period of discrimination against religious practices.

Justice Ginsburg wrote a dissent on behalf of herself and Justice Kagan. She argued that the Montana Supreme Court’s decision invalidating the program entirely should stand. The program does not exist after the Montana Supreme Court decision, and so the state treats religious and non-religious schools neutrally. The government cannot be faulted for neutral governmental action just because it fails to benefit religious exercise.

Justice Breyer wrote a dissent on behalf of himself and Kagan. Breyer acknowledged that it’s very complicated for the government to both support religious exercise and also to remain neutral towards religion as the Establishment Clause demands.

Breyer argues that, in a state’s efforts to be neutral toward religion, it should be allowed to exempt certain especially religious endeavors — like religious education — from funding. He points to a different Supreme Court case: Locke v. Davey that he argues applies instead of Trinity Lutheran. In Locke v. Davey, the state of Washington was allowed to fund scholarships for college with the exception of degrees that were “devotional in nature or designed to induce religious belief.” The Supreme Court allowed Washington to create that exception, and Breyer argues the case is applicable here.

Justice Sotomayor dissents, arguing that the majority should not have addressed the constitutionality of the no-aid provision as a whole because the parties in the case did not request facial challenge. The petitioners only requested the Court to review the application of the no-aid provision. The Montana Supreme Court did not use the no-aid provision to mandate differential treatment for religious schools; it used the clause to strike the program entirely, which is valid. The Free Exercise clause does not require a state to enact a program just because it might benefit religious schools, she argues.

Sotomayor also argues that the majority is wrong to say that a state program that funds non-religious institutions cannot exempt a religious one just based on its religious status. She says governments have always been able to single out religious purposes from receipt of state aid, in respect of the Establishment Clause. “[A] State’s decision not to fund religious activity does not disfavor religion; rather, it represents a valid choice to remain secular in the face of serious establishment and free exercise concerns.”