China Agritech does business relating to the manufacture and sale of organic farming products. It began listing shares on NASDAQ in 2005 and in 2009 issued a public filing that would become the source of several lawsuits.

In 2011, a market research company reported that the 2009 filing made grossly inflated statements of China Agritech’s revenue and value. Companies can’t do that. Shareholders sued for having been misled. Plaintiffs tried two different class actions, one after the other. Each one failed class certification.

Getting a class “certified” is a major hurdle for class litigants. In a class action, the plaintiffs who bring the case will define an entire class of people who have experienced the same harm as them, based on the same harmful action(s) of the defendant. When deciding whether to certify the class, the court will consider whether the class is well-defined (the issues are common enough; the group is large enough) and the “named plaintiffs” (those who brought the suit) are going to be good representatives for the whole group.

At a time when the Supreme Court was encouraging class actions (as efficient ways to resolve litigation), it made a rule. It said in American Pipe and Construction Co. v. Utah (1974) that if there is a class action going on that would include your claim but you are considering otherwise joining an individual lawsuit, you can wait and see how the class action turns out. The Court decided that in this situation, the time period in which you must file is paused (tolled) while the class action is ongoing.

In this series of litigations against China Agritech (all based on the same events), the regular time period for filing had run short because of the first two class actions. If Resh had wanted to file an individual suit, Crown, Cork and Seal would have had him covered (by tolling the time period). But Resh wanted to file a class action. He tried anyway, but China Agritech said, wait a second. The Crown, Cork and Seal rule doesn’t apply to class actions.

The lower court, the 9th Circuit Court of Appeals, agreed with Resh and allowed the class suit as timely. The court said extending the tolling rule supports the efficiency that class actions are meant to achieve. The 9th Circuit also said that the ruling is not unfair to defendants. It would not encourage continuous litigation because future potential plaintiffs and their attorneys will have little to gain by filing suits that have already been marked as unlikely, and courts across the nation would respect other courts’ decisions on substantially similar claims. 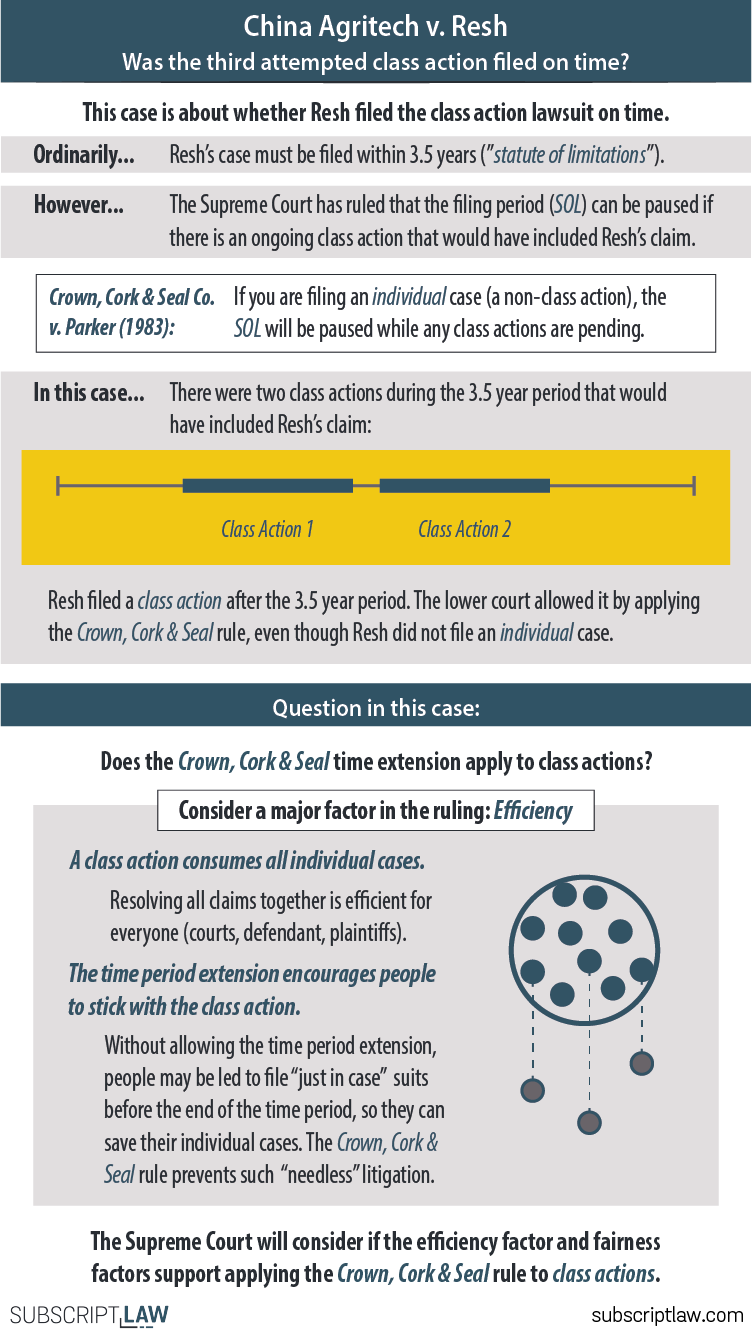