Can Trump build the border wall without Congress’ approval?

President Trump is taking action to try to fulfill his border wall campaign promise. But he can’t get enough support in Congress. What power does he have to do it on his own?

Building a border wall requires a legal mandate to build the wall and the money to build it. Both of these are traditionally legislative powers. Generally, it’s Congress that makes mandates. The executive just enforces Congress’ mandates. It’s also Congress that was given the “power of the purse.” Congress must authorize all payments out of the federal budget.

Congress already has given the executive the legal power to build the wall. And it’s actually very clear. The Illegal Immigrant Reform and Immigrant Responsibility Act (1996) says:

[The executive] shall take such actions as may be necessary to install additional physical barriers and roads . . . in the vicinity of the United States border to deter illegal crossings in areas of high illegal entry into the United States.

The IIRIRA also says that the Department of Homeland Security can waive any other federal laws to do it:

[DHS can waive] all legal requirements [that DHS determines] necessary to ensure expeditious construction of the barriers and roads under this section.

That’s a bold move. That’s all federal laws – including the ones that usually stop abusive executive actions. In some ways, the waiver provision is actually granting the executive a rule-making power. The power to un-make (to waive) federal laws.

Using the above provisions of the IIRIRA, the Department of Homeland Security already has several wall prototype projects started on the southern border. You may have missed this lawsuit, but a bunch of environmental groups and the State of California challenged the prototype projects. They argued that the executive branch should not have the power to waive all federal laws in order to build the wall.

The challenge was rejected by the 9th Circuit last week.

Shortly after Trump received a favorable ruling in the 9th Circuit on his border wall building power, he declared a national emergency so he could get the money to do it. The IIRIRA — despite giving the executive the power to build the wall — did not give the executive the money to build the wall. The money would still have to come from Congress. But Trump is now trying to get around that.

Infographic: delegating to the executive

This graphic shows how how legislative (rule-making) power can be delegated to the executive generally; and then also how the executive can divert certain funds in cases of national emergency.

Delegation of lawmaking power: The executive branch makes rules all the time. And in 1928, the Supreme Court said Congress can do so liberally, as long as Congress gives the executive an “intelligible principle,” or guidelines for a particular executive agency or officer to follow.

When the 9th Circuit lower federal court addressed the challenge to DHS’s border wall prototype project, it said Congress’ guidelines in the IIRIRA were adequate.

Redirection of funds: This is less of a delegation and more of a “special circumstances” exception. Trump wants to take advantage of a couple of federal laws that apply only in cases of national emergency. Under 10 USC § 2808, the executive can divert military construction project funds (pre-appropriated but not yet obligated) in cases of national emergency. And under 33 USC § 2293, the executive can divert funds for Army Civil Works projects for use in the national security efforts.

Federal laws are clear that the President can declare a national emergency, and they don’t give guidelines about how urgent the situation must be.

The Constitution would probably provide the best chance for a challenge, but the challenge would have to come from someone or some group that will be directly harmed by the president’s declaration. People whose lands might be seized in border areas may have a challenge based on the “Due Process” clause (the government can’t take private property unfairly).

Updated: On February 18, 2019, a group of 16 states brought suit against the Trump administration’s use of the national emergency powers to get funding for the border wall. The states argue the administration violated several Constitutional principles, including Separation of Powers and the Appropriations Clause (that it must be Congress which allocates federal spending) and that the administration acted outside of its authority in claiming a national emergency when there is not one. The suit also includes a claim based in federal law on an environmental statute.

Can Trump build the border wall without Congress’ approval? 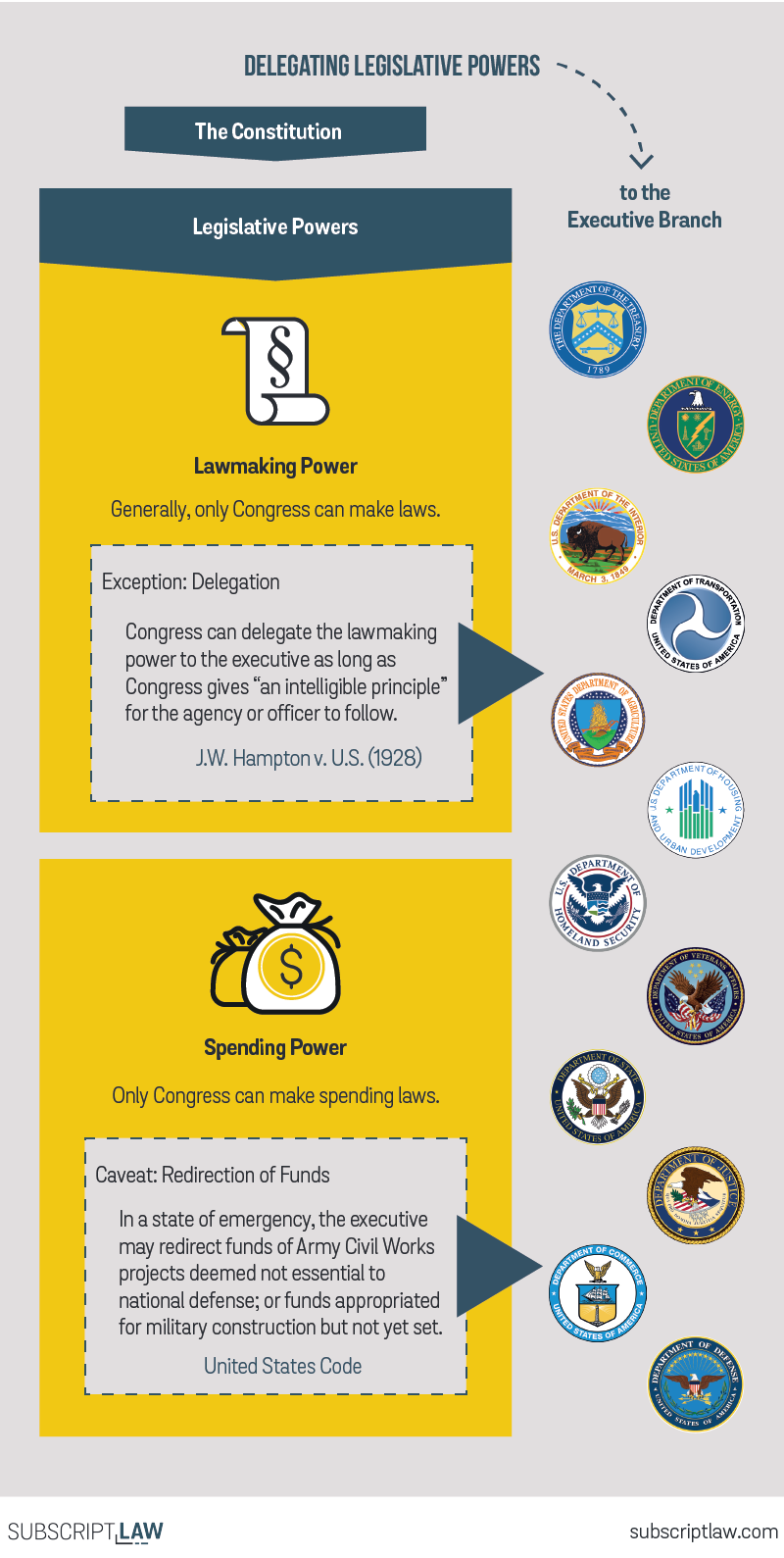