Foreign governments can kindly tell U.S. courts how to interpret their own law, but U.S courts still make the final call.

What happens when the Chinese government submits an “amicus brief” about how to interpret Chinese law?

That’s what the Supreme Court decided in Animal Science Products v. Hebei Welcome Pharmaceutical. Hebei, a Chinese company, argued to a federal court that it was bound by Chinese law to take the actions which would make it liable here for antitrust violations. If that’s the case, the court will excuse the company’s actions.

So China helped the company out by submitting a brief.

What is an amicus brief?

An amicus curiae brief – or a “friend of the court” brief – is a view submitted by someone that is not a party to the case. So here, China is not a plaintiff or a defendant, but it has something to say. It will request the court to listen to its view. That’s the amicus brief. You’ll see, for example, advocacy groups like the ACLU or AARP submitting amicus briefs to share with the courts their views of cases.

What were the options?

The court could either take the Chinese brief as true, or it can do its own investigation.

The lower court in this case said that the principle of “international comity” (another friendship-type word) requires a court to follow the foreign government’s interpretation unless it’s unreasonable. Again, remember that we are talking only about following how the foreign government would interpret its own law, not any other issues in the case or U.S. law.

The alternative would be that the Court just takes the Chinese brief into consideration but in the end makes its own call. Hebei threatened that this view would offend foreign countries and could create some tension.

Our earlier infographic on the case outlines some of the other policy arguments on either side.

The Supreme Court ruled for Animal Science Products – that a court must make its own decision. Of course the court should give respectful consideration to the Chinese interpretation, but it is not required to follow it.

The decision mainly rested on a federal procedural rule. The rule says that courts “may consider any relevant material or source” when analyzing cases. Because, the Court said, a decision of applying international law to the specific case will always require analysis, the procedural rule requests that courts don’t follow just the one source.

The Court also mentioned that when a state government (a U.S. state) submits an amicus brief in a case about the state’s own law, courts don’t just blindly follow the interpretation in the brief. They are only required to defer to decisions of the state’s highest legal authority – not views expressed by the state in a brief. Thus, to parallel the respect given to our own states, the Supreme Court said courts should do the same with foreign government briefs. Respect but not deference. 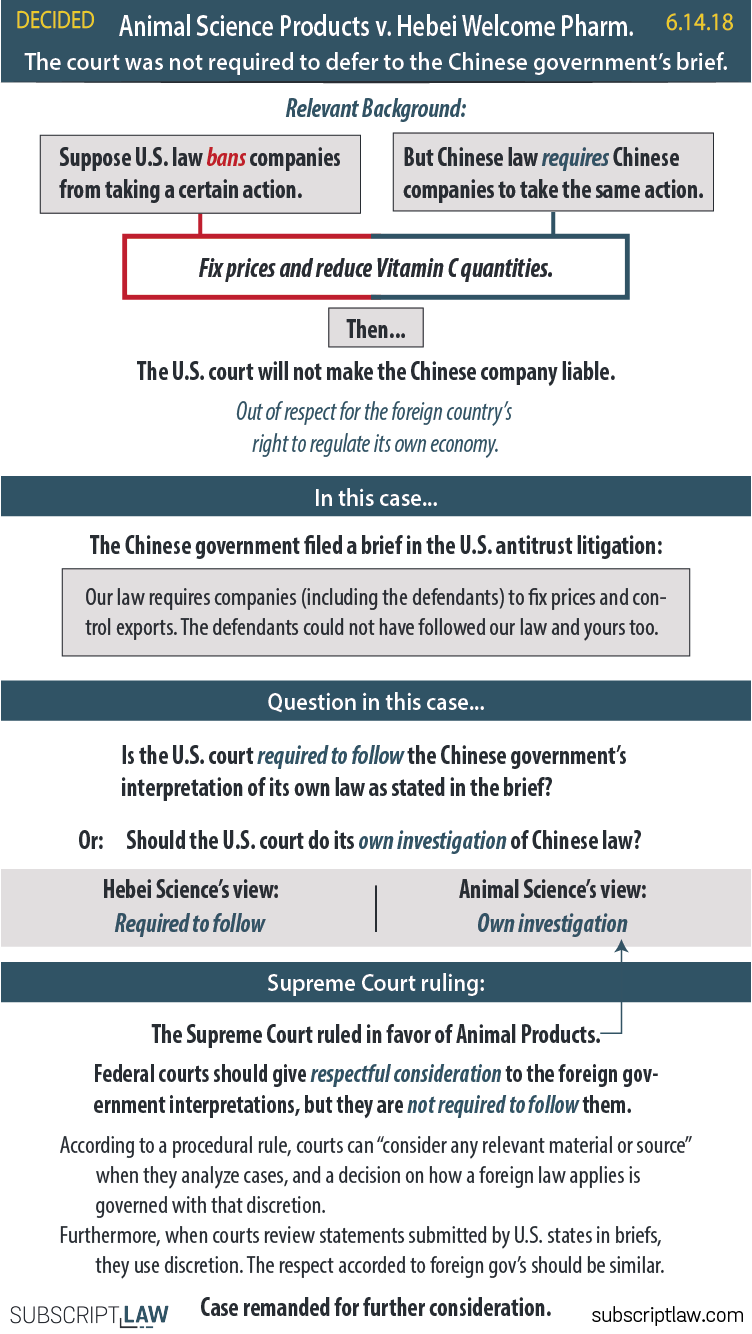