This case has been decided. See how it turned out!
View infographic

This case could upset the Chinese government – and maybe more governments down the line too.

The case has to do with “international comity.”

Comity comes from courtesy. International comity – in law – is a principle saying that one country should give courtesy/respect to another country’s sovereignty (i.e. self-rule, or right to govern itself). If you want to have friends in the international community, you probably want to respect the laws of other countries.

The corollaries of that principle aren’t exactly all specified. A court might use the principle to justify a ruling related to a foreign law, but court policies can be a bit muddled. In this case, the appeals court justified itself based on international comity, but Petitioners argue it should not have.

Petitioners – Animal Science Products (with another company and a class of U.S. Vitamin C purchasers), filed a class action litigation against Hebei Welcome Pharmaceutical and another Chinese company. They alleged the Chinese companies were price-fixing and setting export limits on Vitamin C products sold to U.S. companies, to maintain a certain market power. They argued the companies’ behavior was anti-competitive action in violation of U.S. antitrust laws (the Sherman Act and Clayton Act).

The Chinese companies argued that they were obligated to take the actions that the plaintiffs were calling anti-competitive. They said the Chinese government actually required them to take the actions in order to comply with Chinese trade regulations. In fact, the Chinese government stepped in to the case. The Chinese Ministry of Commerce filed a brief saying: Indeed, we have some policies meant to serve our own economy, and within those policies, we require Vitamin C manufacturers to coordinate export prices and to control export quantities.

The district court (trial-level federal court) didn’t go for it. The court said the interpretation by the Chinese government didn’t sound like “a frank and straightforward explanation of Chinese law,” but more like a “carefully crafted and phrased litigation position.” The case went to trial, and the jury awarded the plaintiffs $147 million in damages against the Chinese companies.

The defendants (Chinese companies) appealed to the 2nd Circuit Court of Appeals.

In the appeals court, the defendants argued the district court should have deferred to the Chinese government’s interpretation of its own law.

The 2nd Circuit said that if Chinese law required the companies to take the actions, then international comity requires the court to dismiss the case. The parties don’t dispute that. As the appeals court said, international comity (“good neighbourliness, common courtesy and mutual respect”) in the area of antitrust law is especially important. If there is a true conflict of law – meaning a party cannot comply with both U.S. law and foreign law at the same time – then the court will not get involved.

The appeals court went with the former (overturning the trial level decision). It relied on a 1942 Supreme Court ruling (United States v. Pink) in which the Court adopted a Russian interpretation of a Russian government decree as conclusive without considering the whole body of evidence. To do the same in this context, the appeals court said it must adopt the Chinese Ministry’s interpretation of Chinese law and dismiss the case against the Chinese companies.

Now the plaintiffs appeal to the Supreme Court. They say that courts must not always take the foreign government’s interpretation – as stated in a litigation brief – as conclusive. They say the court is obligated to conduct its own research on foreign law.

The sides of each argument are outlined in the infographic. For more discussion, see Amy Howe’s argument preview on SCOTUSblog. 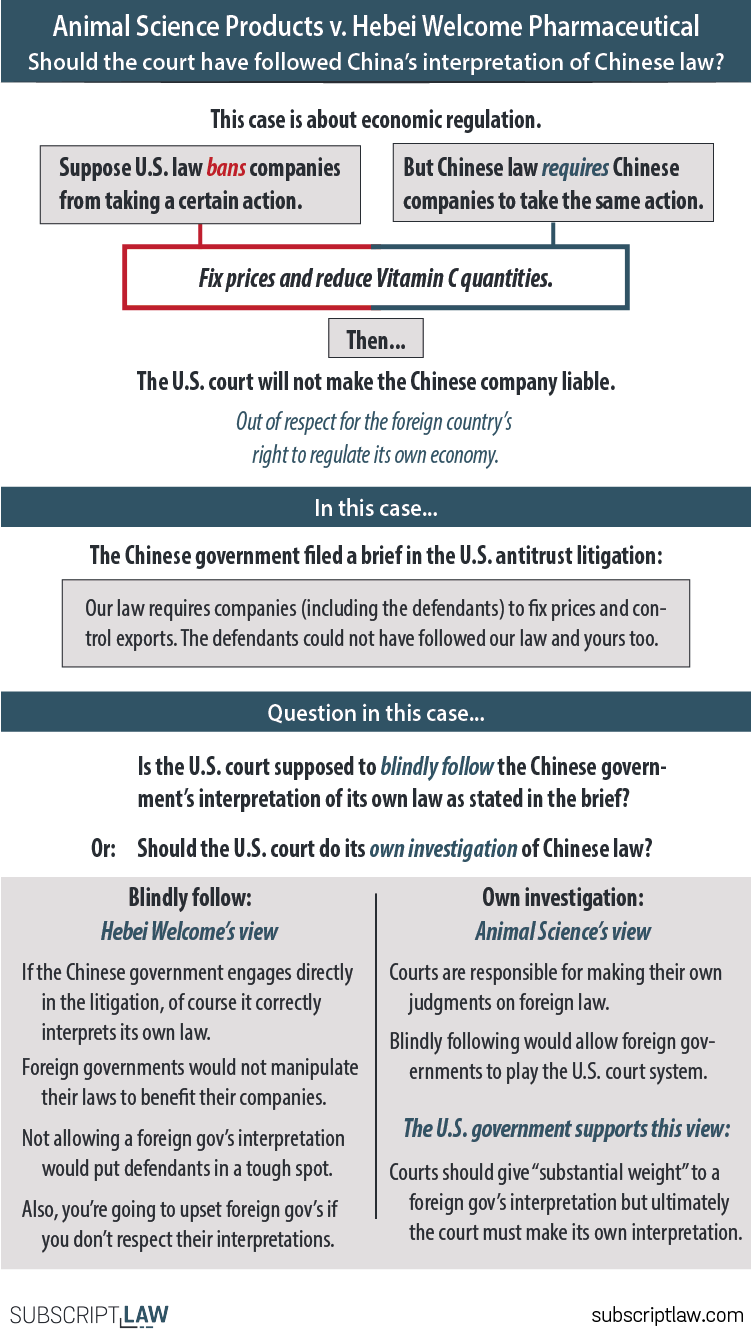