Wisconsin Central Ltd., a railway company, started giving some of its employees stock options as compensation in 1996. Since then, the employees have been paying a cut of the stock compensation into the mandated retirement plan. The Railroad Retirement Tax Program is the railway industry’s version of Social Security.

History of the program

The Railroad Retirement Tax Program was enacted as a distinct system from Social Security out of necessity in the years following the Great Depression. The existing pension system for railroad workers had been driven into a state of crisis by the economic collapse, and many retirees needed immediate assistance. The planned Social Security program would not cover work done before 1937, and it would not start paying benefits quickly enough.

The Railroad Retirement Tax Act was passed in 1937, after years of attempts at legislation. With the Act, 50,000 private railroad pension systems were transferred into the program. Employees and employers paid a tax of 2.75 percent of the employee’s first $300 of monthly income to fund the system.

The analysis of the issue came down to interpreting the phrase “money remuneration.” Either it includes stocks or it doesn’t.

The railway company pointed out that interpreting the plain language of the law, Congress did not include stocks. Stocks are not money remuneration because money is a “generally accepted medium of exchange” and stocks are not. The same Congress actually intended to include stocks in a different law passed around the same time. That was the law determining which compensation would be taxed under the Social Security program. In that law, Congress said “all remuneration” would be taxed. According to the railway company, Congress specifically intended that only wages be taxed under the RRTA. After all, Congress had modeled the railway pension system on the existing private railroad pension system, which taxed only wages. Furthermore, Congress had taken specific consideration of the historical nature of compensation for railway workers in passing the act with a different policy.

The government did not agree. It argued stocks are just like money. They can be traded for an exact monetary value at any time. According to the government, if you look at the history of the RRTA and the federal government’s treatment of the provision at the time, you can see it always meant to include stocks or other commodities. The program was created to better fund railway workers’ pensions, so Congress specifically intended to expand the compensation that was taxed (namely to include tradeable money-like types of compensation). An early federal agency opinion even says so. Moreover, the IRS, which now implements the program in large part, issued a rule in 1994 defining “money remuneration” to include stocks. Because courts must give deference (Chevron Deference) to federal agency expertise, the IRS’s view must be confirmed.

The Supreme Court ruled in favor of the railroad, Wisconsin Central. The conservative wing interpreted the term “money remuneration” to exclude stocks. 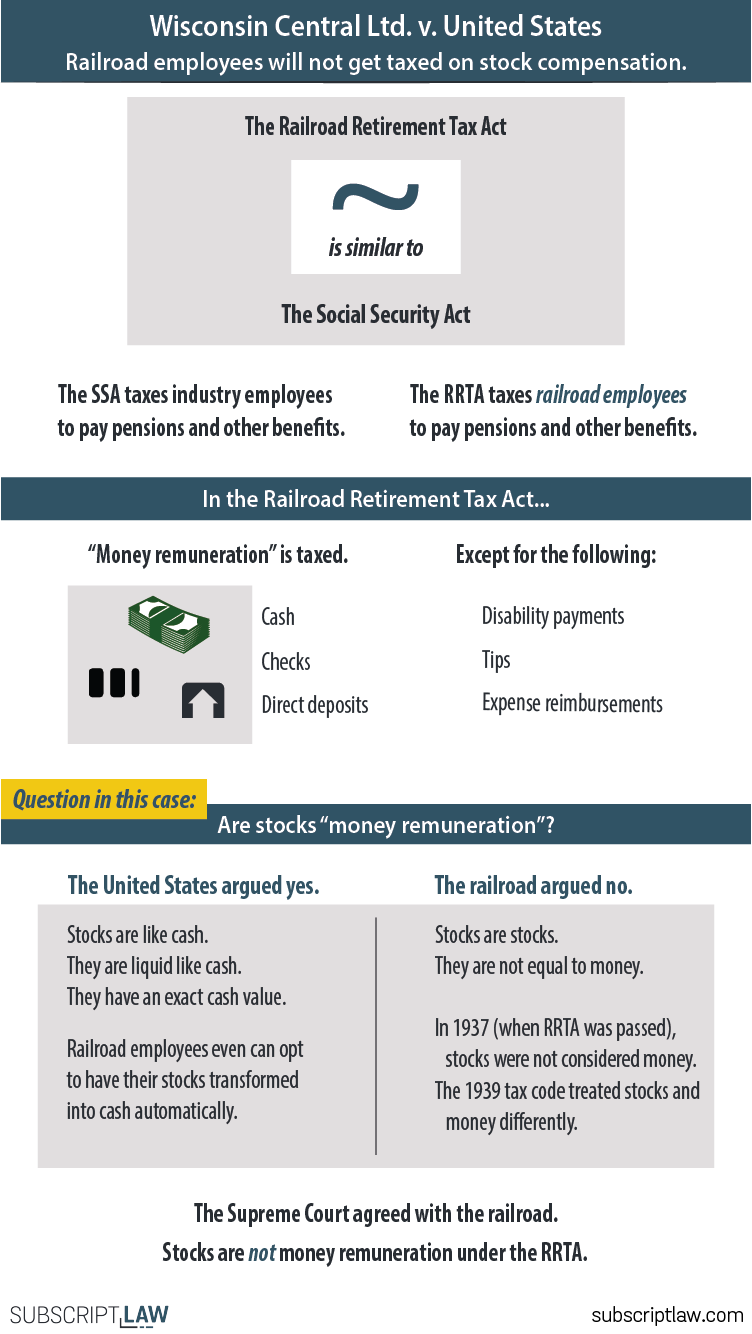