This case was affirmed without an opinion.

In 1854 and 1855, the United States signed a series of treaties with Indian tribes of the Pacific Northwest. The U.S. wanted the tribes’ land – and got it, in exchange for giving the tribes occasional monetary payments and the right to fish in all of the areas the tribes had been using.

At the time, salmon was plentiful. Now it’s not. Due to overfishing, land development (like building hydroelectric dams), climate change and other factors, the salmon supply has decreased.

But that doesn’t change that the treaties obligate the State of Washington to allow the tribes a “right of taking fish, at all usual and accustomed grounds and stations…in common with all citizens.”

How much fish does that guarantee?

That’s one of the main questions of dispute. The tribes point out that fishing is their livelihood. When they were granted the right to fish, the treaties contemplated that the “right to fish” should maintain their means of sustenance. Throughout the entire 20th Century, the tribes have had to fight to keep from being pushed out of the fisheries by non-Indian citizens. However, Washington says that conditions have changed, and the treaties did not intend for the guarantee of fish to the tribes to overtake the state’s own rights to fish, or the state’s obligation to preserve the salmon population. The plain fact is – salmon is not as plentiful as it used to be, and when the treaties guaranteed the tribes a share “in common with all citizens,” it did not intend – and could not guarantee – that the tribes would always have a sustaining amount of fish.

The federal court – which has been hearing this issue since the 1970s – stated the tribes should get a “fair share” of the salmon, characterized as enough for a “livelihood” or “moderate living.” From this characterization came a declaration that the tribes should get 50% of each salmon run, unless a lower amount is established to satisfy their needs.

Washington seeks to upend this declaration.

Washington is also taking a point of attack on the decision the lower court made for the remedy. The lower court ruled that the state would have to make major repairs to its infrastructure to guarantee the tribes’ fair share. It said that state culverts are the main cause of the problem (decreased flow to the fisheries). Culverts are construction tubes inserted to replace the natural flow of water when roads and other structures are built to cross rivers and streams (see the infographic). The court declared that Washington’s culverts are not letting the salmon get through into their natural spaces and into the tribes’ fisheries.

Washington claims it would have to spend billions of dollars to replace the culverts. It disputes whether it’s even clear that the culverts’ replacement would even solve the problem (guarantee the fish flow), and it appeals to the court’s general principles of “equity” to reject the order.

The United States brought the suit on behalf of the Indian tribes. It serves as trustee for the tribes. Yet Washington sought to have the United States barred from representing the tribes in the litigation because the U.S. was in a sense culpable. The U.S. government actually contributed to Washington’s decision to install the type of culvert at issue. Washington installed large numbers of highway culverts as part of a federal program which helped to fund them in exchange for following federal design standards. The federal government also approved the culvert permits. And now the government is actually suing the state for having added those exact culverts?

Furthermore, Washington says, the United States (federal government) contributed to the factors that have caused a decrease in the salmon population. The U.S. Army Corps built hydroelectric dams, and they altered the natural habitat in other ways that have led to fewer fish. It’s another way in which the U.S. cannot pretend to be innocent.

This is Washington’s last argument against the U.S. – also based on “equity.” It’s just not fair, Washington says, that the U.S. can bring a suit against Washington when it is responsible for various issues in the case.

Other state disputes over natural resources 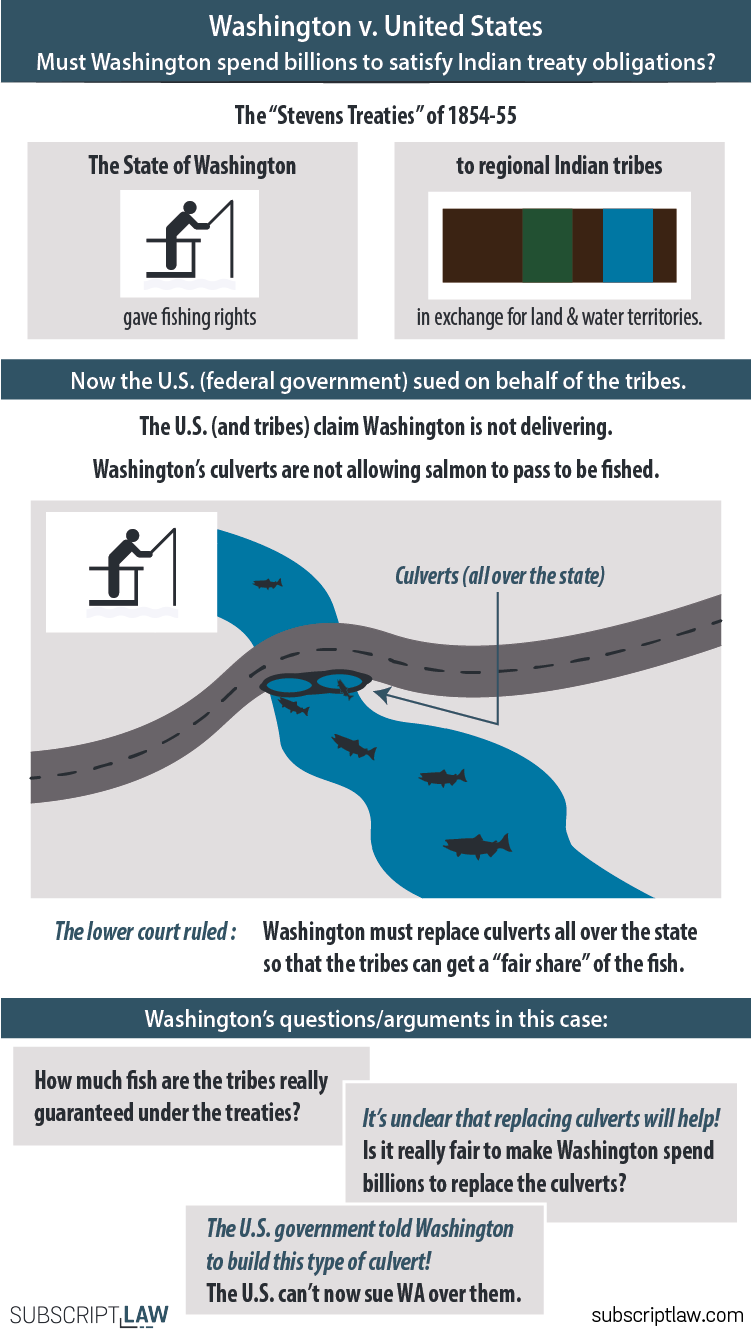