Courts Below: Sixth and Eighth Circuit Courts of Appeals 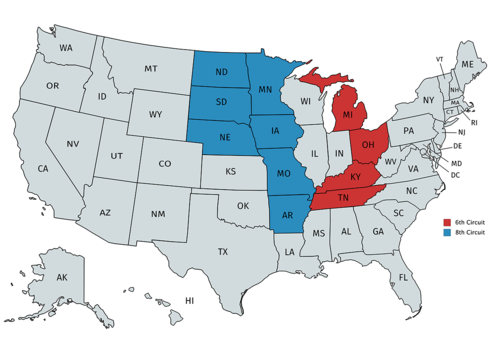 The Armed Career Criminals Act was passed in 1984 after Congress recognized that a large portion of violent crimes were committed by a small percentage of repeat offenders. The law created a severe punishment (15 year minimum) for firearm possession for people who had three or more prior felony convictions for burglary and robbery.Those were the types of crimes generally associated with violence.

In its current version, the ACCA imposes the 15 year minimum on people who have three or more prior serious drug or violent felony convictions. Burglary is included as a violent felony, but the exact definition got dropped somewhere while the law was being amended. The Supreme Court since has filled in the definition. Taylor v. United States (1990).

Stitt and Sims, the defendants

Tennessee and Arkansas define burglary to include intrusion into a vehicle that is habitable, like a mobile home, in addition to intrusions of buildings or other non-mobile structures. The ACCA may not include vehicles. It only clearly counts buildings or other non-mobile structures. In fact, Stitt and Sims argue, the Supreme Court in Taylor said the ACCA version of burglary specifically excludes vehicles – even vehicles meant to be used as residences.

The issue is whether Stitt and Sims’ prior burglary convictions will count under the ACCA. The Court was asked to address first, if the offenders’ convictions are for broader versions of burglary, do their prior offenses still trigger the ACCA? And next, are the Tennessee and Arkansas burglary definitions in fact broader than the ACCA version? In other words, does the ACCA version include habitable vehicles, despite Stitt and Sims’ arguments that it does not?

The Supreme Court took its cues from the Taylor case, which had some language purporting to support Stitt and Sims, but the Court nevertheless ruled against Stitt and Sims.

Question 1: If the state burglary definitions are broader than the ACCA definition, then Stitt and Sims will prevail.

The Court ruled, based on the Taylor case, that the ACCA definition of burglary cannot be triggered by a broader version of burglary, even if the particular offender would have qualified for the ACCA version.

This result seems counter to a logical alternative: You would think you could just look at a particular offender’s prior burglary convictions and see whether the offender had burglarized vehicles or just regular buildings. Stitt and Sims previously had committed burglaries of regular structures, so it seems easy to conclude the ACCA definition would apply to their cases.

However the Court’s “categorial” approach has its own justification. Courts need a rule for every case, and the ACCA was meant to come to a quick conclusion regarding past offenses.

Courts need one definition that can be simply computed for each case based on the case’s outcome, not by reviewing all of the inner details. Once a court digs into the various factual issues of each case, it’s tricky to avoid improper consequences.

Question 2: Does the ACCA definition include habitable vehicles?

The Court’s response to this question was the end for Stitt and Sims. It’s true that if the state burglary definitions were broader than the ACCA, then Stitt and Sims would have prevailed. But alas, the Court said no. The ACCA definition does, in fact, include burglaries in habitable vehicles – like the Tennessee and Arkansas definitions.

Furthermore, the Court said, a burglary of a vehicle that is designed for habitation is just as violent as a burglary as a building or other nonmobile structure. The ACCA is meant to punish for particularly violent crimes, so the sameness of the violence factor indicates the ACCA definition would incorporate burglaries in habitable vehicles.

The Supreme Court ruled Stitt will face the enhanced sentencing provisions of the ACCA. The Court ruled the same for Sims, except that Sims has one remaining argument to be addressed in the lower courts before facing the same result.