Dimaya won’t be deported based on the immigration law’s definition of “crime of violence.”

The Constitution guarantees that procedures taking away liberties cannot be vague or indeterminate. This “due process” guarantee implies that laws must be clearly written.

Dimaya challenged the law on which his deportation order was based as too vague, and the Supreme Court supported him. The Court ruled the definition “crime of violence” in the Immigration and Nationality Act is too vague.

Dimaya had been convicted of two first-degree burglaries. The judge reviewing whether he should be deported considered whether he qualified as having committed a “crime of violence.” The INA says a crime of violence is a felony offense that “by its nature” involves a “substantial risk” that physical force may be used.

In siding with Dimaya, the Court analyzed the law in light of a recent ruling it had made.

In Johnson v. United States (2015), the Court ruled a provision of the Armed Career Criminal Act was too vague. That provision, it said, was very similar to this one – and they are both too vague on which to base a grave outcome.

The ACCA provision defined a “violent felony” as one “involving conduct that involves a serious potential risk of physical injury to another.”

When judges consider the definition (for both the INA and ACCA definitions), they must determine what the ordinary “nature” of the crime is. For example, in regards to a burglary, what does the “ordinary” case look like? Is it a silent burglary that never encounters anyone nor uses physical force? Or the wild burglary that involves physical force and harms people? Then, the judge must determine whether that ordinary case involves a substantial risk of physical force.

Thus, the court ruled Dimaya cannot be deported based on the INA definition.

Kagan’s majority decision had the support of 5 Justices, but several other Justices wrote separately to add their points/disagreements.

Justice Gorsuch, who agreed in the judgment and in most of Kagan’s reasoning, wrote separately to emphasize the importance of Due Process and fair notice. According to Gorsuch, the same strict rule against vagueness should apply to civil cases generally – not just the cases with grave results like deportation.

The government had argued that the strict rule against vagueness should only apply in the criminal context.  It said that deportation laws – being civil – should not be held to the same standards of determinacy. Kagan’s response relied on a 1951 Supreme Court ruling (Jordan v. De George) in which the Supreme Court already ruled deportation is grave enough to have the same vagueness standards required in the criminal context. Gorsuch went farther than that; he said all civil laws should be held to the same strict standards of being clear and definite and giving fair notice.

In dissent, Chief Justice Roberts says the INA definition in this case is not indefinite in the way that the ACCA provision was in Johnson. He argues (in many more words) that it’s really not that hard to visualize whether a certain offense carries a risk of physical force and that the wording of the INA provision helps judges in their analysis more than the ACCA provision that the Court ruled too vague. 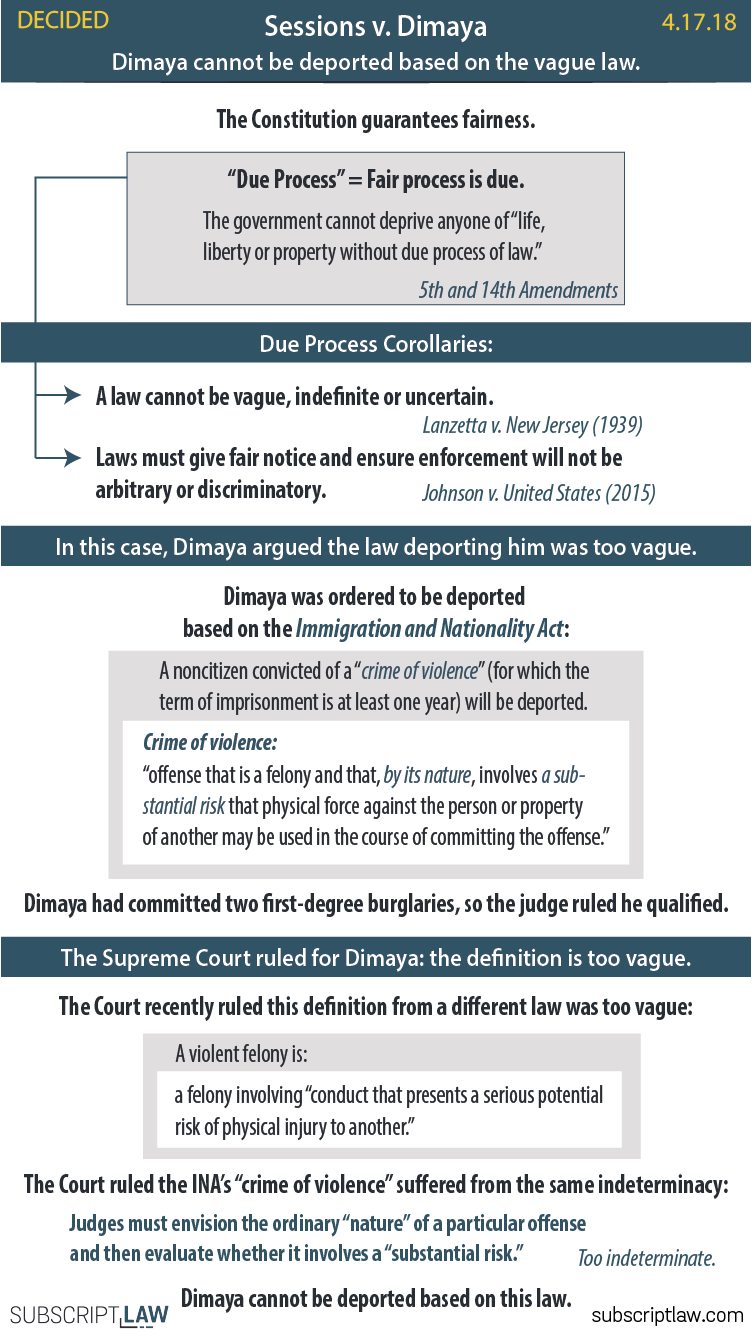