No one sees a duck here.

Wescley Pereira will argue the immigration provision at issue only gives way to one interpretation. That’s because if it’s ambiguous, the Supreme Court may apply Chevron Deference and side against him.

What is Chevron Deference?

Here. It’s our infographic on it.

In short, it’s a judicial policy that says a federal agency’s interpretation of an ambiguous legal provision will probably be the winning interpretation. Once a court finds a law ambiguous, the only other way around Chevron Deference is to show the agency is completely unreasonable in its view.

In Pereira’s case, the immigration agency has already interpreted the provision as contrary to his view. So he’ll be arguing the agency wasn’t just wrong but unambiguously wrong.

The provision Pereira is arguing about is one that could allow him to request cancellation of his deportation order. There’s a rule that says if a noncitizen has been living in the U.S. continuously for 10 years, then the person can apply to stay.

However – and it’s the however that Pereira is concerned about – if during that 10 year period, you received a notice to appear at a deportation hearing, then your period of continuous residence is stopped. You won’t qualify for “cancellation” of deportation  because you won’t have had a full 10 years.

Pereira arrived in the U.S. in 2000. At Year 6 of his residency here, Pereira received a notice that he should attend a deportation hearing. The notice was unspecific, though. It didn’t set the time and place.

Life went on. Actually, the following year, an immigration court would send Pereira another notice to appear (this time, with time and place) but Pereira never got it because it wasn’t set to the right place. It wasn’t until 2013 when Pereira was arrested for a motor vehicle offense that DHS detained him and started another round of proceedings.

But 2013 was after his 10-year period. Pereira argues he is eligible for cancellation. But only if that pesky 2006 notice won’t be held against him.

Text of the rule

See the infographic. You may find that Pereira’s interpretation has a good case.

When Pereira got the rejection, he appealed to the real federal courts (judicial courts). Usually, you have to finish the federal agency proceedings to get to a real court. But the real court  – the First Circuit Court of Appeals – applied Chevron Deference. Since the BIA had published a formal decision with the anti-Pereira interpretation, the court said it would have to comply.

Now the Supreme Court will have a chance to see if applying Chevron is appropriate. And Chevron is an issue the Justices love to talk about, so commentators expect interesting opinions. 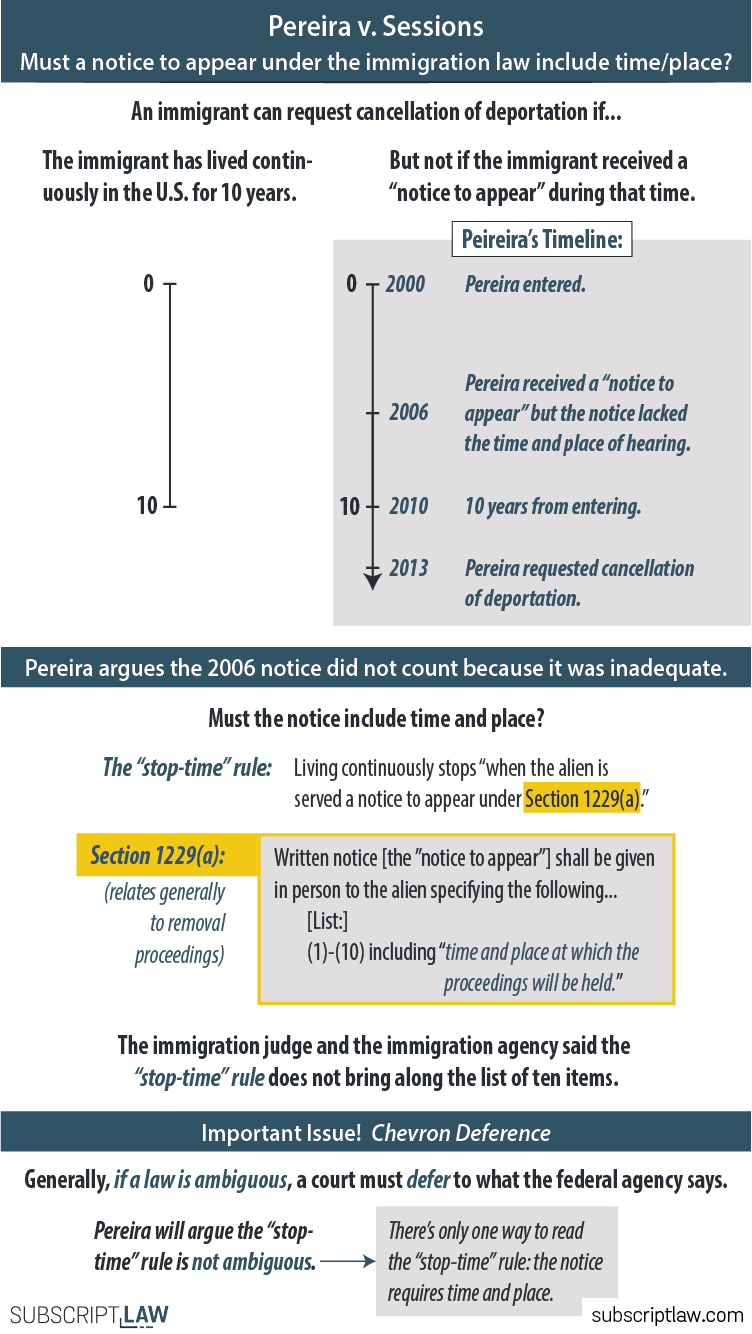