This case could have changed the entire structure of patent law… But it didn’t.

Oil States, an oilfield service company, had a patent on a piece of equipment and a process for protecting certain equipment used in hydraulic fracturing. Greene’s Energy Group, a competitor, challenged the patent using the inter partes review process. Greene’s argued that the patented piece and process should not have been protected.

The inter partes review process allows someone to challenge a patent if the patented innovation is either not novel or it’s obvious. Greene’s won the challenge. So Oil States lost its patent.

Not wanting to accept the fate of its patent, Oil States filed an appeal saying that the Patent Review Board – the court that adjudicated the dispute – didn’t have the authority to hear the dispute.

The Patent Review Board is part of the Patent and Trademark Office. That’s an executive agency, situated under the President, in the (to state the obvious) executive branch.

The Constitution created judicial courts to have exclusive authority over certain types of disputes. These days, however, it’s commonplace for executive agencies to have courts of their own. For example, if you have a dispute over a social security benefit, you will see a judge in the Social Security Administration. The Constitution does not prevent executive courts (vs. judicial courts) from adjudicating “public rights” that the government established to provide a benefit to society. The government created Social Security, so it also created a federal agency to help administer the program and to adjudicate related disputes.

However, certain other types of rights are categorically different. Think of a property dispute (like a dispute over land ownership), or a dispute over contract rights. These rights are between people (individual-to-individual). Since the beginning of time, the law (common law, as we call it) has protected individual rights. With or without a government scheme, they exist and they need protection.

Disputes over individual rights, or “Private Rights,” cannot be dished out to executive agency courts. If Congress has done so improperly, then we have to back up and erase the whole structure.

That’s what Oil States alleged in this case. It said that Congress, in establishing the Patent Review Board to hear inter partes reviews, gave an executive agency court improper authority to hear Private Rights.

The Supreme Court said no. Yeah, they’ve been around for a long time. But they only exist because the government has made a policy to protect innovations.

Thus, the Court ruled, the Patent Review Board can proceed in its patent reviews.

For more information on the background of judicial authority (including citations to cases on the public rights doctrine), see our earlier report on the case. 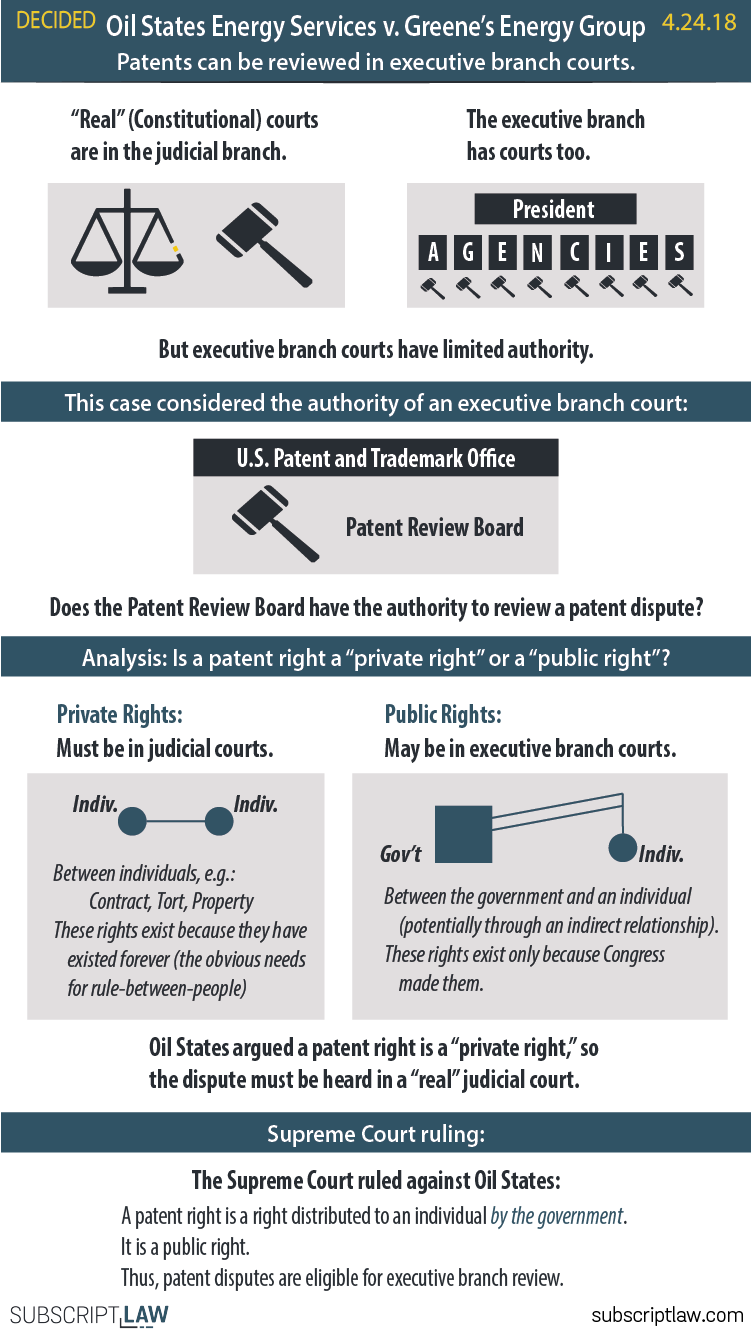