On June 21, 2021, the Supreme Court ruled against the NCAA, affirming the Ninth Circuit ruling which invalidated NCAA restrictions on certain education related benefits for college athletes.

For years, National Collegiate Athletic Association (“NCAA”) rules have limited the compensation college athletes can receive, both from NCAA member schools and from other sources. In this case, a group of current and former college athletes argued that the NCAA’s compensation limits are anti-competitive. They stand with a favorable ruling from the Ninth Circuit Court of Appeals and now defend that ruling before the Supreme Court.

The NCAA has approximately 1,100 member schools in three divisions (I, II and III), which are grouped into regional conferences.  Under the NCAA bylaws, college athletes are prohibited from receiving “pay” for participating in an NCAA sport but are permitted to receive certain forms of compensation that are considered “not pay,” including athletic scholarships known as “grants-in-aid.”  From 1976 to 2014, the definition of “grant-in-aid” was limited to tuition, fees, room, board and course-related books.  In 2015, the definition of “grant-in-aid” was expanded to include other expenses related to attendance up to the cost of attendance (“COA”) at each member school.

This case is brought by a group of current and former college athletes who played Division I Football Bowl Subdivision men’s football and men’s and women’s Division I basketball.  The college athletes argue that the NCAA’s rules limiting the amount of compensation that they can receive violate section 1 of the Sherman Act, a federal antitrust law, which prohibits agreements that unlawfully restrain trade and affect interstate commerce.

The NCAA defends its compensation limits by arguing that they are procompetitive because they drive demand for college sports as a product that is distinct from professional sports.

The Ninth Circuit affirmed the district court’s finding that the NCAA’s rules have significant anticompetitive effects in the market for the services of college athletes.  Specifically, the NCAA’s rules are anti-competitive because the NCAA member schools dominate the market and cap college athletes’ compensation at a level not commensurate with the value they create for college sports.

At the second step, the Ninth Circuit affirmed the district court’s finding that several of the NCAA limits (the COA limit on grants-in-aid, limits on compensation unrelated to education, and limits on cash awards for graduation) serve a procompetitive purpose: they preserve a distinction between college sports and professional sports by preventing college athletes from receiving unlimited payments akin to professional athletes’ salaries.  However, the NCAA’s limits on non-cash education related benefits did not serve that purpose, because those benefits cannot reasonably be confused with a professional athlete’s salary and actually emphasize the fact that college athletes are college students.

At the third step, the Ninth Circuit found that the district court had crafted an appropriate alternative that was less restrictive than the NCAA’s compensation limits.  The district court’s alternative was to: (1) allow the NCAA to continue to limit grants-in-aid at no less than the COA; (2) allow the NCAA to limit compensation and benefits unrelated to education, but (3) prohibit the NCAA from limiting education-related benefits other than academic or graduation-related awards and incentives (which could not be lower than the amounts allowed for athletic performance awards).  The Ninth Circuit also found that the district court’s injunction effectively implemented that less restrictive alternative.

The NCAA and its members appealed the Ninth Circuit’s decision.

The NCAA and its members argue that the district court should not have applied the “Rule of Reason.”  Instead, because the NCAA is a joint venture that requires collaboration between its members in order for its product (i.e., college sports) to exist, the court should have applied an “abbreviated deferential analysis.”  The NCAA argues that an abbreviated review is appropriate because the Supreme Court recognized in NCAA v. Board of Regents of University of Oklahoma (1984) that the NCAA “needs ample latitude” to play a “critical role in the maintenance of a revered tradition of amateurism in college sports.”

The NCAA then argues that under an abbreviated deferential analysis, the NCAA’s compensation limits should be upheld because they are reasonably related to preserving amateurism in college sports.

Third, the NCAA argues that the Ninth Circuit effectively required the NCAA to prove that its rules were the least restrictive way of achieving a procompetitive benefit. However, the Rule of Reason analysis requires only that the restraint be “reasonably necessary” or “fairly necessary” to achieve such a benefit.

Lastly, the NCAA argues that it and its members are acting as a joint venture because they are working cooperatively to produce a product (i.e., college sports) and absent their ability to limit compensation, college sports wouldn’t exist at all.  The NCAA also argues that upholding the district court’s injunction will have significant policy implications because in doing so, the Ninth Circuit has effectively authorized courts to micromanage joint ventures.

The college athletes argue that to the extent that Board of Regents requires the NCAA to be given “ample latitude,” the Ninth Circuit did so by applying the Rule of Reason to the NCAA’s limits on compensation because those limits are horizontal restraints on competition that would otherwise be per se violations of antitrust law.

In the alternative, the college athletes argue that even if Board of Regents could be read to hold that the Rule of Reason should not apply, stare decisis has less-than-usual force in antitrust cases and should have even less force here because the market for college sports has dramatically changed since Board of Regents.

The college athletes also argue that the NCAA’s request for “abbreviated deferential review” is effectively a request for an antitrust exemption, and that the Supreme Court has only ever used such abbreviated reviews to condemn restraints, not to uphold them.

Second, the Ninth Circuit did not require the NCAA to prove that each type of its challenged rules had procompetitive benefits. It considered the NCAA’s compensation scheme as a whole and found the NCAA’s rules limiting compensation unrelated to education served a procompetitive purpose while limits on non-cash education related benefits did not. In fact, rather than increasing the NCAA’s burden, the district court lightened it by allowing the NCAA to justify its anticompetitive restraint in one market (for the services of college athletes) with a procompetitive effect in another (for college sports).

Third, the Ninth Circuit did not require the NCAA to prove its restraints on competition were the least restrictive way to achieve a procompetitive benefit. Rather, the district court required the plaintiffs to show that the NCAA’s restraints were patently and inexplicably stricter than necessary to achieve the NCAA’s procompetitive purpose. The plaintiffs did so, and the Ninth Circuit found the district court’s injunction is a viable alternative that will be virtually as effective at achieving that purpose.

Next, the college athletes argue the Ninth Circuit’s decision does not invite courts to micromanage joint ventures. The injunction allows the NCAA to continue to limit compensation unrelated to education and academic and graduation incentives. In addition, each of the conferences can impose their own limits on both education-related and non-education-related compensation.

The case will be argued on March 31.

On June 21, 2021, the Supreme Court unanimously affirmed the Ninth Circuit’s decision, which upheld the district court’s injunction on the NCAA’s limits on education-related benefits paid to college athletes.

The Supreme Court found that the district court had properly applied the “Rule of Reason” to analyze the NCAA’s limits on college athletes’ compensation.  The NCAA argued that its compensation limits should be subject to an abbreviated “quick look” review, but the Court rejected that argument.  The Court explained that a “quick look” may be appropriate for restraints “necessary to produce a game” but that the NCAA’s compensation limits did not fall into that category.  The Court also noted that language from its decision in NCAA v. Board of Regents relied upon by the NCAA did not suggest that a “quick look” was appropriate, because that case did not challenge the NCAA’s compensation limits.  Although the decision in Board of Regents assumed the NCAA’s limits were procompetitive, it made no finding on that issue, and the market for college athletes has changed dramatically since that decisionwas issued in 1984.

The Court also rejected the NCAA’s argument that its compensation limits should be upheld without any further analysis because they serve important social objectives, noting that the Court has consistently rejected similar arguments in other cases, and the NCAA’s arguments that such objectives warrant an exemption from antitrust laws should be addressed to Congress, not the Courts.

Finally, the NCAA argued that the district court’s injunction was an attempt to micromanage the NCAA’s business.  The Court found that the injunction was appropriately narrow and would not intrude on the NCAA’s business, because the district court’s injunction only applies to education-related compensation and benefits provided by conferences or schools and was based on a finding that the injunction would not blur the distinction between amateur and professional sports and was a significantly less restrictive means of achieving the NCAA’s procompetitive objective of preserving consumer demand.

Justice Kavanaugh concurred in the judgment but wrote separately to note that although the Court’s decision only addressed the NCAA’s limits on education-related benefits, its other compensation limits also raised significant antitrust concerns.  He noted that the majority’s opinion makes clear that the NCAA’s other compensation limits should also be analyzed under the rule of reason and suggested that it is questionable whether they would be upheld under such an analysis.  He explained that the NCAA’s logic – that it can agree not to pay college athletes a fair market rate on the theory that their product is defined by not paying a fair market rate – is entirely circular and would not be permitted in any other labor market. 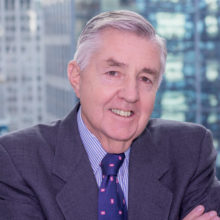 Jim Quinn is an accomplished trial lawyer who is Of Counsel at the New York office of the law firm Berg & Androphy and served for many years as head of the Litigation Department of the international law firm of Weil, Gotshal & Manges. Mr. Quinn specializes in high-stakes commercial disputes. He has practiced in all areas of complex litigation and alternative dispute resolution, with particular emphasis on antitrust, securities, false advertising, sports, entertainment, patent and related complex intellectual property litigation.

Jim Quinn is an accomplished trial lawyer who is Of Counsel at the New York office of the law firm Berg & Androphy and served for many years as head of the Litigation Department of the international law firm of Weil, Gotshal & Manges. Mr. Quinn specializes in high-stakes commercial disputes. He has practiced in all areas of complex litigation and alternative dispute resolution, with particular emphasis on antitrust, securities, false advertising, sports, entertainment, patent and related complex intellectual property litigation.