On June 23, 2021, the Supreme Court ruled for B.L. and against the school district. The First Amendment protects B.L.’s speech and thus the school did not have the right to suspend B.L. from the cheerleading team based on her speech.

The way we communicate has changed greatly over the last generation. Today’s students spend much of their time communicating in virtual forums. But, the U.S. Supreme Court has been slow to catch up to these changes.

Now the U.S. Supreme Court may finally answer a question that has been percolating in the lower courts for over a decade: can public school administrators punish students for speech that occurs on social media outside of regular school hours?

A Pennsylvania public school student (B.L.) was upset when she did not make her school’s varsity cheerleading squad and was relegated to another year on J.V. So, that weekend she did what many frustrated people do in this situation- she decided to vent. But, she did it the way that most 21st century teenagers do it now- through social media. She expressed her discontent on Snapchat with the post “fuck school fuck cheer fuck softball fuck everything.”

The message ended up going beyond her network of friends. One concerned student showed it to her mother, who was the cheerleading coach. The coach decided to punish B.L. for violating the team rules about respect, and B.L was suspended from the JV team for a year.

B.L. then sued the school for violating her First Amendment rights. The Third Circuit ruled in favor of B.L., holding that the student’s off-campus speech was not a direct threat nor did it directly disrupt the school.

For most of American history, students had no rights in schools. But, fifty years ago in the case of Tinker v. Des Moines Independent Community Schools (1969), the U.S. Supreme Court held that students do not lose their “constitutional rights to freedom of speech or expression at the schoolhouse gate.” A school could only restrict or punish student speech if there was articulated evidence that the speech violated the rights of others or would “materially and substantially interfere with the requirements of appropriate discipline in the operation of the school.”

But, Tinker was the apex of student speech protection. Over the next 40 years the U.S. Supreme Court continued to chip away at the rights of students. In 1986, in Bethel School District v. Fraser, the Court held that public schools could regulate lewd and indecent speech on campus. In 1988, the Court held in Hazelwood School District et al. v. Kuhlmeier et al., that public schools could regulate student media if the censorship was related to pedagogical purposes. In 2007, the U.S. Supreme Court held in Morse v. Frederick that schools could censor speech that promoted the use of drugs.

Today, the Tinker Test is most likely to protect student speech if it is political in nature, but with other types of speech, it is much easier for administrators to find a way to show it is disruptive. Censorship of student speech became more accepted over the last generation as the threat of cyberbullying and school shootings has increased. Schools have been more forceful in their regulating of student speech under the guise of student safety lowering the need for clear evidence of disruption. But at the same time, technology has advanced.

The advent of the internet and social media has made speech that was once exclusive to off campus and weekends now spill over into the regular school day. Though this has been an issue since the beginning of this century, the U.S. Supreme Court has not resolved the question as to whether schools can regulate speech that occurs off campus outside of school hours. Lower courts have been split on their outcomes, but most of them have applied the Tinker Test to determine whether the off-campus speech materially interferes with operation of the school.

The school argues that the Tinker Test does not specify where the speech needs to take place; only that the speech has to cause a substantial disruption of school operations. The school makes an analogy to school employees who can be punished for off-campus actions that are detrimental to the school community. It argues that treating students differently would violate First Amendment’s prohibition against speaker-based discrimination.

The school argues that allowing for the lower court ruling in favor of the student undermines the efficacy of school operations, because so much of student interaction — including with teachers — happens outside of school and in virtual spaces. Though much of this speech is benign, too much of it is bullying that can interfere with the lives of students and faculty, leading to poor grades, faculty quitting their jobs, students quitting their teams, and worst of all — suicides. To hold that the Tinker Test does not apply to off-campus speech would upend decades of school actions that regulated off-campus conduct as well as state and federal laws that mandate safe school environments for learning.

The student is arguing that the Court should not expand Tinker to apply to off-campus speech as it has no grounding in the original case. Young people have free speech protections outside of school and a Tinker is a narrow exception to that right. Opening students up to arbitrary and subjective censorship outside of school would cause a chilling effect on speech as administrators could always make a connection when it comes to speech it does not like.

In the alternative, the student is arguing that if the Court expands Tinker, it should only be in the context of threats or other speech that directly interfere with the school’s operations.

The student argues that the Third Circuit correctly analyzed the facts in this case as the school administration did not present any evidence that the off-campus speech was disruptive to school operations. The students’ speech, though profane in nature, was not directed at the school, nor was it threatening. She also posted the message on the weekend to her personal network on a platform designed to not permanently record the message.

On June 23, 2021 the Supreme Court ruled in favor of a student who sued a school after it punished her for comments she made on her social media account outside of school hours.

A Pennsylvania public school student (B.L.) was upset when she did not make her school’s varsity cheerleading squad and was relegated to another year on J.V.  During a weekend she expressed her discontent on Snapchat with the post “fuck school fuck cheer fuck softball fuck everything.”  The message ended up being seen by her cheerleading coach.  The coach decided to punish B.L. for violating the team rules and suspended her from the JV team for a year.  B.L. then sued the school for violating her First Amendment rights when it punished her for speech made outside of school.

Questions in the Case

The question before the Court was whether the Tinker rule applies to speech that occurs off-campus and outside of school hours.  If so, to what extent would Tinker rule apply to such speech?

The U.S. Supreme Court ruled that in this instance, the school could not punish the student’s speech.  But, the Court explained that public school administrations can punish student speech that occurs off-campus, but only in very limited circumstances.  The opinion gave possible examples such as cyberbullying, school sponsored travel and homework, but the Court refused to make a clear-line rule or exhaustive list.  Instead it held that when it comes to off-campus speech, “the leeway the First Amendment grants to schools… is diminished.”   The reasoning was that allowing schools such broad authority to regulate off campus speech would expose most student speech to regulation, including unpopular student speech.  The Court stated that regulation of student speech outside of school should remain in the domain of parents.

The Court then turned to facts of this case.  First, it concluded that this student’s speech was the type of speech that would be protected if an adult said it.  Next, since the speech was posted outside of school grounds and hours, the school had limited jurisdiction to regulate it.  Moreover, the Court did not find any significant evidence that the speech caused a disruption to the school operations.  Even speech on arguably trivial matters deserve full First Amendment protection.

Justice Thomas dissented from the majority making an originalist argument that First Amendment protections did not extend to children at the adoption of the Fourteenth Amendment. 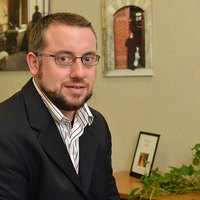 Jason Zenor is an associate professor in the School of Communication, Media and the Arts at Oswego State University of New York, where he teaches communication law.

Jason Zenor is an associate professor in the School of Communication, Media and the Arts at Oswego State University of New York, where he teaches communication law.