This case has been decided.

How will criminal law compensate the victim of Lagos’ fraud?

Sergio Lagos ran a trucking company that tricked a credit provider into providing tens of millions of dollars of loans. Lagos’ company, USA Dry Van Logistics, altered its records to make the company look to be worth much more than it was. General Electric Capital Corporation (GECC), not recognizing the fraud, incurred around $15 million in losses.

Around $5 million of the losses are at issue here. The U.S. government prosecuted Lagos, and Lagos admitted to the fraud. Criminal law proceedings are geared primarily towards punishing the offender because they are brought by the government on behalf of society as a whole. They are not as focused on compensating the victim as civil cases are. Nevertheless, criminal law provisions allow for victims to be compensated to an extent.

The issue here is whether certain losses suffered by GECC are covered (i.e. payable to Lagos) under a particular law: the Mandatory Victims Restitution Act.

What were GECC’s losses for?

First and primarily, GECC lost $11 million in loans it provided to Dry Van that were never repaid. Criminal law definitely will order Lagos to pay GECC back for that. That’s not in dispute.

The contested losses, however, were incurred more indirectly by GECC as a result of Lagos’ fraud. Because of Lagos’ fraud, GECC ended up conducting an internal investigation. It hired lawyers and consultants to try to figure out what went wrong and the extent of the problem. Also as a result of the fraud, Dry Van went bankrupt and GECC was made a creditor. GECC incurred costs (in hiring lawyers, etc.) in attending the bankruptcy proceedings.

This case is about whether the losses incurred for the internal investigation and the bankruptcy proceedings are covered by the law allowing for compensation.

What does the law say?

The relevant provision of the MVRA says a victim can get “lost income and necessary child care, transportation, and other expenses incurred during participation in the investigation or prosecution of the offense or attendance at proceedings related to the offense.”

If you stop reading at “lost income and necessary child care, transportation, and other expenses…” you might think GECC’s losses seem completely different. That’s Lagos’ argument. The “other expenses” must be similar to the ones listed before the catch-all. The phrase is meant to cover incidental losses incurred while participating in a government investigation (working with the investigators, serving as a witness at trial). While a bankruptcy proceeding and an investigation the company decided to make on its own are “proceedings,” the provision is only talking about the criminal proceedings that the victim is required to attend to help out the government in the government’s investigation.

The United States argues that the provision should be interpreted literally. GECC was forced to perform an internal investigation and to attend bankruptcy proceedings as a result of Lagos’ fraud. Therefore, the costs incurred were “necessary” and they were incurred “during attendance at proceedings related to the offense.”

In civil cases, indeed, restitution is as strong as “making the victim whole.” However in criminal law, the only compensation that can be ordered to victims is that which is explicitly defined in the law (like the provision being considered here).

The Court will have to decide if the criminal law intended to make a broad (civil-like) “restitution,” or if it will construe the language narrowly, as Lagos argues. 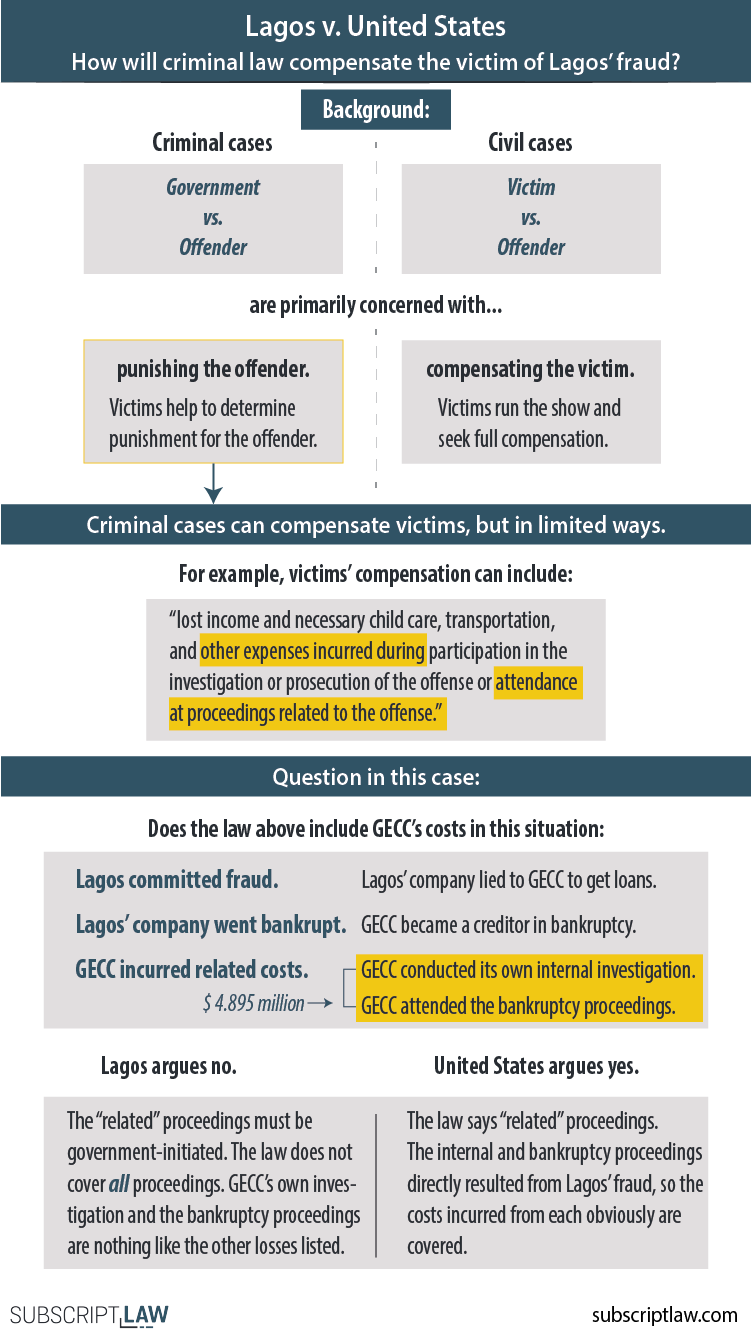