The Supreme Court Justices duke it out over detention periods for noncitizens.

Justice Alito wrote the opinion of the Court in Jennings v. Rodriguez, but disagreement among the justices was high on this one. Breyer felt so strongly against the Court’s opinion that he read from his dissent on the bench.

The justices disagreed about whether an immigration law was ambiguously written. If it was ambiguous, the Court might have been able to imply protections against unreasonably long detention periods for noncitizens. If not, as the Court ultimately decided, the detainees would not be entitled to implied limitations on detention periods.

Alejandro Rodriguez, a Mexican citizen and lawful permanent resident of the U.S., was arrested in 2004 for a drug offense and vehicle theft. His immigration proceedings determined he would be removed. While he appealed the decision, he remained in detention. In 2007, Rodriguez filed a petition arguing he should not be left in jail for that long. A few provisions of the Immigration and Nationality Act are relevant here.

None of these provisions mentions that the noncitizens can only be held for “reasonable” periods of time. Only the last one even mentions bond, or suggests that the detainees might get a bond hearing.

The Constitution, however, includes a general principle protecting individuals’ liberty. In many of these cases of detention, the noncitizen will end up winning the case and staying in the country. But the result comes after months or maybe years of detention. Is that fair?

That’s the constitutional question, but the appeals court in this case did not decide the issue based on the Constitution.

Courts are not supposed to make new law, but they are allowed to interpret it reasonably. “Constitutional avoidance” is a “canon” (a method) courts use to interpret laws. If the law is unclear and the court can tip the scales by interpreting the law to avoid a serious constitutional problem, then that’s the interpretation the court should use.

The Supreme Court ruled Constitutional Avoidance should not have been used in this case. Constitutional Avoidance only works when the law is unclear. The Supreme Court was unwilling to read ambiguity into the detention provisions. The Court overturned the 9th Circuit decision granting the detainees rights to bond hearings. The Court did not decide whether Rodriguez and the other detainees have a good constitutional argument. It’s possible that argument will be evaluated in the lower courts next.

The dissent (Breyer, joined by Ginsburg and Sotomayor) found the statute ambiguous so that detention limits could be implied. The dissent argued that reading the immigration provisions without reasonable time limits would present a “grave” constitutional problem. 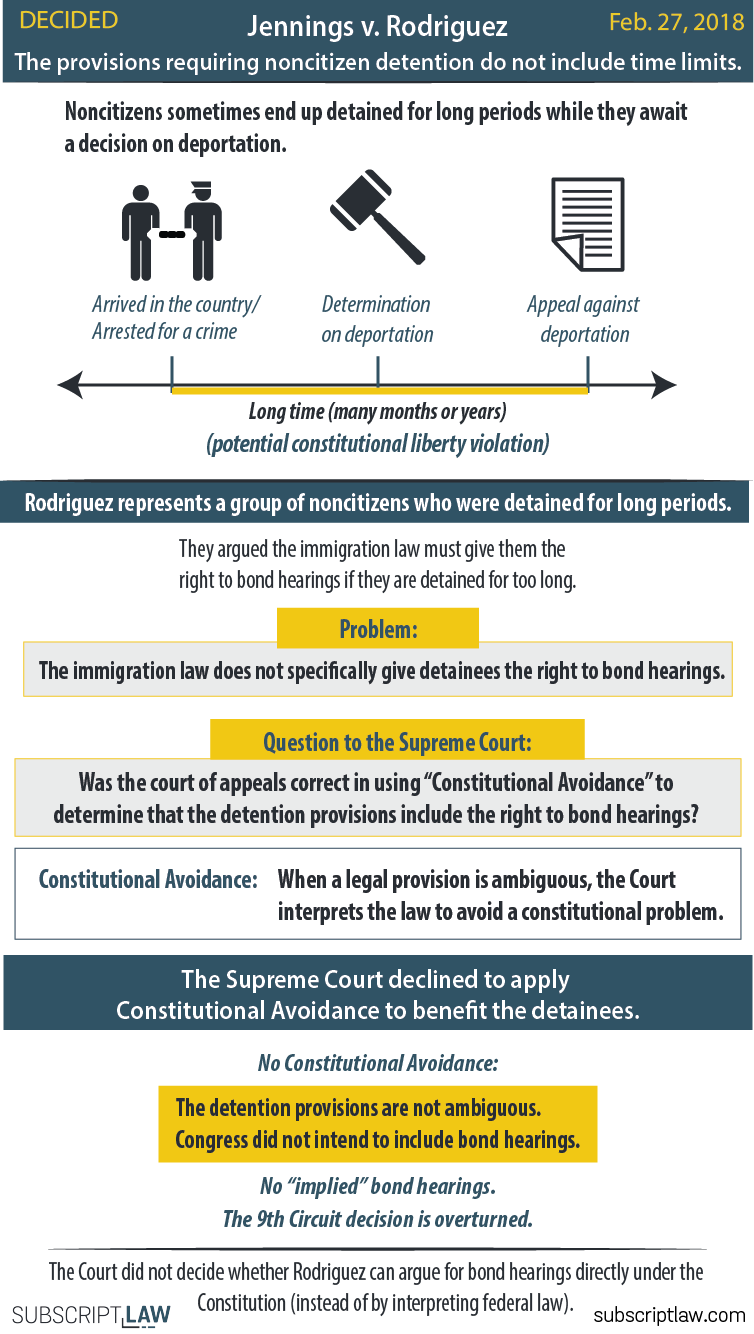