Erik Brunetti runs a clothing line displaying the word “FUCT.” He applied for a trademark on his genius phrasing and the Patent and Trademark Office rejected him. Brunetti sued, arguing the law banning trademarks of “immoral or scandalous matter” violates the First Amendment.

On Monday the Supreme Court agreed with Brunetti. The law should not discriminate based on viewpoint, and the ban against trademarks of “immoral or scandalous” matter does just that.

The Lanham Act of 1946 sets out the rules on what the government can trademark. It prohibits trademarks that:

[consist] of or [comprise] immoral, deceptive, or scandalous matter; or matter which may disparage or falsely suggest a connection with persons, living or dead, institutions, beliefs, or national symbols, or bring them into contempt, or disrepute.

The federal government takes the words “immoral” or “scandalous” together to form one rule against “immoral or scandalous” matter.

The USPTO rejected Brunetti’s request for a patent by relying on the rule against scandalous and immoral matter. The Board decided FUCT was the slang equivalent of the past tense of the word “fuck,” noting FUCT is FUCKED’s phonetic equivalent. Furthermore, the Board explained:

Mr. Brunetti used the mark in the context of “strong, and often explicit, sexual imagery that objectifies women and offers degrading examples of extreme misogyny,” with a theme “of extreme nihilism—displaying an unending succession of anti-social imagery of executions, despair, violent and bloody scenes including dismemberment, hellacious or apocalyptic events, and dozens of examples of other imagery lacking in taste.”

In conclusion, FUCT is a vulgar word, and federal precedent allows the USPTO to prove scandalousness by showing vulgarity. Thus, no trademark for FUCT.

Brunetti appealed the USPTO ruling denying his trademark application. Brunetti argued the First Amendment protects exactly the type of speech he is making with the word FUCT. The government cannot deny his expression based on taste and value judgements. That’s viewpoint discrimination. Even if it’s merely content-based discrimination (which the government concedes), the rule against scandalous matter cannot stand. 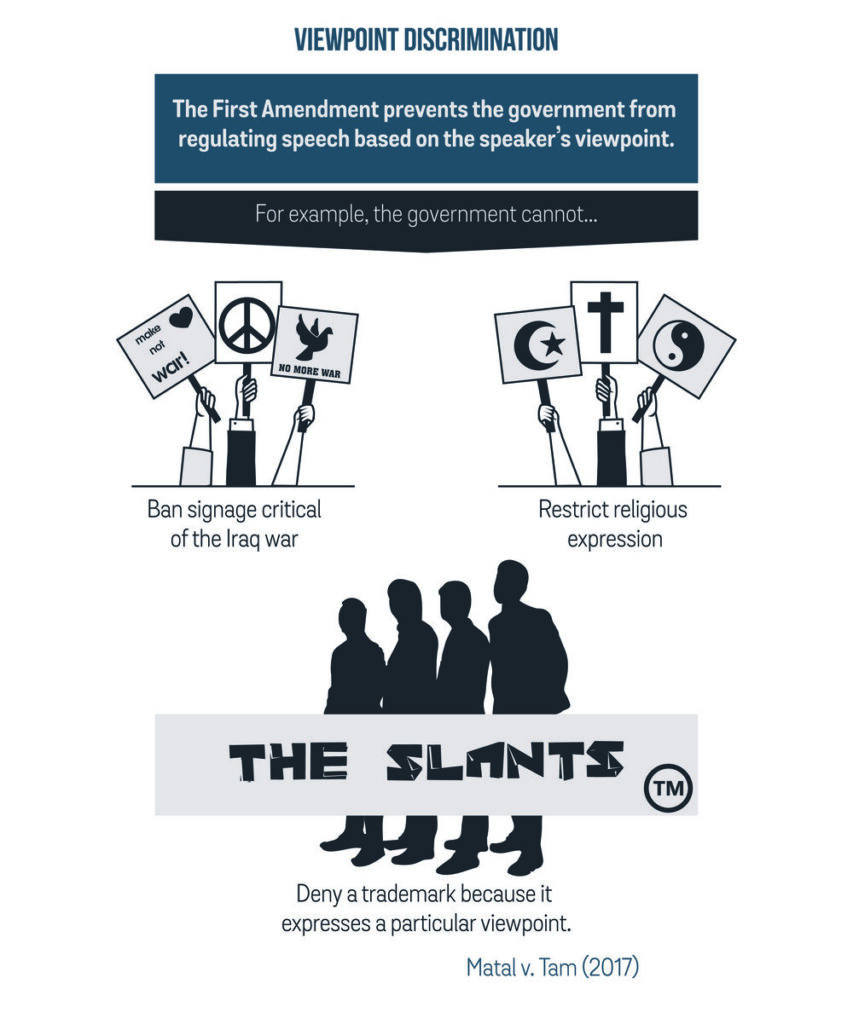 Brunetti had a strong card to play. In 2017, the Supreme Court questioned a trademark rule that comes within the same paragraph containing the rule against scandalous and immoral matter. In Matal v. Tam, the Supreme Court considered a challenge by an individual seeking to register a trademark on his band name, The Slants. The USPTO had determined the band name “disparaging” in violation of the rule. Tam convinced the Supreme Court that the Disparagement Clause in the same Lanham Act rule was viewpoint discrimination and should not be upheld. Brunetti argued the “immoral and scandalous” rule must have the same fate.

The government’s defense of the rule

The USPTO sought to weave its way through First Amendment rules to argue the trademark rule is valid. The government argued that its trademark program does not restrict speech. In fact, Brunetti is still free to use the word if he wants. The program rather is a government benefit, and the rule is a condition on access to the benefit. The government argues it should have a choice on whether to promote certain marks, and the rule evidences its preference in promoting marks that are suitable for all audiences (like children). The government preference is tied to its interest in the “orderly flow of commerce.”

The Court majority ruled for Brunetti. It simplified the First Amendment analysis by using the viewpoint discrimination analysis of Matal v. Tam. The ban on “immoral or scandalous” matter also discriminates based on viewpoint, the majority said:

The statute, on its face, distinguishes between two opposed sets of ideas: those aligned with conventional moral standards and those hostile to them; those inducing societal nods of approval and those provoking offense and condemnation.

The government cannot make judgements on what is moral, the Court said. The law appears (“on its face”) to discriminate based on viewpoint, and the PTO applies it in a viewpoint-discriminatory manner. For example, the Court says, the PTO has used the provision to reject marks with messaging that appears to support drug use, while allowing messaging that disapproves of drug use. The provision was used to reject marks that use religious references with drugs and alcohol because Christians would be offended, but the PTO has allowed marks that convey “proper” religious messaging.

The Justices who did not join the majority opinion disagreed with the Court’s decision to analyze “immoral and scandalous” together. The two words are different, and they aren’t even listed next to each other in the Lanham Act. The Lanham Act prohibits: “immoral, deceptive, or scandalous matter.” The majority considered the words together because the PTO has always considered them as one rule against “immoral and scandalous” matter. But the outlying Justices would have broken them up.

Roberts, Sotomayor and Breyer would have stricken a ban against “immoral matter” but left a ban against “scandalous matter” in tact. Each of them wrote separately and had somewhat different rationales, but they all believe the government has the right to ban obscene, vulgar or profane marks, which is how they would have interpreted the ban against scandalous matter. Regarding banning “immoral matter,” they would have come to the same result as the majority: the ban could not stand. 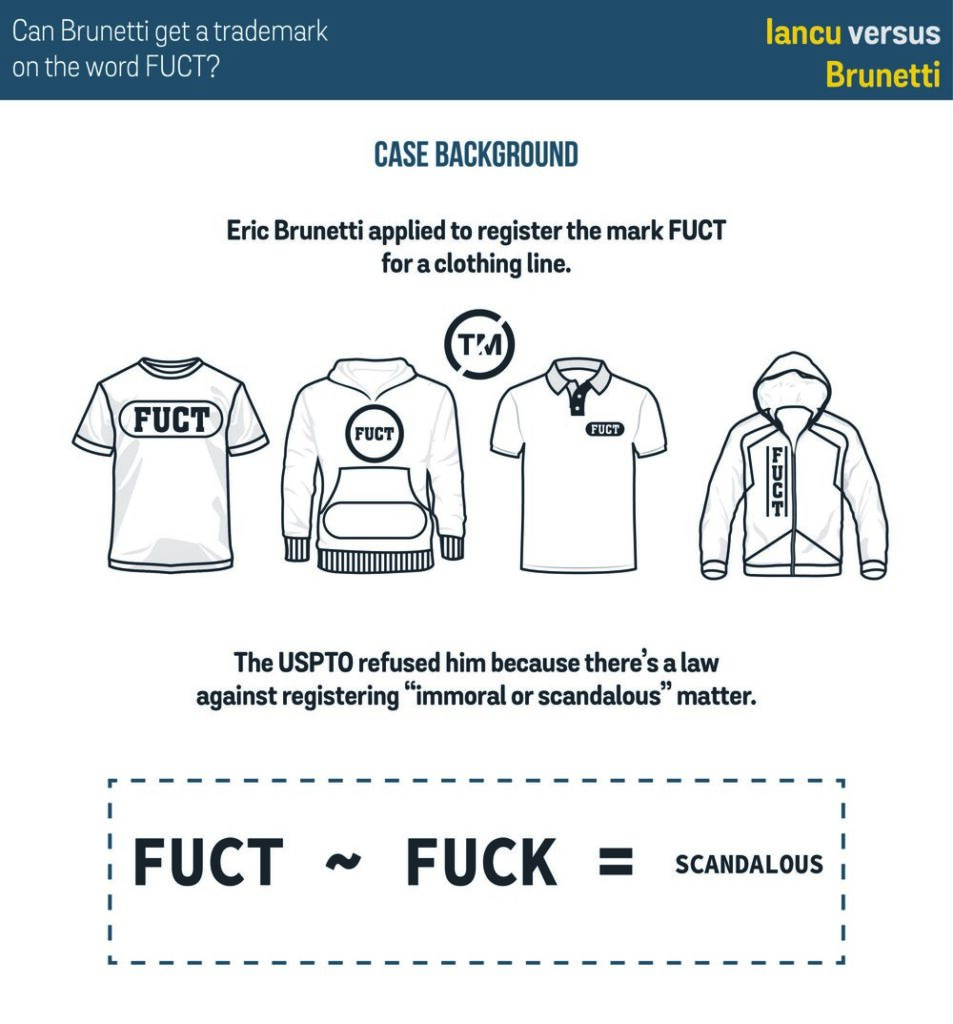