Florida and Georgia have been fighting for years over water in the Apalachicola-Chattahoochee-Flint River Basin. It’s the meeting point of three rivers. In the early 1990s, the states negotiated for 5 years but were unable to make an agreement over usage of the river water. Since the water flows south, Georgia has the upper hand.

In 2013, Florida sued Georgia for using up too much of the water. Florida says it needs the water to preserve its ecosystems and economy in its Apalachicola Region. Florida wants the Supreme Court to limit Georgia’s use of the water.

Nevertheless, the Supreme Court doesn’t usually meddle with facts and all of the usual evidence-type things that trial courts do. They are legal analysis experts, and they are more accustomed to reading briefs on legal issues, rather than deciding which kinds of evidence should be submitted. They appointed a Special Master to do the trial-type work.

After a lengthy process of gathering evidence and hearing sides from the parties, the Special Master came to a conclusion. The Special Master submitted his report to the Supreme Court, to decide whether his recommendation would be approved.

The Special Master recommended that the case against Florida be dismissed. But not because he was finished with the trial. It’s because he decided Florida could not meet a preliminary hurdle: redressability.

Redressability is the type of thing the Justices (but nearly no others) are quite comfortable with. It’s an abstract legal concept that comes from the Constitution. The Constitution says that courts can only hear “live cases or controversies.” What’s that? It would take years to explain in full, but as for how it relates to this this specific issue: Courts cannot hear theoretical cases. Courts cannot make rulings that would have no use. So if a court determines thats its power to issue an order would not actually remedy (or REDRESS) the plaintiffs’ problem, then it will dismiss the case – before even finishing the trial.

The Special Master determined that a court order would not remedy Florida’s water issue. Georgia isn’t the only party using the water in those rivers. In fact, the federal government’s Army Corps of Engineers runs several dams along the big river, the Chattahoochie, and the Army Corps is not in the case. So the Special Master said, we should stop the case right now before we make a ruling that turns out not to even help Florida. And that’s what he recommended to the Supreme Court.

Meanwhile, Florida had been arguing that even with the Army Corps’ dams, more water past Georgia into the rivers would mean more water out to Florida. Furthermore, the other river, the Flint River, didn’t have any Army Corps dams.

The Court ruled that the Special Master had put too high of a bar on Florida at this preliminary point in the litigation. A party does not need to prove everything to defeat redressability. The Special Master had said Florida needed to show by “clear and convincing evidence” that the remedy would work; Florida had to guarantee that the Army Corps would let water pass.

But that’s too much. The Supreme Court ruled that Florida only needed to show that using “flexibility and approximation,” it will “likely prove possible” to fashion a court decree that would resolve its problem. And Florida had done that. To require any more would be “putting the cart before the horse.”

The effect of the ruling? The case will go back to the Special Master to figure out the rest of the evidence and sort through the arguments. Only after the full process will the Special Master use a “clear and convincing” standard to decide if it will – in the end – make an order in favor of Florida.

Not quite a case resolution, but a lifeline for Florida in this long-standing dispute. 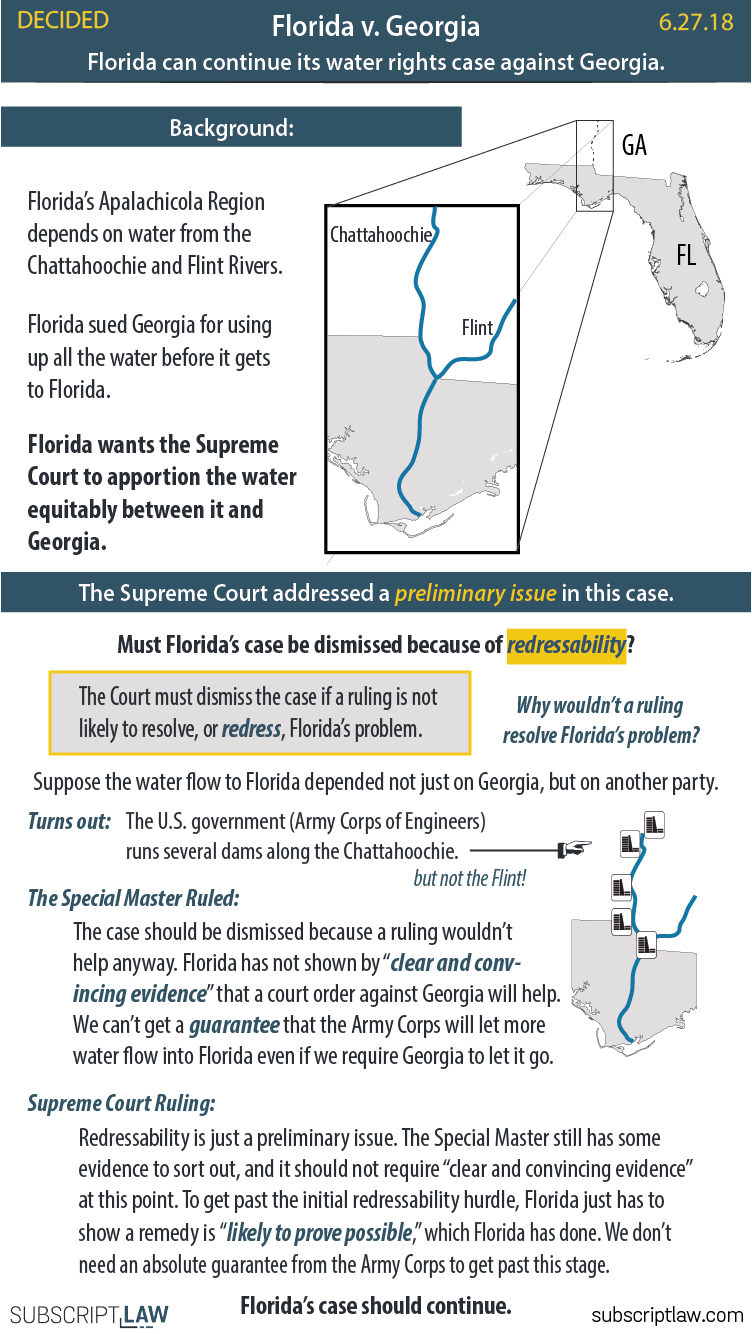