The Flores Settlement: setting standards on child detention since 1997

President Trump’s new harsh stance on immigration has many undocumented adults facing prosecution. And if they crossed the border with their children, the children may get separated and detained. The government wants to hold them until the immigration system figures out what to do with the parents.

Federal law doesn’t detail government standards for detaining immigrant children. But there is a court ruling from 1997 that sets the boundaries, including time limits on detention periods for minors. Trump’s immigration agency seeks exception from some of the rules of the 1997 agreement. On July 9, 2018, the government’s request was denied.

In 1984, the U.S. government (the Immigration and Naturalization Service) instituted a policy of detaining children, particularly if the government suspected the parents were undocumented and living in the U.S. The children would only be released if the parent came forward for interrogation and ultimately, likely deportation.

The children complained they were held in detention where they were required to share sleeping quarters with unrelated adults. They were given no educational instruction, no reading materials and no supervised recreational activities. The children could be held for long periods, perhaps indefinitely.

Civil rights lawyers represented the children in a class action suit (which came to be known as the Flores case, after one of the class representatives, Jenny Lisette Flores). The case argued the conditions of detention violated the Constitution and federal law. The battle was long, at one point reaching the Supreme Court, and finally in 1997 the parties reached a settlement.

In 1997, the U.S. and class litigants agreed on certain standards that detention facilities for minors must meet. They must be qualified by child welfare agencies. The settlement also set strict time limits on how long children can be detained. They must be released after 5 days, and in cases of influx, the time period can be extended to 20 days. Here are some more details of the settlement. And the settlement itself.

Settlements are legally binding just like any other law. Sometimes when a court orders a settlement between Party A and Party B, the order will affect just those two parties. But in this case, Party A was the U.S. government, and Party B included all children detained by the INA. When the Flores Settlement went into effect, it had much larger repercussions. And it continues to control the government today. The government actually had the chance to set the same Flores rules into federal regulations, which would have ended control of the Flores Settlement. However, the government never did that, presumably not wanting to cement the stringent Flores standards into federal law.

Trump isn’t the only President who has asked for an exception to the Flores Settlement. In 2015 Obama did too.

In 2015, the Obama administration faced an influx of immigrants – parents with children – from Central America. Because the Flores case was based on children who had come to the U.S. unaccompanied by their parents, the U.S. at the time requested an exception. The new context of parents and children arriving together presented different circumstances. The U.S. would have to argue either that the Flores Settlement didn’t cover cases of accompanied minors, or that the settlement didn’t contemplate this circumstance. Alternatively, the government argued that the influx was unique and also uncontemplated. The court ruled against the government on all arguments and found the government in breach of the agreement.

This time it was the Trump administration seeking an exception to Flores. The government wanted to be unbound by the time limits and also the facility standards. However, finding no unique arguments as from the 2015 request, the court denied the request. The government had tried to convince the judge that if the children’s parents are detained, then the government cannot release them without having the children detained along with their parents (facilities which do not meet child welfare standards). The judge said that the government could very well release the children as Flores requires, if the parents would be released on bail to receive the children.

The Flores Settlement: setting standards on child detention since 1997 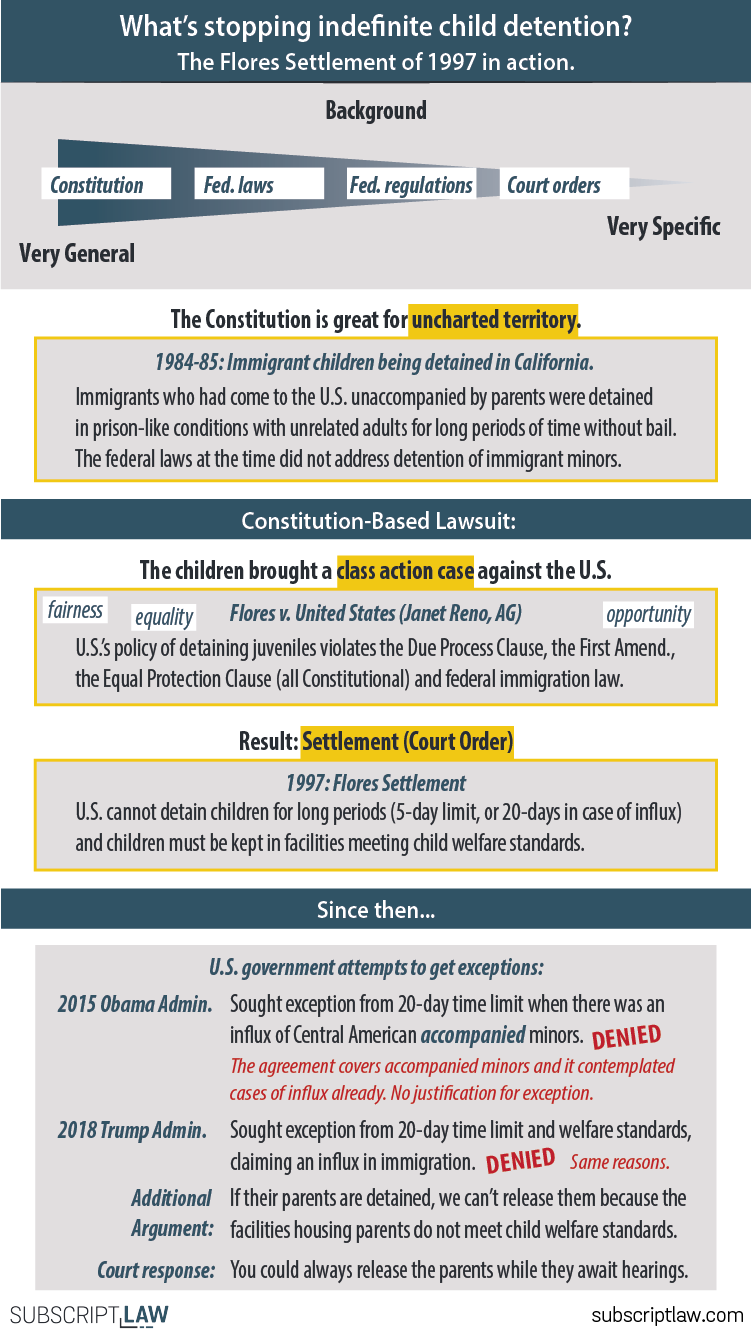